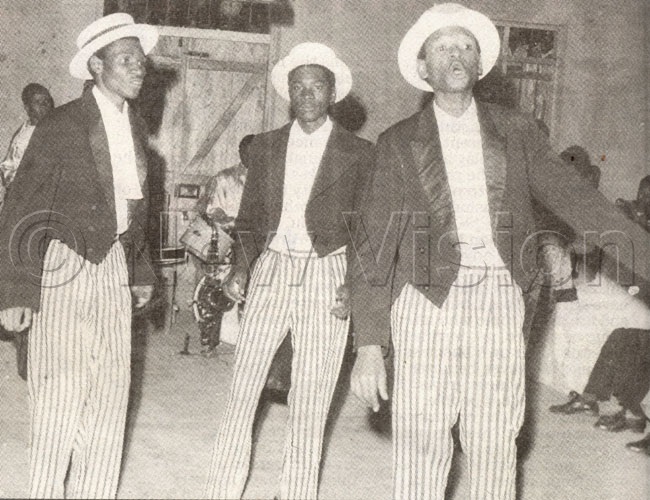 IN THE PICTURE ABOVE: Shelton (centre) and band members at Makerere University’s Main Hall in 1960

They came. They saw. They conquered. More than half a century ago, four young musicians left their home in Southern Rhodesia (now Zimbabwe) for a tour of East Africa.

At the end of the tour, which took them through Northern Rhodesia (Zambia), Malawi, Congo and Kenya, someone mentioned Uganda, a country they had never heard of. The musicians decided to pay it a visit. They ended up staying for good.

‘We had never seen such a green country, such beautiful people,’ Shelton Shezy Handu Mazowe, 84, recalled his first impression of Uganda which, 50 years on, he still cherished. Smitten by the country’s beauty, they decided to settle here.

In keeping with the African saying that: ‘If your host considers dog meat a delicacy, you have to follow suit,’ the trio went on to embrace the culture of their adopted country with such enthusiasm, and ended up becoming more Ugandan than the natives.

Henry And Ann On Their Wedding Day

Henry married Ann, the daughter of the then Bishop of Namirembe, Dunstan Nsubuga. Shelton had 10 daughters with several Ugandan ladies. A daughter, Sharon Mazowe, became Miss De Modele in 1996, while a step-daughter, Olga Nampiima, went on to become Miss Uganda 1992. Another daughter, Sharlotte, was a model with Eladam and Modele Mama fashion houses.

Meanwhile Richard, a wonderful chef, married a Ugandan lady and set up a home in Kawempe, where he run a popular restaurant.

Yet, if it had not been for the persistence of one man Shelton and his ‘siblings’, as he fondly refers to them, they would never have discovered Uganda.

Shelton At The Grand Imperial Hotel On February 14, 2007

‘It was Corporal Ahmed Oduka, a member of the Uganda Police brass band, who invited us to Uganda,’ recalled Mazowe.

The band was in Kenya to participate in the East African Police Band competition. Corp. Oduka happened to attend a show staged by Shelton and his ‘siblings’ at Kaloleni Hall, in the suburbs of Nairobi.

After the show, the policeman, who later became the Uganda Police bandmaster, met the Zimbabwean musicians backstage and asked them if they were coming to Uganda.

Confessed Shelton: ‘We knew nothing about Uganda. As a matter of fact, we were exhausted, after several weeks on tour, travelling by road, water and rail. From Kenya, we intended to return home to Southern Rhodesia.’

Impressed by their performance, Oduka begged the youthful musicians to visit Uganda before returning home, arguing that since the country was part of East Africa, and it would be unfair to leave it out of their tour.

Cpl. Oduka, He Man Who Invited Shelton And His Siblings

The police Band member, who in the evenings moonlighted as a tenor saxophonist in one of Kampala’s popular nightclubs, was convinced the Zimbabweans would cause a stampede on Kampala’s music scene. They were, however, not convinced.

Before returning home from Nairobi, Oduka got the musicians’ address and kept nagging them. Eventually they succumbed.

‘We travelled first class by train from Nairobi to Kampala, and it is one of my most memorable journeys,’ Shelton relived his first journey to Uganda that latter part of 1957.

‘The train was comfortable. The service was first-class: the restaurants served good food, the sleeping cabins were spotlessly clean; everything was of European standard.’

Their host, Oduka, was eagerly waiting at Kampala Railway Station, to take them to his home in Nsambya police barracks, where they had lunch with his family.

As they moved around the country, the youthful musicians couldn’t help observing the big difference between Uganda and all the other countries they had so far been to on their tour.

Everywhere they looked, it was green and beautiful; they could not believe their eyes.

A day after their arrival, their host took them to Uganda Broadcasting Corporation (Radio Uganda) to announce their presence to Uganda’s music lovers.

Their first show was at Top Life Club in Mengo, then the most popular nightclub in the country, owned by a Muyindi (Asian) businessman called Kamuru.

The next one was at King’s College Budo. By then they had recruited a Muganda girl called Beatrice Nalumaga.

‘We wanted her to sing some local songs, and we also taught her our language, Shona,’ Shelton explains

On their way to Budo, where they were supposed to stage a two-hour show, their car broke down and they had to spend an hour fixing it.

Finally they got there and started the show, to the students’ excitement. However after one hour, the headmaster, a Muzungu (white man), stopped the show, saying their time was up.

The students rioted, breaking furniture and windows. As the musicians packed their instruments, the students begged them to return another time.

‘We never went back, we were too scared,’ revealed Shelton.

While waiting for an opportunity to make a grand entrance onto the nightclub scene, the group was kept busy entertaining patients at Mulago and Namirembe hospitals free of charge, and staging concerts at prominent schools like Budo and Gayaza High School.

They didn’t have much in the way of equipment. Their instruments consisted of a ‘dry guitar’ (not amplified) and a microphone. It was their voices and creativity that always carried the day.

The Interior Of Lake Victoria Hotel In The Late 1960s

Shelton and his colleagues were quite impressed by Kampala’s social life, which was very vibrant.

‘The standards very high; it was like Europe. People would wear evening dress, not jeans like today, with matching shoes (black and shiny) when going out for evening dances.’

The ‘happening’ places then included White Nile in Katwe, Top life in Mengo, and a dancing hall in Kitintale owned by Humphrey Luwande, a trade unionist.

Then there was Peacock Bar in Ndeeba, and Planet in Bwaise, a bar owned by Ignatius Sebalamu. Mubiru Kikandwa owned Blue Sky in Nakulabye, which Shelton and his colleagues later took over and then in turn sold it to Daudi Ochieng, the controversial politician.

Then there was Blue Room on Namirembe Road, opposite Aga Khan Hospital, which was notorious for prostitutes. Owned by Indians, it had rooms upstairs, where prostitutes and their customers could enjoy ‘some private moments’.

Located opposite the Equatorial Hotel was Gardenia, owned by an Asian called Gandesha, who also owned Silver Springs Hotel in Bugolobi and Delite Cinema.

There was also Zzana’s bar on Entebbe Road near Namasuba. The owner was reportedly a middle-aged lady with pointed breasts, big hips, a husky voice and a sexy gait.

People came from all over the city to sample her chicken and goat muchomo (roast) and to enjoy her lewd jokes. She was so popular that the bus stop near place was named after her, and the area was known as ‘ewa Zanna’.

Ladies would insist that their dates first take them to Zzana’s place, to enjoy her muchomo, before proceeding to the cinema, bar, nightclub or retiring home.

Zzana eventually got married in church to a Coca-Cola salesman young enough to be her son, but who just couldn’t resist her charm. She was shot dead in her home during the 1979 Amin war.

There were other bars like Bristol Bar in Nateete, Dan’s bar in Bakuli, Paris bar in Wandegeya, Contafric Bar in Kamwokya owned by a Rwandese, and Nangoma, Shelton and co.’s first bar, located in Mengo. For family outings and picnics, Entebbe’s Botanical Gardens was the place to go.

Life was cheap and there was order. Special hire taxis would charge sh3 for a short trip around the city. The drivers were disciplined and time-conscious. Police would book drunken drivers and move with them the whole night as they patrolled the streets, freeing them only after they sobered up. Rescuers would never steal from road accident victims like the case is today.

If a dead body was discovered in an area, the Police would try their best to investigate the cause of death, and if it was murder, the culprit would eventually get arrested.

The Beetle Vw Was A Popular Car

The Government-owned Uganda Transport Company provided public transport using Leyland buses. The drivers, conductor and the ticket inspectors, would all be clad in smart khaki uniforms. The conductor would have a ticket machine hanging on one side, and a money pouch on the other.

There were also double-decker (Kabandole) buses, in the evenings and weekends young lovers would sit in the upper deck and move around the city, just enjoying the ride.

The Second Batch Of Utc New Buses Which Arrived In Kampala. Jan 2, 1974

One day a group of students, after a Saturday night out at Top Life Club Mengo, hijacked a double-decker bus from its driver and conductor, and started driving it around town. When the Police eventually caught up with them, they explained that they were not thieves, but were only having a joy ride. They were left to go.

It was then fashionable for young men to take their girlfriends out to late-night movies and upmarket bars that closed at midnight. From there they would then proceed to a nightclub.

Draper’s was the biggest shop in town. It was located at the exact spot where Crane Chambers stands today. It had different departments for furniture, clothes, cutlery, and there were also catalogues using which one could order from Europe, since the pound was convertible.

Between 1957 and 1958, Shelton and his colleagues opened a ladies hair-straightening salon at Mengo, opposite Bulange. It was the first one in Uganda. A Zambian, Jolly Kipepo, later opened the second one in Wandegeya.

Next to the salon, they opened a restaurant and bar, Nangoma Bar, which quickly caught up with the locals, because of its Afro décor, enhanced by local crafts like the calabash (ekita), gourds (ndeku) and bark cloth (lubugo).

‘We used to cook both English and local dishes. Richard was a very good cook, he had worked in a big hotel back home,’ Shelton recollected their beginning.

The salon had four hair driers, and all the three musicians were involved, using hot combs, which they would heat on paraffin stoves. The hair pomade was imported from South Africa. They would order for it by catalogue, using local currency, which was then at par with currencies of most other countries.

While treating their hair, the musicians would sing for the ladies English and Zulu love songs, which would drive them wild with excitement.

‘It took me time to figure out that the exclamation Aii Onjokezza! (Ouch you have burnt me), was out of pain as a result of a hot comb getting in contact with a scalp, not out of pleasure,’ Shelton said.

Henry’s love relationship with Bishop Nsubuga’s daughter caused a big scandal. How could a mudongo (musician), who survived on patrons’ tips, marry a senior clergyman’s daughter?

But the two were determined and they eventually got married. According to Shelton, it was the wedding of the year. The reception took place at Blue Sky Nightclub.

Dr. Khumalo, a South African lecturer at Makerere University, was the best man, and Mrs. Kironde the matron. The musicians made sure everything was perfect.

At the reception, the musicians first played some of their best songs, and then left Henry to play solo on the drums. Everyone was impressed, including the in-laws.

The marriage, however didn’t last. Ironically, it broke up because Henry became fanatical about religion, abandoning his family to become a full-time preacher of the gospel.

Tomorrow, Shelton talks about how they set up the famous Susana Nightclub Nakulabye, and the time Sir. Edward Mutesa stormed a whites-only club, prompting some white guests to walk out in protest