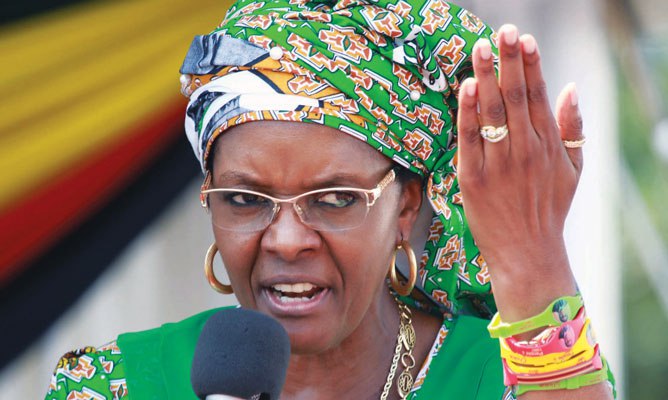 JOHANNESBURG. – South African police said Wednesday that an arrest warrant had been issued for former Zimbabwean First Lady Grace Mugabe, wife of Zimbabwe’s founding president Robert Mugabe, after she allegedly assaulted a model in Johannesburg in 2017.

The 53-year-old reportedly attacked Gabriella Engels using an electrical extension cord at an upmarket hotel in the business district of Sandton where the Mugabes’ two sons were staying.

“I can confirm that a warrant for the arrest of Grace Mugabe was issued last Thursday,” South African Police Service spokesperson Vishnu Naidoo said, adding police were seeking Interpol’s help to enforce it.

“The police investigated and we made an application to the courts and the courts granted a warrant for the arrest,” Naidoo said.

“We are following the Interpol (International Criminal Police) processes, so we are applying for assistance to secure her arrest,” Naidoo added.

Engels, now 21, suffered cuts to her forehead and the back of her head.

At the time, the government granted Mrs Mugabe diplomatic immunity, allowing her to leave South Africa.

A court scrapped the immunity in July, labelling the decision by the foreign ministry as “inconsistent with the constitution”.

Lobby group AfriForum, which has been pursuing the case on Engels’ behalf, welcomed the arrest warrant.

“AfriForum first had to approach the court to have Mugabe’s diplomatic immunity set aside, which paved the way for the police to investigate and it has now reached a point where an arrest can be made,” AfriForum director Kallie Kriel said.

Zimbabwe Suspends Nurse Intake From May 2019