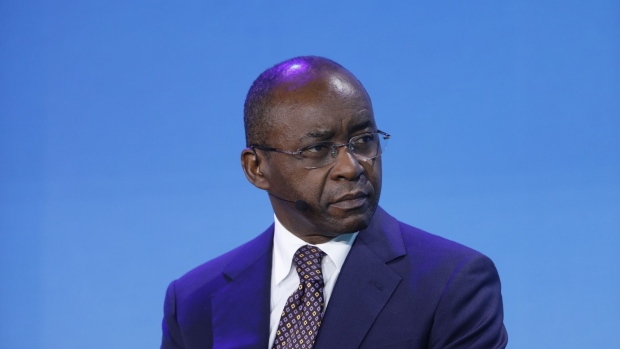 London-based Zimbabwean telecoms tycoon, 60, who fled Zimbabwe and is now trying to provide Africa with Covid vaccines while sitting on Netflix and Unilever boards

A telecoms tycoon whose family fled unrest in Zimbabwe, who took on Robert Mugabe in order to start his businesses, and who is now helping to provide Covid vaccines to Africa, has been named as Britain’s first black billionaire.

London-based Strive Masiyiwa, 60, has clinched the accolade according to the Sunday Times Rich List.

However the Zimbabwe-born businessman, who sits on the boards of Netflix and Unilever, has a more pressing goal in mind – attempting get Covid vaccines to Africa.

Mr Masiyiwa, considered as one of Africa’s most generous humanitarians, is currently the African Union’s special envoy on the pandemic.

And the businessman, a father of six, has recently secured 400 million doses of the Covid vaccine for the continent – home to 1.3billion people.

Strive Masiyiwa (pictured with wife Tsitsi in 2016), who fled unrest in Zimbabwe, took on Robert Mugabe in order to start his businesses, and is now helping to provide Covid vaccines to Africa, has been named the first black billionaire

Mr Masiyiwa (pictured with Tony Blair in 2013) moved to the UK as a child, attended secondary school in Scotland and has an engineering degree from the University of Wales

Mr Masiyiwa owns high profile properties in New York, including two adjacent apartments atop the 29-storey Eldorado Towers (pictured) – which have been at various points home to stars such as Michael J. Fox, Moby and Alec Baldwin

Mr Masiyiwa rise to wealth is a remarkable one, with his parents having fled Rhodesia when he was a child.

The top 10 richest people in Britain, according to the 2021 Sunday Times Rich List

These are Britain’s top 10 richest people, according to the 2021 Sunday Times Rich List:

He was born in the country – now modern day Zimbabwe – in 1961. When he was aged 7 his parents fled the country amid the unrest after Ian Smith’s government declared independence from Britain.

His family moved to Zambia, where Mr Masiyiwa attended primary school, before moving to the UK aged 12.

He attended a private secondary school in Scotland – paid for by his entrepreneur mother – before later earning an engineering degree from the University of Wales.

For a short time he worked in Cambridge in the computer industry, but later returned to Africa.

Upon returning to Zimbabwe in 1984, four years after it had gained independence from Britain, Mr Masiyiwa began working in telecoms. He set up his company Econet in 1993.

In 1998, despite opposition from then Zimbabwean president Robert Mugabe – who died in 2019 – he launched a mobile phone network.

Mugabe refused to give him a license to operate his business. But Mr Masiyiwa took on the controversial leader to the Constitutional Court of Zimbabwe.

After a five year legal battle, which took him to the brink of bankruptcy, he won and was given the green light to set up the network.

Today the company, known as Econet Wireless Zimbabwe, is the second-largest by market capitalisation.

He later told Forbes that the launch of the network took place ‘at a time when 70 per cent of the country inhabitants had never heard a ringtone’.

Mr Masiyiwa (pictured with Barack Obama in 2016) was born in the Rhodesia – now modern day Zimbabwe – in 1961. When he was seven his parents fled the country amid the unrest the country’s declaration of independence from Britain

After fleeing persecution from the local authorities, Masiyiwa left Zimbabwe, initially to South Africa – where he launched a new Econet Wireless group.

After living in South Africa for several years, Mr Masiyiwa moved to London in 2010 and has lived in the capital ever since.

He still maintains a significant business interest in South Africa.

While in the UK, Mr Masiyiwa lives in a detached £2.5million mansion on an exclusive private estate in Weybridge, Surrey.

He also owns high profile properties in New York, including two adjacent apartments atop the 29-storey Eldorado Towers – which have been at various points home to stars such as Michael J. Fox, Moby and Alec Baldwin.

He bought the two properties for $24.5million in 2016. According to 2019 reports, he also owns a £24million mansion, with 24 rooms – including nine bathrooms with ensuite bathrooms.

Mr Masiyiwa shared a picture of himself with an American bishop, author and filmmaker T.D Jakes in Ghana in 2018

Mr Masiyiwa is a member of the Netflix board. Here he is in a picture her shared on Instagram with the company’s co-founder Reed Harrison in 2019

Mr Masiyiwa is also known as one of the most prolific African philanthropists, focusing in particular on young people.

He founded the Higherlife Foundation together with his wife Tsitsi, which pays school fees for some 40,000 students in Zimbabwe, South Africa, Burundi and Lesotho who are either orphaned or from low-income families.

He has provided scholarships to more than 250,000 young Africans over the past 20 years through his family foundation.

The couple also established the Ambassador Andrew Young Scholarship, which enables African students to attend the Morehouse College in Atlanta, Georgia, US.

In 2012, President Barack Obama invited Masiyiwa and four other business leaders to attend the 38th G8 summit at Camp David to address them on strategies on how to increase food production and end poverty in parts of Africa.

And in 2014, Fortune Magazine named Masiyiwa as one of the 50 most influential business leaders in the world.

He made the Forbes billionaire sheet in 2018, with his total worth then estimated to be around $2.3billion.

This month is the time he has been listed on the Sunday Times Rich List as a billionaire.