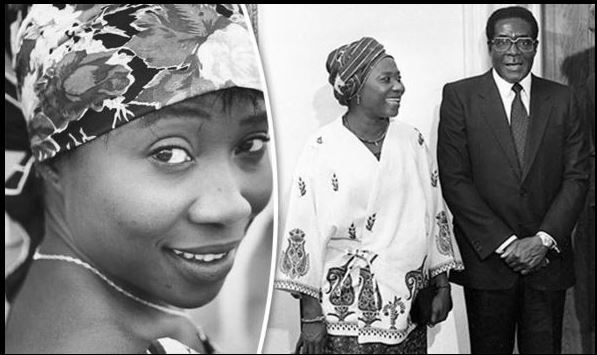 Born in 1931 in the Gold Coast (present-day Ghana), then a British colony, Sally and her twin sister, Esther, were raised in a political family, which was part of the growing nationalist politics in the colonial Gold Coast. She went to Achimota Secondary School, then went on to university to study before qualifying as a teacher.

She met her future husband, Robert Mugabe, in the Gold Coast at Takoradi Teacher Training College where they were both teaching, and went with him to Southern Rhodesia, where they were married in April 1961 in Salisbury.

A trained teacher who asserted her position as an independent political activist and campaigner, Hayfron demonstrated this activism as early as 1962 when she was active in mobilising African women to challenge the Southern Rhodesian constitution. She was charged with sedition and sentenced to five years imprisonment. Part of the sentence was suspended.

In 1967, Sally went into exile in London, and resided in Ealing Broadway, West London; her stay in Britain was financed, at least in part, by the British Ariel Foundation. This was a charity founded in 1960. It had close links to the British government which saw higher education in Britain as a means of influencing the next generation of African leaders. She spent the next eight years agitating and campaigning for the release of political detainees in Rhodesia, including her husband who had been arrested in 1964 and was to remain incarcerated for ten years. Their only son, Nhamodzenyika, who was born in 1963 during this period of detention and imprisonment, would succumb to a severe attack of malaria and died in Ghana in 1966. Mugabe was prevented from attending the burial of his son. Her father died in 1970.

The British Home Office attempted to deport her in 1970, but after her husband, still in prison, petitioned the British Prime Minister, Harold Wilson, and the Foreign and Commonwealth Office, she was given British residency. Her case for residency was supported by two British Government ministers in particular: Labour MP Maurice Foley, and the Conservative peer Lord Lothian.

With Robert Mugabe’s release in 1975 and subsequent departure for Mozambique with Edgar Tekere, Sally rejoined her husband in Maputo. Here, she cast herself in the new role of a mother figure to the thousands of refugees created by the Rhodesian Bush War. This earned her the popular title Amai (Mother).

She also founded the Zimbabwe Child Survival Movement. Sally Mugabe launched the Zimbabwe Women’s Cooperative in the UK in 1986 and supported Akina Mama wa Afrika, a London-based African women’s organisation focusing on development and women’s issues in Africa and the United Kingdom.

Hayfron died on 27 January 1992 from kidney failure. Upon her death she was interred at the National Heroes Acre in Harare, Zimbabwe. In 2002, to mark the 10th anniversary of her death, Zimbabwe issued a set of five postage stamps, of a common design, using two different photographs, each photograph appearing on two of the denominations. She is remembered fondly with love and affection, as she is still considered the founding mother of the nation of Zimbabwe.

Who is Mugabe’s wife Sally Hayfron?

Born in 1931 in present day Ghana, Sally met Mugabe at a teacher training college and soon asserted herself as a fervent political campaigner.

The pair got married in 1961 and two years later Sally gave birth to a son, Nhamodzenyika, who died of malaria when he was three years old.

Following the death of Nhamo and the imprisonment of her husband, Sally sought exile in the UK, where she worked for the Africa Centre until her visa expired in 1970.

Robert Mugabe was having an affair with Grace while Sally was dying of kidney disease
The British Home Office had intended to deport Sally, but multiple letters from Mugabe and a petition signed by at least 400 MPs eventually persuaded the authorities to allow her to stay.

At the time of Zimbabwe’s independence in 1980, Mugabe was seen as an anti-colonial hero.

However, he is now widely regarded as a violent despot, who has ruined one of southern Africa’s most promising nations.

Sally went on to become the First Lady of Zimbabwe in 1987 and was elected Secretary General of the Zanu-PF Women’s League in 1989.

After dying of kidney disease in 1992, she was buried at the National Heroes Acre in Harare.

Then, to mark the 10th anniversary of Sally’s death, Zimbabwe issued a limited edition set of postage stamps featuring two photographs of her.

Sally Hayfron is well loved in Zimbabwe unlike Grace Mugabe
Sally’s marriage to Mugabe began to falter when they found out they could not have any more children.

Mugabe has always insisted that Sally was aware of his relationship with Grace. At a business conference in 2014, the despot tried to justify the affair.

He said: “Even as Sally was going through her last days, although it might have appeared to some as cruel, I said to myself ‘well it’s not just myself needing children, my mother has all the time said I am going to die without seeing grandchildren’.” -WIKI/EXPRESSUK