There is a scene in the 1978 classic movie, The Great Train Robbery, which portrays the destructive arrogance of Zimbabwe’s monetary policy over the past two decades.
After masterminding a gold heist, Edward Pierce, played by Sean Connery, is dragged before a stern judge. 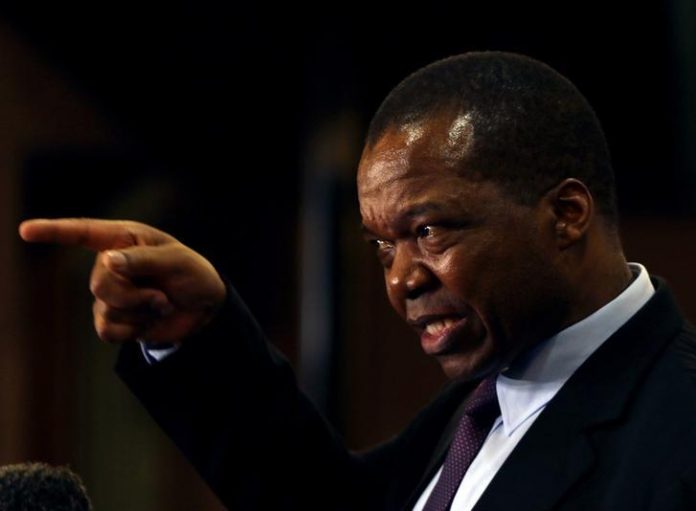 “Now, on the matter of motive, we ask you: Why did you conceive, plan and execute this dastardly and scandalous crime?” the judge asks.

With zero guilt, to laughter in the gallery, Pierce responds: “I wanted the money.”

In Zimbabwe, once again, Zimbabweans have been robbed, punished for no other reason than the fact that Government simply wanted the money, just so it could spend it loosely.

On Monday, Reserve Bank of Zimbabwe (RBZ) governor John Mangudya directed banks to open Foreign Currency Accounts, which would be separate from the standard local deposit RTGS accounts. Cutting through all the jargon, what this means is that your bank balance is no longer in US dollars. Not that Zimbabweans did not already know this – their bank balances have been eroded for months – but confirmation of the fact by RBZ has left many with that empty, violated feeling one gets after being pick pocketed.

The bank accounts into which some once deposited real US dollars, are now denominated in a currency that is not really US dollars. Just two years ago, when Mangudya introduced bond notes, he fed a sceptical public the line that the bond note was at par with the US dollar, on the basis of a claimed Afreximbank guarantee whose details were never made public.

Now, in effect, RBZ has somehow managed the incredible feat of turning US dollars into a nameless currency, whose value nobody knows. Central bank calls it “ring-fencing”, but there’s only one word for it – a heist.

For the second time in a decade, Zimbabweans’ savings have been destroyed.

This time, the method of theft has been Government borrowing. Domestic debt rose from US$275.8 million in 2012 to current levels of US$9.5 billion. This is what has destroyed the value of people’s money.

Yet, nobody in Government can point to anything of real use that this pile of money has been used on, beyond the black hole that is recurrent expenditure. Why did you borrow, one would ask the Government? Why did you conceive, plan and execute this dastardly and scandalous crime? “I just wanted the money,” the Government would respond.

The robbery has been massive, from the decimation of life savings to the destruction of pensions. Now they must wonder what value they actually have in their accounts, and they even have to pay more in electronic transaction charges to use that money. Once again, Zimbabweans are being punished for Government’s failures.

In 2015, the Zimdollar was “demonetised”, or taken out of circulation. To make this possible, all the Zimbabwe dollar deposits that existed at the time Zimbabwe moved to the US dollar in 2009 had to be converted to US dollars. What did depositors get for their life savings? Just US$5 each.

“All genuine or normal bank accounts, other than loan accounts, as at 31 December 2008 would be paid an equal flat amount of US$5 per account,” Mangudya said in 2015.
This, he said then, would “bring to finality this long outstanding government obligation to the banking public and to formally pronounce the demise of the local currency”. Now, but by another name, it has happened again. And, worse still, that “demise of the local currency” does not seem to have ever happened at all.

That conversion robbed Zimbabweans of their pensions. A Commission of Inquiry into the Conversion of Insurance and Pension Values from the Zimbabwe dollar to the United States dollar released a report this year that said pensions virtually disappeared after the 2015 conversion, which was done at an exchange rate of US$1 to ZW$35 quadrillion.

There had been more brazen robberies earlier, whose effects will now be felt as banks set up the new FCAs.

Back in 2003, the RBZ, was under the eccentric Gideon Gono. Under his hyper-inflationary reign, Zimbabweans were robbed of value countless times as he repeatedly introduced one new denomination after the other, lopping zeroes off the currency, sometimes overnight. Then, just as now, it was all down to spending. For Gono, this included “quasi-fiscal activities”, a broad subsidy program that included printing money to buy anything from scotch carts to groceries. Gono’s power rose, but the power of the Zimdollar fell.

Then Gono began robbing citizens’ bank accounts. FCA holders were suddenly told by their banks that they were now required to sell 50 percent of their forex earnings to the Government, at a frozen exchange rate.

The raids did not end there. In 2007, under threat of expulsion from the IMF and facing a shortage of critical imports, Gono raided the banks and ran off with about $400 million in foreign currency from FCAs held by private citizens, NGOs and even charities.

Confronted, Gono denied everything: “For anyone to suggest that we either raided exporters’ FCAs or raided any other depositors’ facilities…is scandalous, to say the least”.

But the truth always comes out. A Chinese trading company, Shougang International, sued its bank, Standard Chartered, after the company’s FCA was cleaned out. The bank put the blame on RBZ, saying Shougang needed to claim its money from central bank, which was the one that had raided the account. High Court judge Francis Bere ruled that Standard Chartered was indeed responsible for reimbursing its client. Years later, the raids were confirmed by Patrick Chinamasa, who as Finance Minister finally admitted to the heist.

So, will depositors now trust banks, and indeed central bank, not to loot these new FCAs as they did back then?

It could have been different, had the Government been wiser with money and spent less. But they wanted the money. As Finance Minister Mthuli Ncube admits, the Government has been spending too much.

The overdraft with the Central bank stands at $2.3 billion, as at end of August 2018, well above the statutory limit of $762.8 million. To stop this, Ncube will now limit the overdraft to the 20 percent of the previous year’s revenues, as is required by law. Ncube also says he will from now on curb the issuance of Treasury Bills, a big part of the currency crisis.

While TBs are used in some markets to fund infrastructure, the Government of Zimbabwe has used it to feed its spending habits. It just wants the money.

Ncube’s latest moves may make sense. But the sense of loss among Zimbabweans cannot be healed by token steps not backed by real action. Public trust in the RBZ, and in Government institutions as a whole, has totally collapsed.

Ncube, Mangudya and Mnangagwa himself often talk about their concern for the budget and trade deficits. But by far the biggest deficit they need to sort out is the trust deficit. No tweaking of policy, or bailout, can fix that as long as the RBZ and the Government are not doing the right things.

Only when the public sees that RBZ is solving their problems, and not actually causing them, can that trust be restored. Speeches and wafer-thin “policy interventions” won’t cut it anymore.

For now, people believe the bank is robbing them blind, as it has done for years, simply because, like the great train robber Pierce, it simply wanted the money. Just to spend as it wishes, with no explanation.

At the end of the Great Train Robbery movie, Edward Pierce escapes from custody and gets away with the robbery. Just like our Government today.