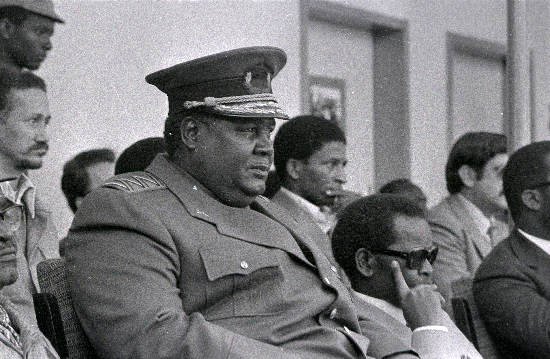 Joshua Mqabuko Nyongolo Nkomo (19 June 1917–1 July 1999) was the leader and founder of the Zimbabwe African People’s Union (ZAPU) and a member of the Kalanga tribe.

He was a trade-union leader, who became president of the banned National Democratic Party, and was jailed for ten years by Rhodesia’s white minority government. After his release, ZAPU contributed to the fall of that government, but then feuded with the rival ZANU group led by Robert Mugabe.

Fearing for his life, Nkomo fled the country, before controversially allowing ZAPU to merge with ZANU. Nkomo had many nicknames, including “Father Zimbabwe” and “Chibwechitedza” (the slippery rock).

Nkomo was born in Bukalanga or Bulilima, now referred to as Semokwe Reserve, Matabeleland South and was one of eight children. His father (Thomas Nyongolo Letswansto Nkomo) worked as a preacher and a cattle rancher and worked for the London Missionary Society.

After completing his primary education in Southern Rhodesia, Nkomo took a carpentry course at the Tsholotsho Government Industrial School and studied there for a year before becoming a driver. He later tried animal husbandry, then became a schoolteacher specialising in carpentry at Manyame School in Kezi.

In 1942, at the age of 25, during his career as a teacher, he decided that he should go to South Africa to further his education, do carpentry and qualify to a higher level. He attended Adams College and the Jan H. Hofmeyr School of Social Work in South Africa.

There he met Nelson Mandela and other regional nationalist leaders at the University of Fort Hare, though he did not attend that university. It was at the Jan Hofmeyr School of Social Work that he was awarded a B.A. Degree in Social Science in 1952. Nkomo married his wife Johanna MaFuyana on 1 October 1949.

After returning to Bulawayo in 1947, he became a trade unionist for black railway workers and rose to the leadership of the Railway Workers Union and then to leadership of the African National Congress in 1952.

In 1960 he became president of the National Democratic Party, which was later banned by the Rhodesian government. He also became one of Rhodesia’s wealthiest self-made entrepreneurs.

Nkomo was detained at Gonakudzingwa Restriction Camp by Ian Smith’s government in 1964, with fellow rebels Ndabaningi Sithole, Edgar Tekere, Maurice Nyagumbo and Robert Mugabe, until 1974, when they were released due to pressure from South African prime minister B.J. Vorster.

Following Nkomo’s release, he went to Zambia to continue opposing the Rhodesian government through the dual processes of armed resistance and negotiation.

At the time of independence ZIPRA had a modern military, stationed in Zambia and Angola, consisting of Soviet-made Mikoyan fighters, tanks and armoured personnel carriers, as well as well trained artillery units.

Joshua Nkomo was the target of two attempted assassinations. The first one, in Zambia, by the Selous Scouts, a pseudo-team. But the mission was finally aborted and attempted again, unsuccessfully, by the Rhodesian Special Air Service (SAS).

In August 2011 it was reported by the BBC that Nkomo had been tipped off by the British government.

ZAPU forces strategically weakened the Rhodesian government during the bush war. The most widely reported and possibly the most effective of these attacks which had an impact in the Rhodesian’s social life was the downing of two Air Rhodesia Vickers Viscount civilian passenger planes with surface-to-air missiles.

The first, on 3 September 1978, killed 38 out of 56 in the crash, with a further ten survivors (including children) shot dead by ZIPRA cadres, sent to inspect the burnt wreckage.

Nkomo later dismissed the massacre as false allegations perpetrated by the Rhodesian media and expressed his regret at the downing of a civilian plane, but defended the act by citing that the Rhodesian government was known to transport military personnel aboard civilian liners.

The eight remaining survivors are said to have managed to elude the guerrillas and walked 20 km into Kariba from where the flight had taken off (it was heading for Salisbury, Rhodesia’s capital, now renamed Harare).

Some of the passengers had serious injuries and they were picked up by local police and debriefed by the Rhodesian army. The second shooting down, on 12 February 1979, killed all 59 on board.

The real target of the second attack was General Peter Walls, head of the COMOPS (Commander, Combined Operations), in charge of the Special Forces, including the SAS and the Selous Scouts. Due to the large number of tourists returning to Salisbury a second flight had been dispatched.

General Walls received a boarding card for the second flight, which departed Kariba 15 minutes after the doomed aircraft. No one has been brought to trial or charged with shooting down the aircraft due to amnesty laws passed by both Smith and Mugabe.

In a television interview not long after the attack on the first aircraft, Nkomo joked about the incident while admitting ZAPU had indeed been responsible.

In his memoirs, Story of My Life, published in 1985, Nkomo later said, “during that interview, the interviewee had asked about what we used to down the planes and i said stones jokingly in an attempt to avoid answering the question due to military intelligence which demanded secrecy regarding what type of weapons we had acquired from the Soviet Union. They remembered the laugh and not the regret for the shooting down of both aircrafts.

Nkomo founded the National Democratic Party (NDP) and in 1960, the year British prime minister Harold Macmillan spoke of the “Wind of Change” blowing through Africa, Robert Mugabe joined him.

The NDP was banned by the white minority government and it was subsequently replaced by the Zimbabwe African Peoples Union (ZAPU), also founded by Nkomo, in 1962, itself immediately banned.

ZAPU split in 1963 and while some have claimed this split was due to ethnic tensions, more accurately the split was motivated by the failure of Sithole, Mugabe, Takawira and Malianga to wrest control of ZAPU from Nkomo. ZAPU would remain a multi-ethnic party right up until independence.

Following the first majority-rule election in Zimbabwe-Rhodesia in which around 60% of the population voted, a government led by Abel Muzorewa, was formed in 1979 between Ian Smith and Ndabaningi Sithole’s ZANU, which by now had also split from Mugabe’s more militant ZANU faction.

The civil war waged by Nkomo and Mugabe continued unabated and Britain and the USA did not lift sanctions on the country. Britain persuaded all parties to come to Lancaster House in September 1979 to work out a constitution and the basis for fresh elections.

Mugabe and Nkomo shared a delegation, called the Patriotic Front (PF), at the negotiations chaired by Lord Carrington.

Elections were held in 1980 and to the surprise of Nkomo but few others, the Common Roll vote split on predictable tribal lines, with the 20 seats in Matabeleland going to ZAPU and all but three of the sixty in predominantly Shona areas falling to Mugabe’s ZANU.

Nkomo was offered the ceremonial post of President, but declined.

Despite reaching their ultimate goal, ousting Smith’s minority regime, Nkomo would not reconcile his differences with Mugabe.

While ideological differences kept the two men far enough already, Nkomo’s ethnic background was grounds for distrust by Mugabe who constantly feared an uprising by the historically turbulent Ndebele population.

Nkomo would make concessions and attempts to improve relationships but met with varying results, the most successful being the ones where Sally Hayfron would intervene, as she was the only person within Mugabe’s Party who was supportive of Nkomo.

Allegedly, when Mugabe was offered a seat by Julius Nyerere in his office where he met Nkomo months before, he refused and instead told him “If you think I’m going to sit right where that fat bastard just sat, you’ll have to think again”.

Initially, Mugabe refused to give Nkomo the position of Minister of Defense which Nkomo had been hoping for.

After the intervention of Sally Hayfron, Nkomo was appointed to the cabinet (as minister without portfolio), but in 1982 was accused of plotting a coup d’état after South African double agents in Zimbabwe’s Central Intelligence Organization, attempting to cause distrust between ZAPU and ZANU, planted arms on ZAPU owned farms and then tipped Mugabe off to their existence.

In a public statement Mugabe said, “ZAPU and its leader, Dr. Joshua Nkomo, are like a cobra in a house. The only way to deal effectively with a snake is to strike and destroy its head.”

He unleashed the Fifth Brigade upon Nkomo’s Matabeleland homeland in Operation Gukurahundi, killing up to 20000 Ndebele civilians in an attempt to destroy ZAPU and create a one-party state. Nkomo fled the country. Mugabe’s government claimed that he had “illegally” left dressed as a woman:

“ NKOMO FLEES: ZAPU leader, Joshua Nkomo, fled in self-imposed exile to London after illegally crossing the Botswana frontier disguised as a woman on 7 March. 1983, claiming that his life was in danger and that he was going to look for “solutions” to Zimbabwean problems abroad.” (Government Printer, Harare 1984).”

Nkomo ridiculed the suggestion that he escaped dressed as a woman. “I expected they would invent stupid stories about my flight…. People will believe anything if they believe that”. He added that “…nothing in my life had prepared me for persecution at the hands of a government led by black Africans.”

After the Gukurahundi massacres, in 1987 Nkomo consented to the absorption of ZAPU into ZANU, resulting in a unified party called ZANU-PF, leaving Zimbabwe as effectively a one-party state and leading some Ndebeles to accuse Nkomo of selling out.

These Ndebele individuals were in such a minority that they did not constitute a meaningful power base within the cross-section of ZAPU. In a powerless post and with his health failing, his influence declined.

When asked late in his life why he allowed this to happen, he told historian Eliakim Sibanda that he did it to stop the murder of the Ndebele (who supported his party) and of the ZAPU politicians and organizers who had been targeted by Zimbabwe’s security forces since 1982.

“Mugabe and his Shona henchmen have always sought the extermination of the Ndebele,” he said.

Nkomo had been an inactive member of the Missionary Church for most of his life. He died of prostate cancer on 1 July 1999 at the age of 82 in Parirenyatwa Hospital in Harare.

Letters allegedly written by Nkomo to the prime minister Robert Mugabe while in exile in the United Kingdom began to resurface following his death in 1999. In the letters he argues against his persecution and accused the government of cracking down on opposition.

On 27 June 2000, a set of four postage stamps were issued by the Post and Telecommunications Corporation of Zimbabwe featuring Joshua Nkomo. They had denominations of ZW$2.00, $9.10, $12.00 and $16.00 and were designed by Cedric D. Herbert. Wikipedia