Home Crime & Courts Thief soils self after getting stuck in chimney for TWO DAYS while... 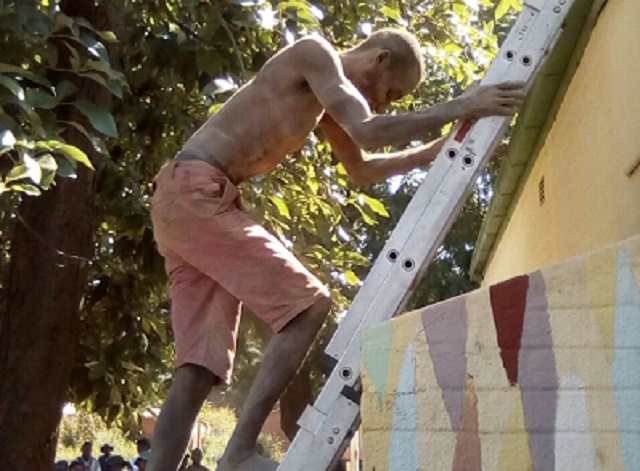 A SUSPECTED thief became a prisoner of his own scheme after he got stuck for two days in a chimney.

Andrea Zunga (33) of Makokoba suburb was part of a gang of three that hatched a plan to enter Thabiso Youth Centre in the same surbub through the building’s two chimneys on Monday night.

Zunga’s accomplices who are still at large, managed to get in and out through one of the chimneys and got way with two computers, a laptop and a jacket but he got stuck in the other chimney which is blocked at the bottom.

The accomplices on realising that Zunga was stuck in the chimney fled with their loot and did not tell anyone about the mishap.

Zunga looked like the popular South African soapie Isibaya zombie, Umgijimi, when a fire brigade crew smashed the chimney to rescue him yesterday.

The accomplices on realising that Zunga was stuck in the chimney fled with their loot and did not tell anyone about the mishap.

He appeared to have relieved himself while strait-jacketed in the smoke vent as a pungent stench of human excrement kept rescuers at bay.

Police were there on time to save him from an angry mob before whisking him away.

Family members yesterday told The Chronicle that Zunga was on important medication after having come from South Africa on a stretcher.

“We’re worried he might relapse after defaulting for three days,” said his brother Trevor.

He said the family had reported him missing.

Zunga had apparently shouted himself hoarse trying to attract residents’ attention, to no avail.

For two days he screamed, shouted and cried but no one heard him.

A cleaner at Thabiso Youth Centre yesterday got the shock of his life when he heard a voice from the roof.

First on the scene were the police.

The Chronicle observed officers dropping a rope down the chimney but Zunga was too weak to grasp it.

They called the fire brigade and the firemen destroyed the structure.

Zunga then hobbled down a ladder without help, reeking of excrement with a cloud of flies buzzing around him. Two police officers were waiting to cuff him at the bottom and they saved him from the crowd that wanted to beat him up.

Police were there on time to save him from an angry mob before whisking him away.

Chairperson for the Parental Advisory Committee at Thabiso Youth Centre Mr Promise Nqwababa said the youth centre was broken into on Monday night and the crime was discovered on Tuesday morning.

“We only discovered that someone was stuck in the chimney this morning as we heard faint cries of someone calling for help. It seems that yesterday he was quiet as he was still trying to get himself out of the situation,” said Mr Nqwababa.

He said Zunga is a popular face at the youth centre as he frequents the place that is a stone’s throw from his family’s home.

Chief Fire Officer, Mr Richard Peterson, said the firebrigade was called to the scene at 9.31AM.

“We were called to rescue a 33- year old man who was stuck in a chimney at Thabiso Youth Centre in Makokoba at  9.31 AM. He must have been trying to steal,” he said.

The Fire Brigade came to Zunga’s rescue at 9:31am

Mr Peterson urged residents not to engage in such daring acts which put their lives at risk.

“The economy is tough, but people should not steal, as they will only land themselves in such embarrassing situations. This man was just lucky to survive for two days stuck in there. It should be a lesson to others,” he added.

“This is a good lesson to the public as people ought to know that crime does not pay,” she said.-zimpapers