Thomas Bata, ‘Shoemaker to the World,’ 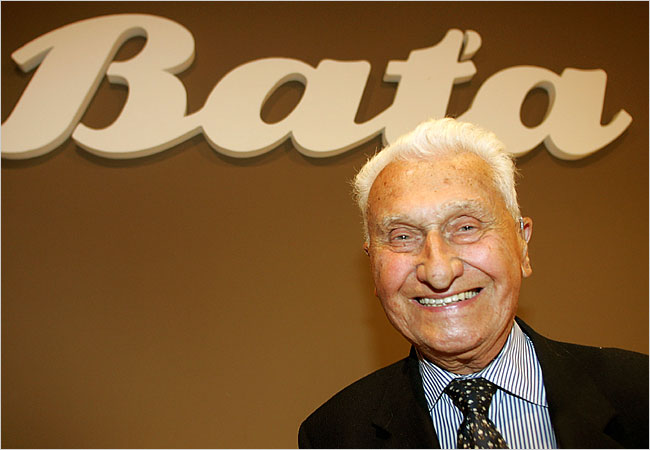 The popular myth that BATA shoe company is a Zimbabwean brand is untrue. The brand was brought by Thomas J.Bata.

Thomas J. Bata, who moved his family business to Canada ahead of the German invasion of Czechoslovakia and later became, as he put it, “shoemaker to the world,” died in Toronto in 2008. He was 93.

Mr. Bata died in a hospital, Leslie Tenenbaum, the general counsel for Bata, said. The family is not disclosing the cause of death, he said.

Mr. Bata’s footwear is not well known among fanciers of designer shoes from Manolo Blahnik or fans of the latest sneakers from Nike. But Mr. Bata made the company, which was founded by his father, so pervasive in the developing world that, according to Mr. Tenenbaum, Bata became a generic noun for shoe in some parts of it, particularly in Africa. It is, Mr. Tenenbaum added, a situation that somewhat dismays him in his role as the protector of the company’s trademarks.

Mr. Bata, who was born in Prague on Sept. 17, 1914, gradually assumed control of the family business after his father’s death in an airplane crash in 1932. Bata was already a substantial operation at that time. Based in Zlin, Czechoslovakia, the company was then making about 36 million pairs of shoes a year and exporting to the United States and Asia while also operating retail shops in several European countries.

With Europe apparently heading toward war in 1938, it was decided that Mr. Bata should establish a North American operation. In his autobiography “Bata, Shoemaker to the World,” written with Sonja Sinclair, Mr. Bata recalled that Canada was picked, at least in part, because of the “romantic tales about the Wild West and about northern explorers” his mother had read to him as a child. To Mr. Bata’s dismay, when he arrived in Canada in 1939 he found its countryside and cities to be rundown and dirty compared with Europe.

With Czechoslovakia’s future looking uncertain, the company decided that rather than establish a branch plant in Canada, it would make the new operation an alternative headquarters to Zlin. The plan did not meet an entirely warm reception in Canada, where unemployment was high and many domestic shoemakers were fighting for survival. Mr. Bata had to settle for importing 100 workers and managers from Zlin after the government turned down his request for 250.

To house the workers and the new plant, Mr. Bata established a company town southwest of Ottawa complete with a corporate ski hill. Called Batawa (an amalgam of Bata and Ottawa), it became the first of a series of Bata company towns around the world.

Mr. Bata fought in the Canadian Army during World War II. The war’s aftermath was devastating for the company. Many of its facilities had been destroyed, and many of those that survived, including Zlin, had been nationalized. A complex holding company structure, however, meant that the Bata family still controlled substantial assets.

While the company invested in developing the Canadian business as well as in rebuilding traditional markets in Western Europe, its greatest success came in regions where factory-made shoes had made few inroads.

That expansion sometimes brought Mr. Bata into negotiations with infamous political leaders, like Idi Amin in Uganda, and the policies of some countries created public relations and diplomatic headaches for Bata and the government of Canada. Under pressure from the Canadian government, Bata sold its South African operation because of apartheid. While he was opposed to the system, Mr. Bata said in his autobiography, he would have preferred to stay and continue providing employment, health care and educational services.

Mr. Bata also made it clear that the company’s move into less-developed markets was primarily motivated by business concerns.

“We expanded into Africa in order to sell shoes, not to spread sweetness and light,” he said.

His company now employs an estimated 40,000 workers in factories in 25 countries and sells about 300 million pairs of shoes a year.

Mr. Bata’s son, Thomas George Bata, became chairman and chief executive of the company in 2001, but the elder Mr. Bata remained active in its operations and carried business cards listing his title as “chief shoe salesman.” At his death, Mr. Bata was planning a tour of the company’s European operations.

In addition to his son, Mr. Bata is survived by his wife, Sonja, and three daughters, Christine Bata Schmidt, Monica Pignal and Rosemarie Bata.

In Canada, his public profile was somewhat overshadowed by that of his wife, who was the daughter of the Bata family’s corporate lawyer in prewar Europe. She is the founding chairwoman of the Bata Shoe Museum in Toronto.

The company is still family owned, but little of it remains in Canada. Its headquarters are now in Lausanne, Switzerland; the company’s Canadian retail chains have been sold or closed; and production stopped in Batawa about eight years ago. Mrs. Bata has bought the community from Bata and started a separate venture to redevelop it as a residential community. She recently donated about $1 million for a ski lift.

After the Velvet Revolution, Mr. Bata returned to Czechoslovakia in 1989 at the invitation of President Vaclav Havel. He was greeted by crowds at the airport of his birthplace and later re-established operations in the country that had once nationalized his company. Since then, Mr. Bata made several return trips and established a charitable foundation there.Correction: October 1, 2008

Because of an editing error, an obituary on Sept. 3 about the shoe manufacturer Thomas J. Bata misidentified the name of his homeland upon his return to Prague in 1989. It was Czechoslovakia — not the Czech Republic, which was not established until 1993.-Nytimes