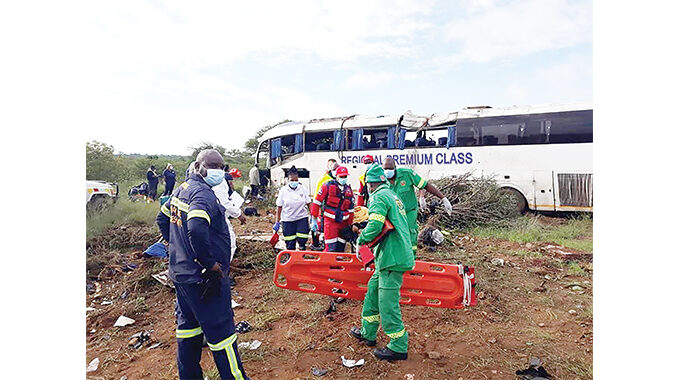 HARARE – Three people believed to be Zimbabweans were killed when a bus they were travelling in was involved in an accident a few kilometres before Polokwane on Monday evening.

It is understood that 40 other passengers were injured in the accident that occurred near Botlokwa area in Limpopo province.

The bus was travelling from Zimbabwe when the accident occurred in the neighbouring country.

In a statement yesterday, Limpopo’s Department of Traffic and Community Safety said the matter was under investigation.

“It is alleged that the driver of the speeding Scania bus lost control of the vehicle, hit an electric pole and overturned,” read part of the statement.

“Three people were certified dead on the scene and over 40 passengers were rushed to Botlokwa and Polokwane. Reckless and negligent driving is cited as a possible cause of the accident”.

Limpopo Transport and Community Safety MEC, Mavhungu Lerule-Ramakhanya yesterday sent messages of condolences to the families that lost their loved ones in the crash.

She also cautioned public transport operators to obey the speed limits since they are vested with the responsibility to transport thousands of commuters on a daily basis.

In July last year, four Zimbabweans and one South African were killed while nine others were injured when a kombi fleeing a police roadblock collided head-on with a bus south of Musina near the Zimbabwe border.

At that time, Limpopo’s Department of Transport and Community Safety said the minibus driver and three passengers were certified dead on the scene.

The taxi driver allegedly refused to stop at a security checkpoint resulting in a high-speed chase with the police. The accident happened during the chase.

As a result of the accident, the road was temporarily closed for over three hours to allow emergency personnel to clear the wreckage.

Over 50 Zimbabweans have been killed in road traffic accidents along the N1 Highway in the last 12 months.