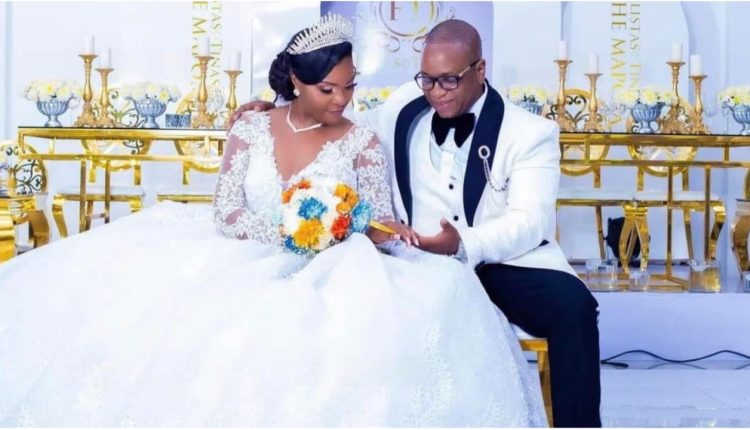 Tinashe Maphosa Stole Money From My House And Sneaked Back To America In My Absence: Mai Titi

Controversial socialite Mai Titi is accusing her estranged husband, Tinashe Maphosa of stealing money from her house before sneaking back to his US base.

Mai Titi says she had been keeping money for stokvel, which Maphosa helped himself with when she was in Victoria Falls. Soon after stealing, she alleges that he then disappeared to America on the pretext that he was urgently needed for work duty.

In the video making rounds on social media, Mai Titi is seen hurling insults at Maphosa whom she also accused of bedding her close friend.

Mai Titi and Maphosa had a flamboyant wedding where they splashed up to US$100 000 back in April.

However, it later turned out that she did not fork the whole amount from her own pocket. According to the comedienne, she borrowed some of the money in anticipation that her husband would reimburse as agreed.

Unfortunately, after the wedding, Maphosa did not honour his word, which led to Mai Titi’s public meltdown.

The public spat soon degenerated and the two had to call it quits just four months into their union.

In a move to signify a new chapter, Mai Titi last week burnt her expensive wedding gown which she initially said was worth US$4 000 before changing goalposts to a whopping US$6 000.

Many found her actions insensible considering the fact that there was once a Go Fund Me campaign to help pull her out of debt.

Not too long after burning the dress, Mai Titi then revealed that people she owes money were on her case after they spotted her looking glamorous at the recently held Miss Zimbabwe Beauty Contest 2022.

“My Satday outfit got me in trouble with someone I’m owing hanzi zvinhu zvako zvikufamba not knowing kuti zvinhu zvakamira but that won’t stop me from looking good. Us we got designers who will design clothes for us even for free mufunge kutokusonera even on 0 payment because we have built that relationship navo. So ndogona kupfeka  the most expensive outfit yandatopiwa iwe wotokwira hako bp ayiwa Tapiwa I just told myself that I refuse to look like my problems chete. But maproblems acho atoritiii