Tommy Sithole : Why Zimbabwe fired boss of its newspaper group in 2001 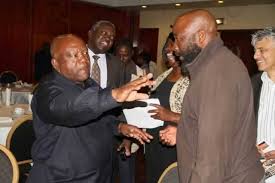 The Zimbabwe government sacked the chairperson of six major state-owned newspapers because he refused to fire editors and appoint new ones who would toe the government line.

Tommy Sithole, chairperson of the board of Zimbabwe Newspapers (Zimpapers), was removed from his position after he refused to implement a

directive from Information Minister Jonathan Moyo to remove editors of three of the six Zimpapers titles and reshuffle others in a bid to improve the government’s battered image.

Sithole, who was appointed last September 2000 said : “I am no longer at Zimpapers”, but refused to be interviewed further.

It emerged that Moyo’s directive to remove and reshuffle editors was communicated to Sithole’s board by Honour Mkushi, chairperson of the Zimbabwe Mass Media Trust (ZMMT) on February 14. The ZMMT is the arm through which President Robert Mugabe’s government controls its majority stake in Zimpapers.

Authoritative sources said Sithole and a few other board members resisted Moyo’s directive to remove the editors of the Herald, the Sunday Mail and the Chronicle.

They said it was not appropriate to implement another reshuffle barely eight months after three other editors were sacked from the country’s largest publishing group.

because they had not done enough to help project the government in good light since their appointments, according to authoritative sources.

The minister also wanted to have Steve Mpofu, editor of the Chronicle newspaper, based in Bulawayo, replaced, but Sithole refused.

Zimbabwe’s only independent daily newspaper, the Daily News in 1998.

Authoritative sources dismissed statements on Wedensday by Mkushi and Moyo that Sithole had been asked to resign because of the pressure of his work with the International Olympic Committee (IOC).

They said this was a smokescreen to hoodwink the public into believing that Sithole’s departure from Zimpapers was a normal one.

Moyo and Mkushi said Sithole’s job in the IOC required him to travel extensively, thus disrupting his focus on Zimpapers, a point strongly disputed by top newspaper sources. Moyo and Mkushi were not available for comment on Wednesday.

“Moyo has not been comfortable with Mungoshi (the new Herald editor), whom he sees as not having done enough to use the Herald to revamp the government’s battered image since he took over last year,” said a top

“In fact, as far as Moyo is concerned, there hasn’t been much change in the Herald from the days of Bornwell Chakaodza.”

The fate of the editors was unclear on Wednesday, but authoritative sources said they still would be removed when a new chairperson is appointed to replace Sithole.