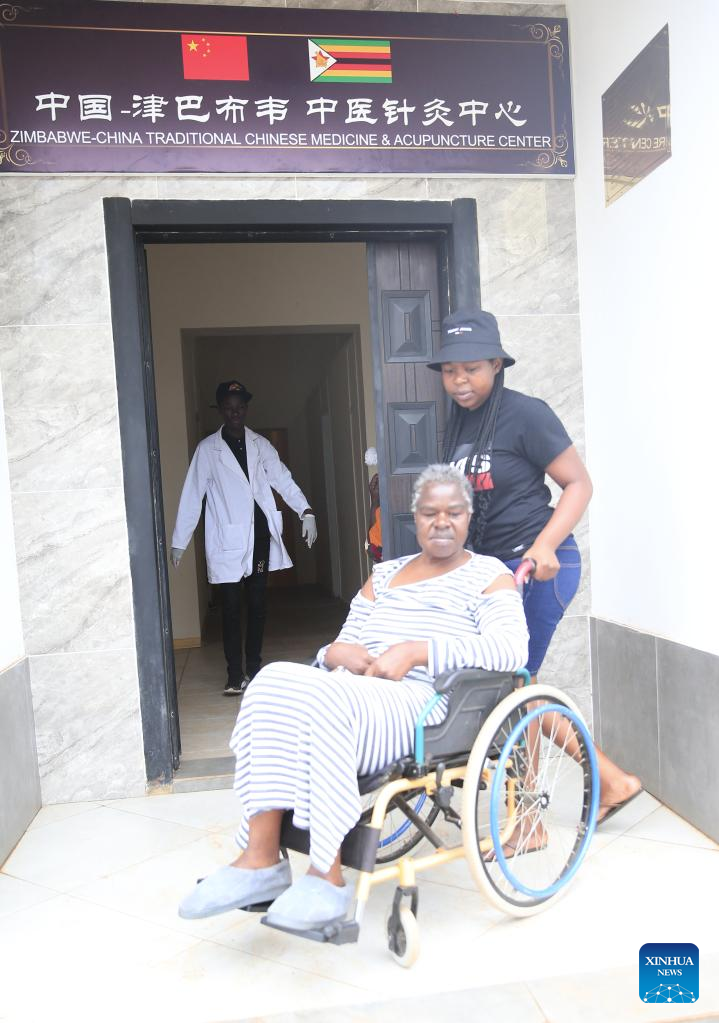 Since a TCM center was opened at Parirenyatwa Hospital in the capital Harare in 2020, thousands of locals with different ailments have thronged the center to receive treatment free of charge.

Charity Nyakurimwa, one of the patients who have received treatment at the center, said she opted for acupuncture due to its non-invasive nature.

“I was having sciatic nerve pain on my right leg because of the nature of my job — I will be standing most of my time, so the pain was now radiating to my back. So I said oh! There is a Chinese center which is giving acupuncture to patients. So that’s when I decided to come for acupuncture,” Nyakurimwa told Xinhua.

“So I came in and I had acupuncture done on me on my right gluteal muscle, and my back, after that the pain was much much better,” Nyakurimwa added.

Another patient, Catherine Sadza who suffers from arthritis, said she has witnessed significant progress since she came for her first session of acupuncture.

“I came here with a problem with my neck, my hand, and my knees. When I came here they performed acupuncture, now I am feeling better than before,” she said.

TCM is a holistic ancient system of health and wellness that has been used in China for thousands of years. It encompasses several therapeutic methods that include acupuncture, cupping, Chinese herbs, Tai Chi among others.

Zhu Wei, a TCM doctor at the center, and Captain of the 19th Chinese Medical Team in Zimbabwe, said the ancient knowledge system is proving to be a viable medical alternative.

A man receives acupuncture treatment at a Traditional Chinese Medicine center at Parirenyatwa Hospital in Harare, Zimbabwe, on Nov. 28, 2022. (Photo by Shaun Jusa/Xinhua)

“We are planning to train more local doctors who can specialize in acupuncture and they can help more people,” Zhu said.

Richard Mutingwende, a Homeopathy Specialist and a TCM Trainee at the center, said Chinese medicine has many advantages.

A woman receives acupuncture treatment at a Traditional Chinese Medicine center at Parirenyatwa Hospital in Harare, Zimbabwe, on Nov. 28, 2022. (Photo by Shaun Jusa/Xinhua)

“And also it can address so many health conditions such as arthritis, spinal injuries, chronic conditions, such as diabetics, such as hypertension, so it has so many advantages than any other type of medicine, and also reliable because it has been in existence for the past 5,000 years compared to other systems of medicines,” he said.

“I will be doing acupuncture, moxibustion and also Tai Chi. Such types of treatment are very safe, they are non-invasive,” he added.

Soo Bishop, a patient who sought medical attention at the center after suffering from muscle spasms in her shoulder, neck and head, said as a form of natural intervention, traditional treatments are beneficial.

Bishop said her condition improved a lot following her acupuncture sessions at the center.

People are seen at a Traditional Chinese Medicine center at Parirenyatwa Hospital in Harare, Zimbabwe, on Nov. 28, 2022. (Photo by Shaun Jusa/Xinhua)

Tatenda Chimbunde, a trained Pharmacist and a TCM Trainee at the center, said unlike conventional medicine, TCM has no side effects.

In addition, Chimbunde said TCM is more beneficial since it addresses the cause of the problem rather than just treating the symptoms.

After witnessing first hand the benefits of traditional remedies, Chimbunde hopes to pursue a career in TCM.

“In the near future, I hope to be able to practice acupuncture on many people with different ailments, as well as working in the public sector as well as in the private sectors,” she added.

Zimbabwe and China share a long period of cooperation in the health sector. Since 1985, China has dispatched 19 medical teams to the southern African country.