Two-legged dinosaur from Zimbabwe is oldest ever found in Africa 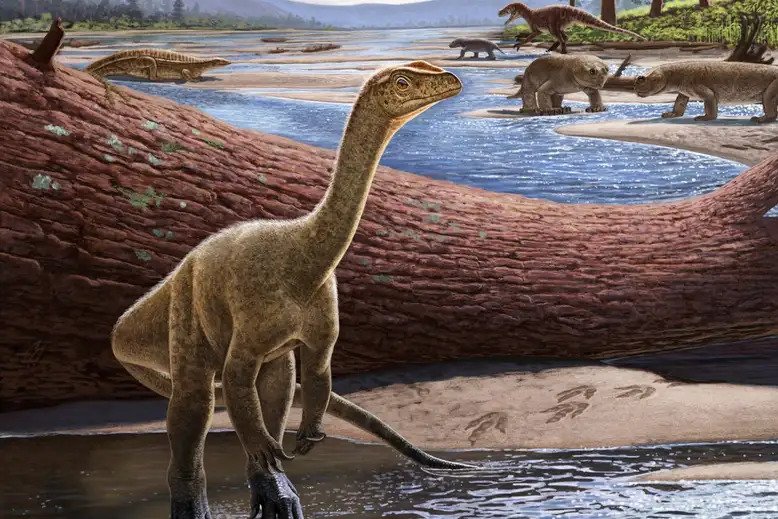 CONNECTICUT, United States – The remains of a new species of plant-eating dinosaur has been unearthed in northern Zimbabwe. It is part of a huge assemblage of fossils from the Late Triassic that could help us understand how the period’s climate influenced the dispersal of early dinosaurs.

The near-complete fossil is the oldest dinosaur fossil found in Africa to date. It has been identified as a species of sauropodomorph, ancestral relatives of the sauropods – the huge, long-necked dinosaurs that walked on four legs.

Named Mbiresaurus raathi, the dinosaur stood at least a metre tall, ran on two legs, weighed around 30 kilograms, and had a small head, a long neck and serrated, leaf-shaped teeth.

It was unearthed on the second day of an expedition to Mbire in the Zambezi Valley in 2017, says Christopher Griffin at Yale University, who found a dinosaur femur sticking out of the ground, dug around it and discovered a hip bone.

“I kept digging, got more of the team to help out, and we recovered nearly the entire skeleton,” he says. “The rocks it was found in have been interpreted as a river deposit, and it may have been buried in a small-scale flood.”

Based on the presence of other fossils in the assemblage, the team has dated M. raathi to around 230 million years ago, part of the Late Triassic called the Carnian stage. At that time, Zimbabwe was much further south than it is today, and part of the massive supercontinent Pangaea.

Latitude played a big role in Pangaea’s climate, scientists suggest, because of the reduced influence of the sea on the single landmass. Higher latitudes, like those at which Zimbabwe was located at the time, probably had greater humidity and abundant vegetation, in contrast to the more arid, unstable lower latitudes.

“We would expect that you could draw a straight line joining northern Argentina, southern Brazil and India at this time, and everywhere along that line would have a very similar climate. This imaginary line goes right through Zimbabwe,” says Griffin.

Griffin and his team used this climatic line to help pinpoint a possible source of fossils. Their second clue about where to look came from a 1992 paper by Michael Raath that reported the discovery of fossils of the rhynchosaur, a Carnian-aged reptile, in the Pebbly Arkose Formation in the Dande area of northern Zimbabwe.

Raath also reported a single fragment of a bone he thought might be from an early dinosaur. These discoveries meant that Zimbabwe had rocks from the right age to preserve fossils from this era.

The team used a geological map of the area to determine the location of those rocks and Google Earth satellite photos to pinpoint where they were exposed at the surface, before visiting sites to look for fossils.

At one site the researchers found hundreds of bones, mostly from rhynchosaurs, but also fragments they recognised as being from a dinosaur. It was here that Griffin spotted the protruding femur.

Two expeditions, in 2017 and 2019, revealed an assemblage of animal remains, including those of a large carnivorous herrerasaurid dinosaur, ancestors of mammals called cynodonts and crocodile ancestors called aetosaurs.

Zimbabwe’s Zambezi Valley is already known for its occasional dinosaur bones and a trackway of dinosaur footprints, but M. raathi is older.

“What this means is that Zimbabwe records the transition from the earliest dinosaurs, when they were more rare, to a time when dinosaurs had become much more abundant and dominant,” says Griffin.

Anusuya Chinsamy-Turan at the University of Cape Town, South Africa, says the latest find provides a unique glimpse into the faunal diversity that existed in that part of northern Zimbabwe 230 million years ago.

“The fact that the fauna resembles other similar-aged Carnian deposits in Argentina, as well as in Brazil and India, strongly supports the hypothesis that the distribution may be linked to climatic barriers,” she says.

In July, she and her colleagues described a new iguanodontian dinosaur (Iyuku raathi) found in South Africa’s Eastern Cape Province. Having two dinosaur finds from Africa announced just a month apart is, she says, “tremendous”.

The new Zimbabwean fossil find comes as Australian firm Invictus is next month expected to begin exploratory drilling for oil and gas across a vast section of the Cabora Bassa Basin, the area in which the fossil-rich rocks are deposited.

“It is my earnest hope that the necessary agreements are in place for the safety of the fossils, as well as for rehabilitation post exploration,” says Chinsamy-Turan.

(This article was originally published by The New Scientist)