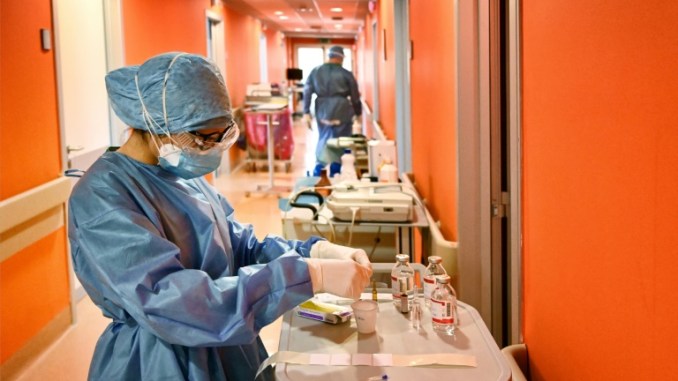 The UK has recorded its deadliest day in the coronavirus pandemic, as the Government’s chief scientific adviser warned parts of the NHS were like a “war zone”.

Official figures showed that January 12 saw the highest number of deaths recorded on a single day – with 1,110 Covid-19 fatalities, eclipsing the previous peak of 1,073 on April 8, 2020.

A record 1,820 further deaths within 28 days of testing positive for Covid-19 were reported as of Wednesday, although there is a time lag between a patient dying and appearing in the statistics.

The grim statistics appeared as Sir Patrick Vallance gave a stark warning about the strain the pandemic was putting on hospitals.

“This is very, very bad at the moment, with enormous pressure, and in some cases it looks like a war zone in terms of the things that people are having to deal with,” he said.

But there was “light at the end of the tunnel” in the form of the vaccination programme, which has so far seen 4,609,740 people receive a first jab.

Based on the latest figures, an average of 399,625 first doses of vaccine would be needed each day in order to meet the Government’s target of 15 million of the highest priority patients receive a jab by February 15 – on Tuesday the total was 343,163.

HEALTH Coronavirus
(PA Graphics)
Answering viewers’ questions on Sky News, Sir Patrick warned that vaccines were not doing enough of the “heavy lifting” at the moment to consider easing lockdown restrictions, with case rates needing to decline further before ministers could consider relaxing the measures.

The Government has pledged that all those in the top priority groups, including the over-70s and frontline health and social care workers, will have received an offer to have had their first dose of the jab given to them by mid-February.

“The advice at the moment is vaccines are not going to do the heavy lifting for us at the moment, anywhere near it,” Sir Patrick said.

“This is about, I’m afraid, the restrictive measures which we’re all living under and carrying on with those.

“The numbers are nowhere near where they need to be at the moment, they need to come down quite a lot further – we need to make sure we stick with it.

He suggested tougher measures could have been needed earlier in the pandemic.

“I’m afraid that’s a grim message but that is what the evidence says – you’ve got to go hard, early and broader if you’re going to get on top of this. Waiting and watching simply doesn’t work.”

Slideshow preview image
He said it was hoped that as the vaccine took effect and cases dropped, it would be possible to start a “slow release” of some of the measures – but there would not be a “big bang” relaxation.

Pfizer has said it is reducing deliveries for the next three to four weeks while it makes improvements to its factory in Belgium, while AstraZeneca expects to scale up to two million doses per week before or by mid-February.

The British Medical Association (BMA) criticised the Government over a lack of transparency around vaccine supply, which is impacting the speed at which jabs are rolled out.

In a statement to the PA news agency, GP committee chairman Dr Richard Vautrey said: “Despite having the staff and resources available, some GP-led sites are not able to vaccinate patients at the rate at which they could if they had continued access to the vaccine.

“As well as accelerating the delivery of supplies to ready and willing sites across the country, the Government needs to be honest both with the public and practices about what supplies are available.”

– Home Secretary Priti Patel was recorded admitting that the Government “should… have closed our borders earlier” and said she had pushed for that last March.

– Covid-19 vaccines may be less effective against the South African coronavirus variant, researchers there warned in a paper which has not yet been peer reviewed.

– The Government’s programme to test pupils and staff daily in England’s secondary schools and colleges as an alternative to self-isolation will be “paused”.

HEALTH Coronavirus
(PA Graphics)
In a sign the lockdown measures in England are having an impact, analysis by PA shows Covid-19 case rates in two regions of England are at their lowest level since before Christmas.

Eastern England is currently recording a seven-day rate of 526.8, down from 763.5 and the lowest since December 20.

All regions of England are continuing to show a week-on-week fall in seven-day rates, though levels are dropping faster in some areas than others.