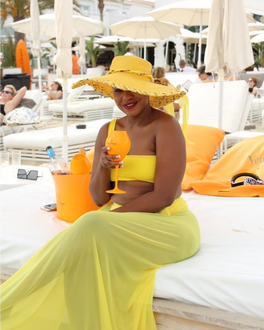 Michelle recently announced an engagement although she did not disclose the man involved.

Looking at her past, Michelle is very unlucky when it comes to love relationships. After leaving an abusive relationship with South Africa based Zimbabwe tycoon Uncle Roland, she fell in love with a top married Harare lawyer who died behind wheels in December 2017.

Mystery surrounds the circumstances leading to the fatal accident that claimed the life of prominent Harare lawyer, Edmore Jori who left behind his wife and three children.

But while the legal fraternity, family and friends were plunged into mourning, the intrusive social media was awash with theories on what might have led to the fatal accident.

All the theories featured Jori’s lover and trendy Harare businesswoman, Michelle Kawome, who is suspected to be VP Chiwenga’s sweetheart.

However, police say Michelle has nothing to do with Jori’s fatal accident.

Many are saying she is the new girl in VP Chiwenga’s life after his marriage to former model Marry Mubaiwa ended in scandalous fashion which saw Marry facing a slew of criminal charges including attempting to murder VP Chiwenga.

It is not everything you are accused of that you waste your time explaining. Allow people to solve their quadratic equations.-Hararelive