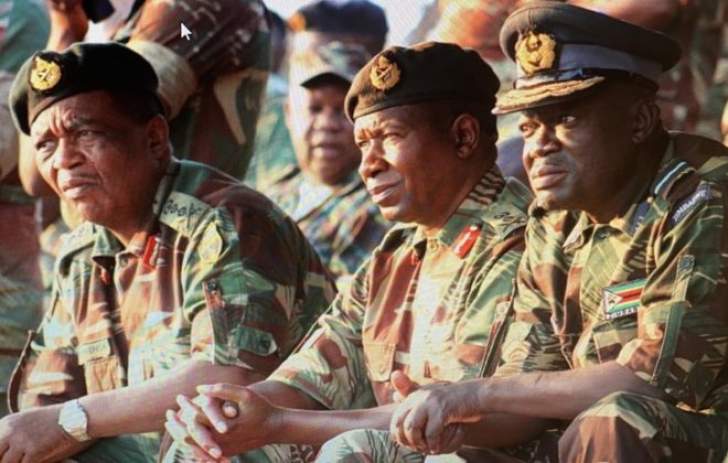 BERLIN– Vice President, Rtd General Constantino Chiwenga, is now reportedly being prepared to takeover the presidency from President Emmerson Mnangagwa, by the country’s military on a transitional term, to finish Mnangagwa’s remaining first term, Spotlight Zimbabwe, has been told.

High ranking officials inside the Office of the President and Cabinet (OPC), aware of the fresh unfolding developments, said army generals do not want another putsch and expected Mnangagwa to resign peacefully and leave the stage for VP Chiwenga.

However another faction of the army with hardline elements, is said to be open to using force to push Mnangagwa out, should he attempt to dilly-dally with tendering his resignation.

Mnangagwa came to power through the backdoor, using a “military assisted intervention” to topple former leader President Robert Mugabe in November 2017.
Mnangagwa then finished off Mugabe’s remaining eight months in office. The ruling Zanu PF first secretary, was then controversially elected as president, in a disputed poll for his first official term in August 2018.

The OPC officials speaking in confidence, this week said Mnangagwa has told security chiefs that he was ready to step down in a dignified manner, and even offered a set of possible dates for his departure.

Spotlight Zimbabwe, was first to report in March that security chiefs had reportedly finalised Mnangagwa’s departure from power, as the leader of the country.

Confirmed reports from military circles, also suggest that VP Chiwenga’s takeover of the reins of government from Mnangagwa as a transitional president, will be announced and broadcast on national television at the opportune time.

“Military chiefs do not want another coup, and have given Mnangagwa ample time to announce his resignation due to his economic failure and mismanagement,” said one senior officer close to Mnangagwa’s office.

“There is however a group of hardline commanders, who will not hesitate to use force, if there’s pussyfooting on Mnangagwa’s part to resign in peace. We shall all have a clear direction of where our country is going once the lockdown is completely lifted.”

A fortnight ago Mnangagwa put up a brave face, using his alleged faction members in the working National Security Council (NSC), to put on what many now suspect to be a choreographed press conference act, to deny any imminent threats of a coup in the country.

” It is now as good as done (Chiwenga’s pending ascendancy),” said another OPC official who has served in all of former leader Mugabe’s administration and survived being purged by Mnangagwa.

“The vice president is going to be President soon, on a transitional term to finish off Mnangagwa’s term. I understand the exact date of Mnangagwa’s exit is now officially known by the top leadership of the military, who may choose to make it public.”

Ministry of defence sources last week told this publication that, Chiwenga was likely going to include some opposition officials in the incoming transitional regime, for the “purposes of political and economic stability”.

The VP, we gather is also going to appoint “his quartet of generals” into the new government, where they’re being considered for cabinet posts, in security related ministries.

The four retired generals include: retired Lieutenant Generals Martin Chedondo, Douglas Nyikayaramba, Anselem Sanyatwe and Air Vice Marshal Shebba Shumbayaonda.
Mnangagwa removed them from their posts in the army, in February last year and “promoted” the quartet to diplomatic service, while Chiwenga was absent in India for treatment at the time.
Spotlight Zimbabwe, have it on good authority, that VP Chiwenga intends to endorse a prolific former Zanu PF member and cabinet minister, to succeed him as president in 2023.

“Depending on his health and fitness, Chiwenga is going to go around the country introducing his successor at star rallies, shortly before his tenure ends,” said a Mnangagwa current serving minister, who asked not to be named.

The vice president’s office lines were giving an engaged tone since midweek, when we sought a comment on this story.