“You sing it better than I do.

That is what The Voice 2016 coach Pharrell Williams had to say of Zimbabwean origin Brian Origin’s blind audition for this year’s edition in which he song the smash hit Happy. 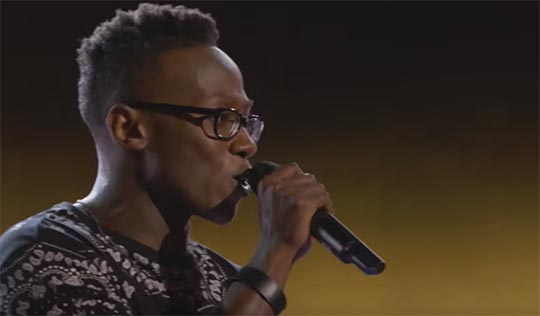 Nhira is based in Oklahoma has been travelling with his family for 16 years. He says he has been singing since he was 4 and his rendition of Jesus Loves Me put that story beyond doubt.

Watch the video in full below. Brian is completely adorbs in this.

Stepping on the stage of the American prime-time show, The Voice, 23 year old Brian Nhira took a bold move, singing his own rendition of Voice coach Pharrell Williams’ hit Happy.

And the move paid off, earning Nhira a spot on the show and on team Pharrell.

For some watching, Nhira was a young musician who managed to pique the interest of coaches Williams and Blake Shelton, but for Zimbabweans the moment they heard Nhira say his name and give a brief history of his family, ears tuned in.

“Man my parents came here from Zimbabwe, Africa. My dad’s a traveling minister and our family traveled together for 16 years of my life,” Nhira said after being asked what his story was by Williams.

Speaking to VOA, Nhira explained more about his family, who he said have really supported him in his musical journey.

“My parents (Edwell and Constance Nhira) came to the United States in 1988.  My dad was in search of educational opportunities … originally the plan was just to be here for a year, but since stuff opened up for him to come to Tulsa, Oklahoma, and attend Oral Roberts University, and my mom, she brought my big brother and sister over from Zimbabwe and they’ve been here ever since.” Nhira, who discovered his musical talent at the age of four, singing a tune called Jesus Loves Me, said he was honored to represent Zimbabwe.

“Zimbabwe is so near and dear to my heart, my parents are from there. I was born in the U.S but I go back every year to Zimbabwe, I spend a lot of my summers in Zimbabwe, singing and speaking there, and so, man, I am honored to represent this great nation.”

Nhira’s frequent visits to Zimbabwe have defined him, he said, adding that the Zimbabwean culture has been instilled in him by his family.

“There’s a simplicity about the people of Zimbabwe that to me has marked my life forever, the simplicity is so beautiful.  You know we don’t need much, all we really need is our family, some good food, church, and we’ll be a’ight.”

On the Voice, Nhira is now preparing for the voice battle rounds, hoping to continue to the end. His team coached by Williams currently has 11 other singers.

Interview with Brian Nhira, 2016 Contestant On The Voice

He said the response from the Zimbabwean community has been overwhelming, especially from those who have been following him on social media. But overall his family here and in Zimbabwe have been more than supportive of the process.

“They always support, my parents are my biggest supporters, they just, ahhhh, they just loved this process and its funny, that on the night that my blind audition aired, you know social media and twitter you know was almost more excited and happy to see my mom (laughing) than me (laughing)”

In the “Battle Rounds,” each coach pairs two of his or her team members to perform together, then chooses one to advance in the competition. For Nhira this will be the test to see if he moves on the next round.

But Nhira still has his sights on all things familiar, his annual trip back home to Zimbabwe, this time with hopes of having a concert.

“I’ll be there the first week of June, so when I am done with this, I will be traveling over to Zimbabwe where I hope to spend time … we are hoping to put together something, you know a concert or something, out there.”

Nhira said regardless of what happens on The Voice, he is excited to continue his musical journey and pushing his debut album Hope’s Stand.