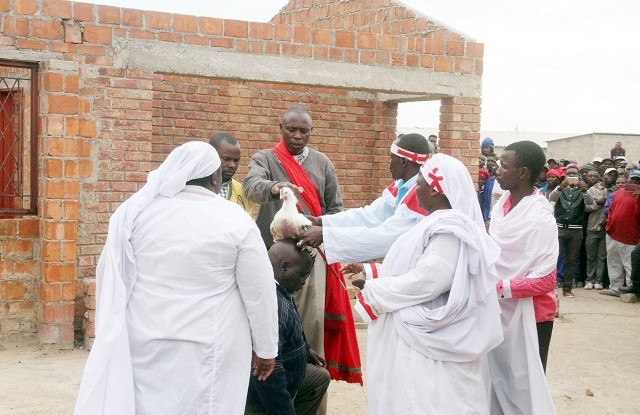 PROMINENT Bulawayo prophet Madzibaba Emmanuel Mutumwa, who recently made headlines for “vanquishing” a Binga businessman, who allegedly used mubobobo on more than 50 women, has made claims that he also rid a school of a goblin that had been terrorising teachers and learners.

He said the school – Masenya Primary, which is located in Masenya village, where some teachers and learners had abandoned the school following the attacks from the said alleged goblin.

“Teachers had also fled the school and it was on the brink of closure. Some of the teachers heard about the service we had been holding to cleanse a certain part of the village and they decided to attend,” said Madzibaba Mutumwa.

He said during the service he received a vision about the troubled teachers.

“The headmaster and some of the teachers came forth seeking deliverance from the creature. We went to the school to exorcise it from the goblin, which had been buried within the school and one of our church members whom had been tasked to dig a hole to unearth it was attacked. He began having chest pains and had trouble breathing but later recovered after receiving treatment,” said Madzibaba Mutumwa.

He said they burnt the creature, cleansed and prayed for the school to prevent it from ever being haunted.

The school’s headmaster Mr Ncube confirmed the incident saying he was relieved that children would now have a chance to education.

“I have never experienced such in my life, this was scary but we are grateful to the lord and his messengers for rescuing us,” he said.

Zimbabwe to get US$1 billion from the IMF for free