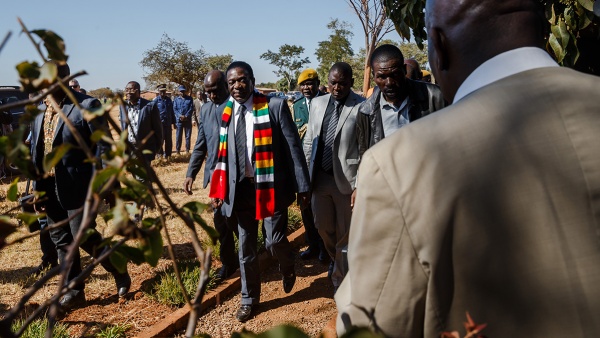 Ngoni Tinarwo (41), a resident of Zimbabwe’s mining town of Kwekwe counts himself very lucky. On August 29 last year, a gang of well-known people (that he alleges was sent by his opponents in the gold mining sector) attacked him in broad daylight near his family home.

He fought off the attackers until he managed to reach safety, but not before the machetes had dealt serious injuries on his shoulder, knee and back. Two days later, the attackers daringly stormed Kwekwe General Hospital, where he had been admitted, intending to finish him off. Thankfully, the hospital staff, which has become accustomed to such cases, acted swiftly by transferring him to another city.

As he recovered and adjusted to a new painful life with disability, he knew that the people who had tried to kill him outside his home and in hospital could come for him again. While Tinarwo counts himself lucky, hundreds of others cannot say the same; many have been killed in cold blood in Zimbabwe’s brutal war raging within the country’s goldfields. Gangs of artisanal miners are fighting for control of both the mining claims and trade of the precious metal.

Reports from security agencies and human rights organisations are showing a worrying increase in violent killings within goldfields where tens of thousands of impoverished citizens eke out a living through artisanal gold mining activities. Coordinated killings are increasing.

The Kwekwe Central constituency legislator, Masango Matambanadzo, says the violence is so intense that in some cases between three and five people are killed daily in these machete attacks. In early November, Zimbabwe Peace Project (ZPP), a NGO reported that 105 people had been killed in the mining town of Kadoma in three months from August to October this year, while hundreds of others were severely injured in these machete attacks.

In its report titled “Who will protect citizens from their ‘supposed’ protectors?” the organisation said the majority of the machete hit squads, infamously known as MaShurugwi and AlShabaab, come from President Emmerson Mnangagwa’s home province of Midlands.

“Mining gangs are fighting a brutal war against each other and citizens are often caught in the crossfire or in some instances targeted by these gangs,” the ZPP report said. “Between the months of August and October a total of 105 murder cases have been recorded in mining areas surrounding Kadoma while 221 cases of assault have been recorded.”

ZPP expressed concern that the artisanal miners who are involved in machete wars are never arrested as their supposed patrons, who are suspected to be senior politicians, protect them.

“These figures (of murder cases and injuries from machete attacks) indicate that there is a marked increase in lawlessness in the area and innocent citizens are also suffering at the hands of mining gangs. This is further exacerbated by the fact that the gangs seem to be enjoying impunity as most of them continue without being arrested,” said the report.

Four years ago, the government of Zimbabwe decided to decriminalise artisanal gold mining. The move, which has severe effects on the environment, sought to help the country to earn more from gold exports.

So far all indications are that this move, which was also informed by political considerations, is bearing fruit as the country which produced about 30 tonnes of gold last year from a paltry three tonnes a few years ago, is now targeting tripling the output to over 100 tonnes in the next four years.

The bulk of this gold comes from these artisanal miners. However, this increase in the national gold output has its true cost hidden in the lives lost through this nationwide spike in cases of machete attacks.

Police always say they do their best to arrest all criminal elements, but once the cases get into the judiciary system, the suspects are either discharged on technicalities or set free on bail something that results in the impression that nothing is being done about these cases. Even the army has voiced concern over the machete attacks that it says are now a serious threat to peace and stability in the country.

President Mnangagwa recently pledged to stump out these machete wars, saying they were soiling his administration’s image.