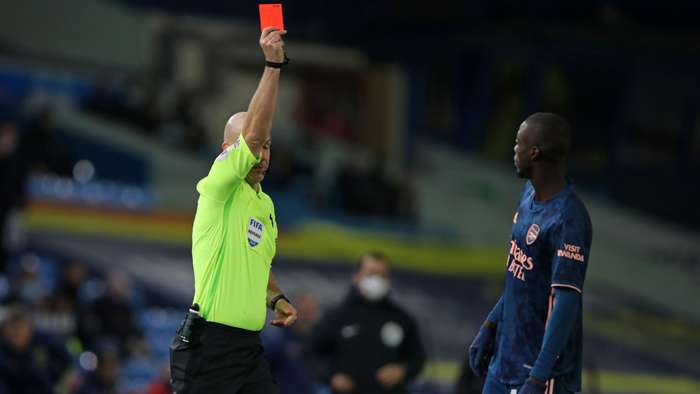 Mikel Arteta stood motionless as he watched Anthony Taylor make his way over to the VAR screen.

The Arsenal boss already knew what was coming, everybody did. It was just a matter of time until Taylor brandished a red card and sent Nicolas Pepe back to the changing room.

The Ivory Coast international pretended to be shocked when the card was eventually shown, but the official had been left with little option.

The contact may have been minimal and Ezgjan Alioski certainly made the most of it, but Pepe had thrust his head at the Leeds full-back in an off-the-ball incident and a red card was always going to be the end result.Goal 50 Revealed: The best 50 players in the world

Quite what Pepe was thinking only he will know, but it seems a long way back for Arsenal’s club-record signing now.

He will miss the next three Premier League games, against Wolves, Tottenham and Burnley, with the match against Southampton on December 15 the net match he will be available for outside of the Europa League.

But it is probably going to be a lot longer than that until the former Lille man gets another opportunity to impress under Arteta.

Sunday’s game at Elland Road was a huge chance for Pepe, one he has been waiting patiently for.https://www.youtube.com/embed/rcYfNLzzvCc

“My goal is to play more. Have a little more playing time,” Pepe told Canal+ during the international break.

“He [Arteta] wants me to be 100 per cent focused during the 90 minutes of the match. Afterwards, I see during training that I will be a substitute the following weekend. It is frustrating for any player to be on the bench.”

Well, he is going to have to get used to being on the bench again now.

Arteta will be fuming at what he saw from Pepe at Elland Road. “It’s unacceptable, I’ve told him,” he told Sky Sports immediately after the game.

Fortunately for Arsenal, it did not cost them defeat as their 10-men managed to see out the game for a 0-0 draw.

But that will not make a difference for Arteta, who had been under growing pressure to start the 25-year-old due to the poor form of summer signing Willian.

The Arsenal boss gave the fans what they wanted in West Yorkshire, but the winger let him down badly.

Contact with Alioski may have been minimal, but the moment he thrust his head forward in a forward motion there was only going to be one outcome – especially in these VAR times.

Pepe had actually been one of Arsenal’s brighter players up to his sending off, which came on 51 minutes.

He had curled one cross against bar in the first half and sent another effort wide, which had Leeds keeper Illan Meslier scrambling across his goal.

But his moment of madness outweighed all the good he had done, and now he will face a real fight to get back in Arteta’s good books and back in the side.

What could help him is Arsenal’s current form. Although they avoided defeat here, they were wretched for large spells of the games.

Leeds had 25 shots to Arsenal’s nine and hit the woodwork three times. Bernd Leno also had to be at his very best to keep out Patrick Bamford and Stuart Dallas.

The visitors meanwhile offered little going forward, despite Pierre-Emerick Aubameyang finally starting in the central striker role rather than his usual position on the left of the attack.

It took 60 minutes for Arsenal to register a shot on target, and they only had two during the entire game.

They did, however, have a golden opportunity to win it late on when Bukayo Saka – who was excellent having replaced Joe Willock just before the hour mark – raced onto Hector Bellerin’s through ball.

Saka took a touch and tried to round Meslier, but he did not knock the ball far enough and the Leeds keeper managed to keep out the teenager’s shot.

It would have been a classic smash and grab had that gone in, and would have been very harsh on Leeds. But it was the type of chance that you have to be taking, especially when you are a team like Arsenal who are struggling to create at present.

Arteta’s side now sit 13th in the table and have picked up just four points from their last five games in the league.

The Spaniard made changes in terms of formation and personnel against Leeds, but it was a case of same old story for his side – who have now gone just short of eight hours since scoring a goal from open play in the Premier League.

Things just are not clicking for Arsenal right now and they look an average team. They need their big names to start performing quickly.

Unfortunately for Arteta, one of them let him down badly at Leeds.