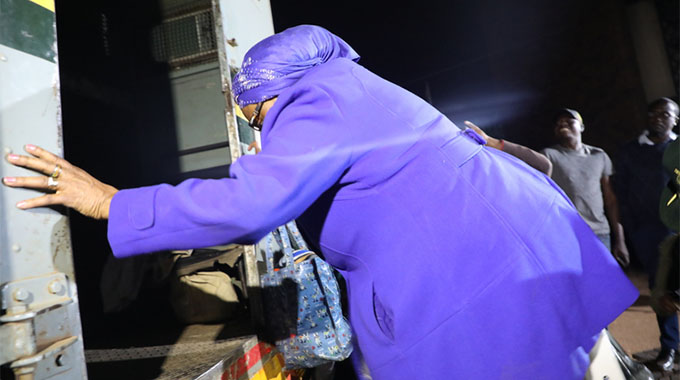 ZACC PLEASE MAKESURE YOU HAVE INFO ON ALL HER CORRUPT DEALS INCLUDING THESE BELOW;

1. $40million Mupfumira is supposed to have given command Agric from NSSA

2. Land deal in Chegutu which was worth $1.5m but was sold to NSSA for $3.3million. Apparently Phillip never owned Travis land that he sold to NSSA and this can confirmed by Chegutu Council.

3. Packaging company she co owns with Hon Kindness Paradza where the rice from Social Welfare was being packaged from charging 10x more the market price.

4. Apple Valley School in Chinhoyi that she built using cement from Social Welfare meant for building clinics in Zimbabwe rural areas. The school is being fronted by Charles Mutisi.

5. 100 stands in Chinhoyi. Town Clerk Kaitano & Councilor Voster Mashevedzanwa must be called to account.
6. Chinhoyi residents were made pay deposits for low cost houses to be built by Nssa but never got anything as no houses have been built to date. The land in question belonged to Phillip Chiyangwa and was worth $2.8million but NSSA was charged $6million. NSSA had declined to purchase the overpriced land but was forced to complete deal by Mupfumira because she was going to benefit from the sale proceeds. It is believed she got 2-3million from the deal. This deal was fronted by Mike Chimombe so he needs to be accountable.

7. Vast lands they co own with Phillip Chiyangwa which were acquired for next to nothing from the Mash West councils and Local Govt.

10. Investigate Shingi Munyeza as he also the one who was taking hard cash out of the country for Mupfumira. Externalisation.

12. Mugg & Bean Franchise in Zimbabwe is owned by Mupfumira and Shingi Munyeza

13. Investigate Charles Mutisi who is Mupfumira’s proxy on all her deals

14. *This week 3 suitcases of hard cash in $5rtgs new notes were delivered to Chinhoyi* The money was intended for bribing Chinhoyi council officials in order to cover her shoddy land deals. V11s available.

16. All the money that was siphoned through Metbank was sent to offshore accounts by Ozias Bvute so he should be called to book as he is part of the cartel

17. Mupfumira is a leader of a very big cartel in Zimbabwe in which Moses Chigwena of Croco Motors is a member. She is the one who facilitated a farm takeover in Mwenezi which was given to Chingwena with the assistance of Josiah Hungwe prejudicing the War Veterans who were on the land.

19. She bought a house in Switzerland and the United Kingdom.

20. She owns penthouses in Sandton South Africa which are managed by Charles Mutisi.

21. On taking on the Min of Public Service she fired and employed her friends and relatives including the board members and also repeated the same in Min of Tourism

22. Mupfumira is the one that caused Victoria foods to fold as she is believed to have stolen a lot money from the company. Remember the Olivine Scandal, this woman was the architect. That’s where she learnt the art of stealing.

23. Investigate Godfrey Mavhakeni as monies were transferred to him from NSSA as payment of non existent services or bogus services. He would in turn give the money to Mupfumira.

24. Investigate the house in Cape Town that Mupfumira bought for Sekai Nzenza hence the reason she is withholding the NSSA Audit Report. She has vested interests. Nzenza was given $2million to keep mum.

25. Mupfumira used to take 10% on every NBS bank building projects

26. Mupfumira daughter’s wedding Bessie was funded by NSSA. The air tickets for the wedding were paid for through the ministry from NSSA.

27. Vela through NSSA sponsored all sports tournaments in Makonde for Mupfumira and purchased t-shirts, soccer balls and made such payments

29. Mupfumira son would tell executives that they must accept certain deals that were to be presented to them because he had direct interests. If the executives did not they would be threatened by Mupfumira with losing their jobs*

30. The S Class Mercedes Benz that is used by Tariro Mupfumira was purchased by NSSA at the instruction of then Minister Mupfumira. The NSSA workers keep feeding information to the public and anyone who will listen*

31. Mupfumira built a new grand house for herself in Mt Pleasant next door to where she used to live before.

32. She also built a double story house for her son Tariro Mupfumira which was completed within 2 months.

33. *Child trafficking*In 2018 Mupfumira *SOLD* a child from Doma Children’s home in Mhangura, during her time as Min of Social Welfare to the former BRITISH AMBASSADOR to Zimbabwe CATRIONA LAING. She was paid $500k usd for this child. The child’s name was A*n*ya. Check the F1 forms Laing completed at RGM airport on departure. 🤝

In the absence of a clear explanation of how she managed to acquire such wealth Mupfumira must go to jail and the state must confiscate all her assets. Zero tolerance on Corruption.

If not this will mark the END of this dispensation. Don’t forget the mandate comes from the people of Zimbabwe. Beware of a crusade descending to Statehouse if this is handled the same way as before i.e. Catch & Release. No More Games Mr President.
@bossmedia