Home Entertainment Will Smith allows wife Jada Pinkett to have affair with young... 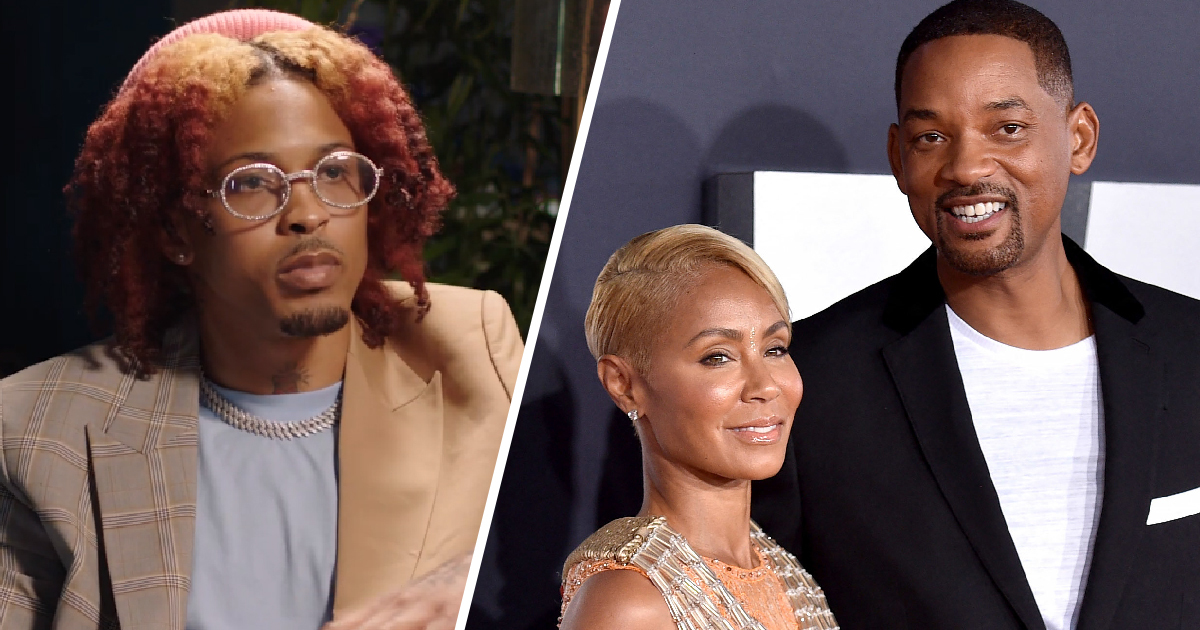 Will Smith and Jada Pinkett Smith’s marriage has kept the showbiz world talking over the years – and the speculation isn’t slowing down.

This week, singer August Alsina alleged that he not only had an affair with Jada, but that they were given Will’s blessing.

Although a rep for Jada, 48, said the claims were ‘absolutely not true’, Alsina, 27, told The Breakfast Club’s Angela Yee: ‘I actually sat down with Will and had a conversation. Due to the transformation from their marriage to their life partnership that they spoken on several times, and not involving romanticism, he gave me his blessing.AdvertisementAdvertisement

‘I totally gave myself to that relationship for years of my life. I truly and really, really deeply loved, and have a ton of love for her. I devoted myself to it, I gave my full self to it. So much so to the point that I can die right now and be OK with knowing that I truly gave myself to somebody.’Advertisement

This is the latest rumour in Will and Jada’s 23 year marriage, which has been plagued by speculating that they are in an open relationship.

Before Will met Jada, he was married to Sheree Zampino, with whom he shared son Trey.

However, he soon realised that he was meant to be with somebody that was not his wife.

Speaking on Red Table Talk, the Ali actor said: ‘[Jada and I] sat down at The Baked Potato and talked. There was a really unique, beautiful power. We had that moment and we connected, but I was married.

‘That next night, me and Sheree went to dinner, and I sat down with Sheree, and it was one of the most bizarre emotions I ever had. We were at The Palm and I remember I had to get up from dinner when I had a realisation that I wasn’t with the person I was supposed to be with.

‘I went into the bathroom in The Palm, and I broke down in tears. I was sitting in a stall in the restaurant and I was crying uncontrollably and then laughing like, “what the heck is wrong with me?” And I knew, that was the woman I was supposed to be with.’

Jada and Will began dating when he left Sheree, but when they were still married – and Jada admitted to her husband’s ex that she shouldn’t have started the relationship so soon.

Recalling Jada hanging up on a phone call with her husband’s ex because she was being ‘disrespectful’, Zampino said: ‘I called back and happened to say, “B**** you livin’ in the house I picked out”. And you said, “It’s my house now”.’ AdvertisementAdvertisement

Pinkett Smith said: ‘Well, I want you to know, that Will Smith let me have it. His take was, “That is Trey’s mother, and that’s just not your place”.’

The couple have been going strong for over two decades now, but they have been followed by rumours that they have an open relationship.

The speculation began in 2005, with quotes Will reportedly gave to the Daily Mail, reading: ‘Our perspective is, you don’t avoid what’s natural. You’re going to be attracted to people. In our marriage vows, we didn’t say “forsaking all others”. The vow that we made was that you will never hear that I did something after the fact.

‘If it came down to it, then one can say to the other, “Look, I need to have sex with somebody. I’m not going to if you don’t approve of it – but please approve of it”.’

In 2013, Jada told HuffPost during a Facebook Live: ‘I’ve always told Will, “You can do whatever you want as long as you can look at yourself in the mirror and be okay.” Because at the end of the day, Will is his own man.

‘I’m here as his partner, but he is his own man. He has to decide who he wants to be and that’s not for me to do for him. Or vice versa.’Advertisement

However, in a Facebook post about her comments, she wrote: ‘Here is how I will change my statement…Will and I BOTH can do WHATEVER we want, because we TRUST each other to do so. This does NOT mean we have an open relationship…this means we have a GROWN one.’

And the Matrix actress denied that they were ever swingers, as she was asked on Watch What Happens Live what the craziest rumour about her she heard was.

As well as the open relationship rumours, the couple have also been hit by cheating rumours.

In 2011, Jada was forced to deny an affair with JLo’s then-husband Marc Anthony, with a statement from Will saying: ‘Although we are reluctant to respond to these types of press reports, the rumours circulating about our relationship are completely false. We are still together, and our marriage is intact.’

And two years later, reports alleged that Will had been flirty with Margot Robbie at a party on set of their film Focus.

Star magazine alleged that Margot was seen flashing her underwear in a photo booth with her co-star, before Smith carried her via piggy back to a trailer.

However, Robbie denied the reports, tweeting at the time: ‘Been working non-stop, just catching my breath. There’s absolutely no truth to the ridiculous rumor in Star mag…It’s disappointing that goofing around on set could be taken so out of context.’Advertisement

And last year, Jada denied there had even been infidelity in their marriage.

She said on Red Table Talk: ‘I’m asked a lot about, “Is there infidelity in your relationship with Will?” And it’s like, “No, but there have been other betrayals of the heart that have been far bigger than I could even think in regards to an infidelity situation”. When you talk about contempt, resentment, neglect, it can just tear your world apart.’

It’s clear that Will and Jada have an unconventional relationship, with the stars choosing to follow their own rules.

Will, 51, revealed that they once briefly broke up, and said: ‘We essentially had to destroy our marriage. She was like, “I can’t do this anymore,” and to me… it was over, but divorce was never even an option.

‘We broke up within our marriage and got back together again. We had to rebuild with new rules and something way, completely different.’-Metro