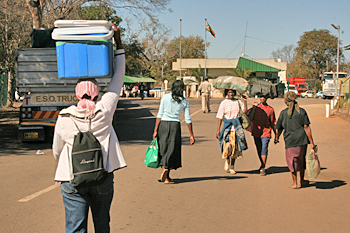 Zambian authorities have deported 62 foreign nationals, including 58 Zimbabweans, for over staying and not having proper documentation.

The majority of the deportees were rounded up at two guest houses in the capital Lusaka on Saturday evening.

The 58 Zimbabweans were handed over to the Immigration Department at Chirundu Border Post after arriving in two buses. Regional immigration officer Mr Joshua Chibundu confirmed the deportation, which took place on Sunday afternoon.

Zambian authorities could only confirm 51 women, who were netted in a joint Immigration and Zambian police raid.

“On 25 March, 2017, the Zambian immigration and the police arrested 55 foreign nationals in an operation conducted at two guest houses. Some were arrested at Katete Guest House in Chawama and Friends Inn in Garden township, Lusaka,” said the Zambian Immigration department in a statement.

Half of those arrested were undocumented, while the rest had overstayed.

Two females netted in the raid were from Malawi, one from Botswana and a South African man.

Some of those deported managed to find their way to their relatives, while others remained in Chirundu where they sought accommodation in the border post. The deported women are suspected to have been working as sex workers at various lodges and guest houses in Lusaka.

One of those deported said she was earning a living in that country and had no hope of returning home, saying she will try to sort out her papers before going back.-Zimpapers