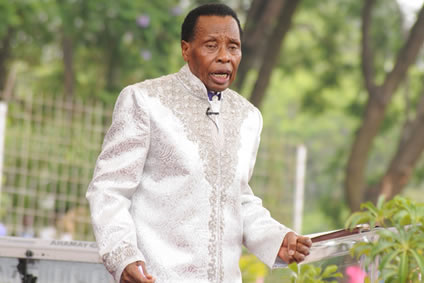 A VICIOUS power struggle is rocking one of Zimbabwe’s oldest Pentecostal church, the Zimbabwe Assemblies of God Africa (ZAOGA) amid reports that two factions are at each other’s throats, strategically positioning themselves for take over from the 98-year-old founder Ezekiel Guti.

So brutal are the internal fights such that one faction has technically held Guti hostage, pushing him to anoint a successor before his sun sets, Zim Morning Post reports.

Insiders close to the development told Zim Morning Post that Guti, since January this year, has been “taken hostage” at his Chitungwiza home on the pretext that “the man of God was instructed to go and work from Chitungwiza.”

“That is the official reason being pushed out there but we know Guti has been held hostage by a faction which has coalesced around his wife,” the source told the Zim Morning Post

“He is under involuntary house arrest. He is being managed to his death. ‘Chinhu chatorwa ne G40 yemuchurch’ (power has been grabbed by the church’s younger generation).”

Another church elder said no one can now have access to Guti because all those who were close to him have been booted out of their influential positions, leaving him exposed to power grabbers

“The fight began when properties were transferred from his name without his knowledge and it took his daughter from his first marriage to reverse the move,” the church elder said.

Asked where Eunor Guti (Guti’s wife) is when such things are happening, the source said “Apostle Eunor Guti is siding with a faction that is currently on the upper hand.”

“Without her involvement Guti could have been at his Chisipite home but she convinced him to go to Chitungwiza.”