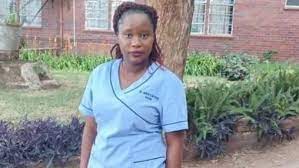 A Zimbabwean nurse identified as Divine Mupoperi was found laying lifeless in her apartment.

It was gathered that the deceased who relocated to the UK in November 2021 is survived by her 12 year old daughter and twins who are 16 months old.

Reports says Divine was found dead in her apartment on 9th January 2022 from suspected seizures during her sleep.

Although details of the incident is sketchy as the police is yet to confirm or comment on sad development.

See photos of the deceased below: