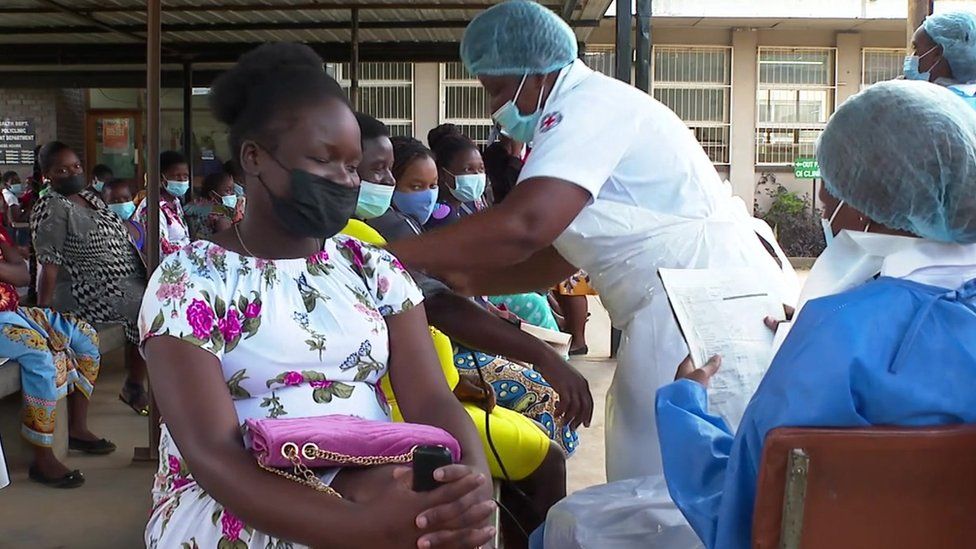 Health clinics in Zimbabwe are facing a crisis as increasing numbers of nurses leave the country in search of better prospects, as Shingai Nyoka writes.

The young woman in a dark green gown was in the throes of labour, her face twisted in pain.

Still for one minute and then groaning and writhing this way and that in the next.

I stood at the half-open door peering in, I had permission to be there for a story but felt more like a voyeur, an intruder in a deeply personal moment.

Two weeks earlier, the acting chief nursing officer for the authorities in the capital, Harare, Perpetua Kaseke, had shown me around this same clinic, the Warren Park Polyclinic.

She is responsible for the staffing at all the council’s health facilities.

She told me there were only four nurses on duty for the whole clinic, which serves hundreds of people every day.

Two in the maternity wing, one for outpatients and another for family services. Ordinarily they need a minimum of eight.

While we were talking, a nurse shot past behind me – she was doubling up her duties, covering the labour, delivery and post-delivery wards, as well as helping out in ante-natal care.

Seeing the pregnant woman – in labour alone in her most vulnerable moment – really crystallised the extent of the problem.

Matron Kaseke told me that most of her clinics were operating at 50% capacity. I sensed her frustration – nurses are overworked and stressed, she told me, and they keep resigning.

Most of them are going to the UK or Ireland, others to Zimbabwe’s neighbouring countries or to the private sector.

She said it can be hard to organise staffing from one minute to the next – some only give 24 hours’ notice before they leave.

None of the nurses at the clinic wanted to speak to me, I suspect some are processing their papers and preparing to leave.

Two nurses working at a desk
Image caption,
Staff are struggling to cope with the number of patients they now have to see
The UK has been on a recruitment drive for medical professionals to plug its own staff shortages due to the impact of the pandemic and Brexit.

Zimbabwe has long underpaid its public sector workers. Nurses employed by the city council earn slightly more than those working in government hospitals.

But in both cases, the nurse on the lowest salary takes home less than $200 (£150) a month, just enough to cover the rent for a two-bedroom house in a low-income neighbourhood, but not much else. And they are fed up.

The state Health Service Board says that just over 2,200 medical personnel left its services last year alone: 900 of them were nurses.

Matron Kaseke told me that at one point nine of Harare council’s 43 clinics had scaled down their operations or been closed completely for lack of staff.

I visited Matapi Clinic in the district of Mbare. Its doors were shut and covered in cobwebs.

Mbare is the most densely populated suburb in the capital, and needs these health services.

A group of men was eager to find out what story I was covering.

They used to receive medical attention at this clinic, but now must travel longer distances and have to wait for long periods.

At the nearby clinic that is still operating, staff were struggling to maintain order.

In the outside waiting area, a boisterous nursing assistant student was taking people’s blood pressure. The clinics and hospitals are now taking on more students before they are qualified to cover the gap.

It wasn’t always like this – public health facilities in Zimbabwe were once envied by other sub-Saharan African countries. But they disintegrated due to decades of under-investment.

In 1992, former first lady Sally Mugabe chose to be treated for kidney failure in a public hospital right up to her death.

Over 25 years later, it was a different story for her husband: former President Robert Mugabe opted to be treated in a private hospital in Singapore, where he later died, far away from the crumbling public healthcare system of his homeland.

line
From Our Own Correspondent has insight and analysis from BBC journalists, correspondents and writers from around the world
Listen on iPlayer, get the podcast or listen on the BBC World Service, or on Radio 4 on Saturdays at 11:30 GMT
line
So what’s it like for the nurses who do settle in the UK?

I spoke to one nurse who has been there since last July.

He tells me with a sense of accomplishment that he now earns about 10 times what he did in Harare, even though British nurses have low pay relative to other professions in the UK.

The money he sends back home goes a long way. He can afford to send his children to boarding schools in Zimbabwe and support relatives in a difficult position.

He has no plans to return any time soon.-BBC