GOVERNMENT has technically de-dollarised the economy by reintroducing local currency bank accounts, which will be traded in electronic transfers and bond notes only, and piled more taxes on the transacting public. 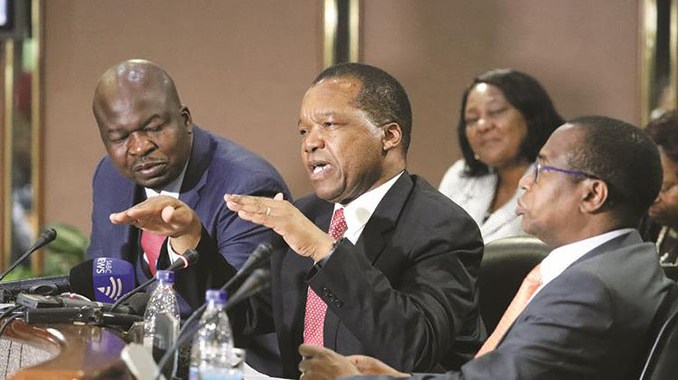 The measures, which will technically de-dollarise the economy and reduce existing FCAs to local currency accounts, take effect on October 15.

Mangudya said the Africa Export-Import Bank (Afreximbank) has agreed to provide a $500 million guarantee to the new nostro FCAs, which have been created to cater for exporters and other foreign currency earners.

It also means government has indirectly admitted that bond notes and RTGS balances cannot trade at par with the US dollar due to a growing mismatch between cash dollars and bond note/RTGS balances.

“Accordingly, all banks are directed to use their know-your-client principles to comply with this directive to separate the accounts without requiring their clients to complete any other documentation other than for new bank accounts.”

Zimbabwe is reeling under a harsh currency crisis, characterised by a persistent shortage of cash and foreign currency, which has given rise to an active parallel market where foreign currency, bond notes, RTGS balances and mobile money are traded.

RBZ announced the currency measures, purportedly to strengthen the multi-currency regime, currently in circulation, under a broader framework of 13 measures introduced to stabilise prices; boost the amount of foreign currency in circulation and support the productive sectors of the economy.

The catalogue of interim measures include the provision of lines of credit for strategic imports; use of letters of credit for high-value foreign transactions and the introduction of a statutory reserve requirement to mop up excess liquidity.

Foreign truckers will now be required to purchase fuel in foreign currency.

Finance minister Mthuli Ncube, who issued fiscal measures to support the monetary policy, also announced an increase in mobile money transfer tax to two cents per dollar from five cents per transaction with effect from yesterday.

The tax applies to transactions conducted via RTGS, mobile phones and the internet.

“Treasury introduced the intermediated money transfer tax with effect from January 1, 2003 through the Finance Act 15 of 2002. The tax was set at five cents per transaction, which was a specific tax,” Ncube said.

“The information that we have so far is that in 2018, 1,7 billion transactions went through as compared to 50 million four years ago. I, hereby, review the intermediated money transfer tax from five cents per transaction to two cents per dollar transacted, effective October 1, 2018 (yesterday).

“I am, therefore, directing financial institutions, banks and Zimra [Zimbabwe Revenue Authority], working together with telecommunication companies, to extend the collection to all electronic financial transactions.”

Government is currently working on a statutory instrument, which will give legal effect to the tax adjustment and provide more details about the measures.

Units less than a dollar will be excluded from the tax.

For example, only the first two dollars of a money transfer transaction of $2,20 will be taxed.

Ncube said the tax review has been prompted by revenue considerations following the mobile money explosion that has taken place since 2016 when the RBZ launched a campaign for a cashless economy.

In the first eight months to August 31, a total of 1,7 billion transactions were recorded, according to Ncube.