Home Sports Zimbabwe netball: After a breakthrough World Cup – what happens next?
SportsZimbabwe 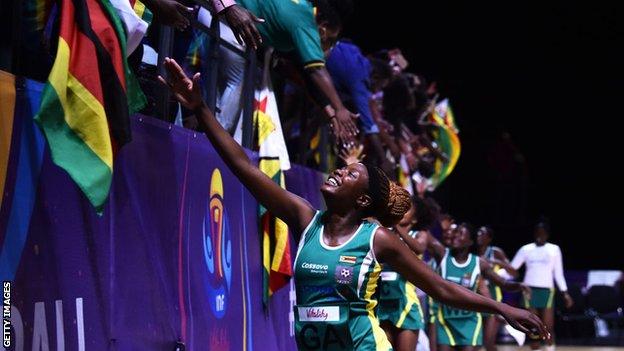 They were the team that gatecrashed the World Cup.

On the court they impressed crowds with their flair, and off it they charmed them with their charisma – memorably dancing their way on to the BBC’s television coverage.

Zimbabwe’s Gems went into their first Netball World Cup ranked 13th – but at one stage it was not certain they would even be able to compete in Liverpool. They trained without appropriate equipment or facilities and lacked the financial backing they desperately needed to make the trip.

But compete they did – finishing eighth, winning an unprecedented three matches.

So, having established themselves on the world stage, what does the future hold for netball in Zimbabwe?

‘At school in Zimbabwe, we play in sand’

Before the World Cup started, some of Zimbabwe’s players had not even played on a proper netball court.

Goal shooter Joice Takaidza, who now lives in Australia, says the facilities in her homeland are “the worst to train on”.

“At school we play in sand and when you finish playing the dust will be in your neck,” she tells BBC World Service’s Sportshour programme.

“In the Premier League we play on concrete grounds, which are very hard and very dangerous too because they damage your knees.”

Funding is the main problem – as is the case in many Zimbabwean sports.

As government minister Kirsty Coventry, an Olympic swimming gold medallist in 2004 and 2008, explains: “Two months before the tournament, the Zimbabwe Netball Association hadn’t raised the money that they had wanted to.

“We provided a lot of support for them to be there.”

Other funding appeals raised just £250 – a drop in the ocean for the likes of England and Australia – but it made a significant difference to Zimbabwe.

Yet the issues did not end there.

When the team finally arrived in the UK, head coach Lloyd Makunde had to head into Liverpool and spend £30 of his own money on key equipment including cones and balls.

“We faced many challenges,” says Makunde.

“We saw teams like Australia, New Zealand, Jamaica when they were warming up, and we actually didn’t have the equipment when we were doing the training.”

So what happens next?

Victories over established netball nations such as Northern Ireland, Barbados and Sri Lanka at the World Cup showed the potential for further success in Zimbabwe.

But where will the support they need come from?

England goalkeeper Geva Mentor is among those trying to help.

Since seeing the disparity between teams at the 2015 World Cup in Sydney, Mentor has gathered kit and equipment to send to less established netball nations.

“The talent is there,” she says. “It’s just trying to tap into that and make sure they know what they’ve got and they’ve got the support around them for each of these girls to be able to flourish.

“One of the hardest bits is actually finding people on the ground to distribute the kit and get it out into the rural communities where people actually need it.”

Coventry – the minister for youth, sport arts and recreation – acknowledges the Zimbabwean government has to put “different structures” in place in sport, but says there are bigger priorities in the country.

“We are going through a tough time and there are things within the country, within the economy, like medicines for people, like education for people… and sport is not up in that area as of right now.

“So for me to sit here and say we would love to build netball courts and soccer fields and swimming… it’s completely unrealistic and I would be letting down hundreds and thousands of athletes down.”

Coventry is looking to collaborate with sports associations and public partnerships to drive an improvement in facilities.

“I think the athletes are proving that we have enormous talent and that’s not going away,” she says.

“So it is up to us to put into place the different structures that will allow for sports to be professional.”-bbc