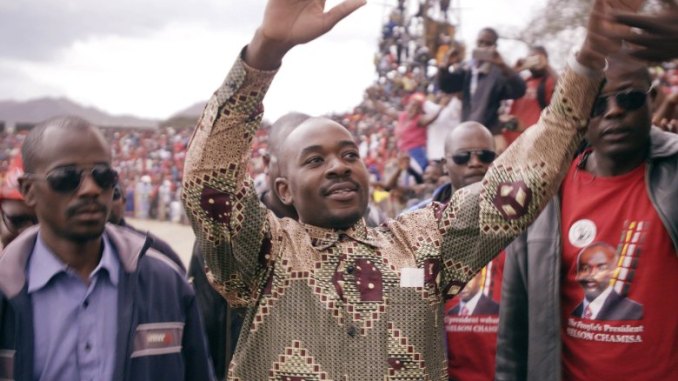 OPPOSITION MDC Alliance president Nelson Chamisa is the central figure in “President”, a new documentary that centres on the 2018 presidential election in Zimbabwe, the first election following the removal of Robert Mugabe by his own military chiefs.

“President” is directed by Danish/American filmmaker Camilla Nielsson and is her second feature documentary set amidst the intense political and social climate in Zimbabwe.

The film has been selected to premiere in Sundance’s World Cinema Documentary competition this Friday, 29 January. It follows on from Nielsson’s 2014 movie Democrats, which did the festival circuit in 2014-15. That film was banned in Zimbabwe by Mugabe for two years before a legal battle overturned that decision.

“President” begins with a dramatic change of guard in both Zimbabwe’s main political parties, following the 2017 coup that saw veteran political grandmaster Robert Mugabe ousted by his own party, and replaced with his former vice Emmerson Mnangagwa.

Less than three months later, Tsvangirai’s untimely death from cancer sees 40-year-old lawyer and activist Nelson Chamisa take over as MDC chief. With the next general election already set for that July, it’s a baptism of fire for the charismatic young Turk, who nonetheless brashly sets out his plan to break ZANU-PF’s stranglehold on power: “He wants to rule us with his walking stick?” he says of Mnangagwa, to whoops of approval at an early electoral rally.

But Nielsson has a slower burn in mind as she follows Chamisa in the run-up to the election. She decides to opt out of covering internal rivalries within the MDC following the premature death from cancer of Tsvangirai.

In the documentary, after a military-backed coup of Mugabe, his former Vice President and successor President E.D. Mnangagwa is running for reelection against an upstart challenger, the young MDC (Movement for Democratic Change) leader Nelson Chamisa.

Camilla Nielsson’s “President” retells the battle for the soul of a nation through the prism of Zimbabwe’s controversial 2018 presidential election.

Nielsson immersed herself in Chamisa’s camp, four weeks prior to the contest, to juxtapose Chamisa’s passionate campaign from his larger, richer rivals. For decades under President Mugabe, the country held rigged election after rigged election.

Now, the younger generation, which includes the 40-year old Chamisa, believe this is their opportunity to reshape the nation. In fact, the candidate makes several references to “the Obama effect” to describe how they should campaign. And when one sees his fervent rallies, where he plays the raucous rally with a maestro’s precision, the comparison seems apt.

But problems abound: The MDC hold significantly less money than President Zanu’s PF party, as evident by Mnangagwa’s building-sized pristine billboards. The ruling party also controls the police and military. They use the food aid provided by the UN as means to buy people’s votes. Most of all, they command those tasked with overseeing the contest—the Zimbabwe Election Commission.

MDC brass believe they have the lion’s share of public support; they also know that won’t necessarily translate to the official vote count, in a country that has previously been plagued by allegations of electoral fraud and rigging by the ruling party.

When the enrapturing images of the inspired multitudes jubilantly supporting Chamisa fade into election night, these factors collide for a damning combustion. Ballot stuffing. Voter data manipulation. Fabrication of polling stations. The police deployed in riot gear dispensing live ammunition. The eviction of journalists from press conferences. These are the levers of unprincipled power employed by Mnangagwa. Chamisa, his deputies, and supporters—ignoring death threats and the real chance of violent political retribution—fight to the country’s supreme court to prove the justness of their cause, only to see justice denied.

Moreover, the opposition has a tetchy relationship with the supposedly impartial Zimbabwean Electoral Commission, responsible for carrying out the election and delivering the result. The filmmakers sit in on fraught conciliatory conferences between ZEC and party officials, which make for some of the film’s tensest, wittiest material as accusations of unfairness are volleyed back and forth: Rather like Frederick Wiseman, Nielsson has a knack for excavating savage drama from administrative process and politesse.

Away from airless meeting rooms and onto the sidewalk, a national mood of hostility is more pronounced. MDC supporters claim they’re being abused and intimidated by the authorities — as aggressive an election-stealing tactic as any possible number-fudging — though as one rally attendee remarks, not everyone can be suppressed into submission when they’re already failed by the system. “Whether we’re beaten up or we die of hunger, we’re dead anyway,” she shrugs.

These words rather haunt the film when a horrifying climax is reached — and filmed, with astonishing in-the-moment access — in the days immediately following the election. As ZEC inexplicably delays the announcement of the results, to the consternation of the MDC and a restless public, mass protests are met with military fire, leaving six dead and many others wounded; who ordered this rash action is a question that Mnangagwa coyly sidesteps. The more the process is protracted, meanwhile, the more heavily the beleaguered, death-threatened Chamisa’s earlier words weigh on him: “If we miss this opportunity, we are doomed for life.”

“President” offers riveting witness and an epic reminder that democracy won’t happen if the people don’t fight to create it. The film is of staggering global relevance to all who envision a more just, egalitarian future.

Mugabe, who ruled the country with an iron and corrupt hand for 37 years, makes an unexpected appearance in President with his own axe to grind. Emmerson ‘The Crocodile” Mnangagwa, the current ruler who usurped Mugabe and was his right-hand man for all of that time, isn’t about to let go of the ZANU-PF party’s grip on the country or its bag of dirty tricks either. The abuse of power is all so deep-seated here that the government feels entirely enabled to send in riot police to break up an MDC press conference in front of the world’s assembled media at the drop of a hat – and then change its mind mid-swinging-baton. It’s clear that Nielsson wants to remind viewers that this is where assaults on democratic institutions end up.

Chamisa is a 40-year-old lawyer who has sworn to fight to the death for democracy, and he doesn’t seem to fit the coat he’s wearing, never mind the role he has – president of the MDC – or wants to win. Nielsson’s camera watches him grow in stature as the crowds come out to surround him; he begins to come alive onstage and the oppressed people of Zimbabwe, all decked out in the MDC’s signature red colour, respond.

Lofty declarations of intent on the part of the country’s rulers and the arrival of international observers can do little to shake up an electoral system which has been so corrupted, however. Food handouts at election rallies to a starving populace are hard to resist.

With standards so low, a complete overhaul is needed, and it’s not about to arrive via the Zimbabwe Electoral Commission (ZEC), one of the villains of the piece. Mnangagwa appoints Priscilla Chigumba to head the government-run body, and Nielsson’s camera presents her as a silent Maleficent-like presence, her face surrounded elaborate coifs as the ZEC presents its version of a “free, fair and credible” vote with a stony-faced brazenness that would challenge any Disney villain. It’s also clear that Mnangagwa literally doesn’t know what the word “transparent” means.

Camilla Nielsson was a Fulbright Scholar at Tisch School of the Arts, New York University (NYU), and in the Dept. of Anthropology (NYU), where she studied documentary filmmaking and visual anthropology from 1997-2000. She directed the documentary short trilogy Good Morning Afghanistan (2003), Durga (2004), and The Children of Darfur (2005), about children’s rights, and Mumbai Disconnected (2009), in the Cities on Speed series.

Since 2007, she has collaborated with Israeli video artist Yael Bartana on the trilogy We Will Be Strong in Our Weakness (Berlinale 2011, Venice Biennale 2011), and Demonstrators(2011), for the exhibition Re:Constructed Landscapes (Danish National Gallery / SMK). She is currently artistic advisor for Yael Bartana’s What if Women Ruled the World opening at Manchester International Festival in July 2017, and Aarhus Kulturby in November 2017.  Camilla Nielsson’s first feature documentary Democrats (2014) has screened at more than 80 film festivals, and won 20 awards and nominations – including Best Documentary at Tribeca Film Festival 2015, and Best Documentary at Nordic Panorama 2015. –