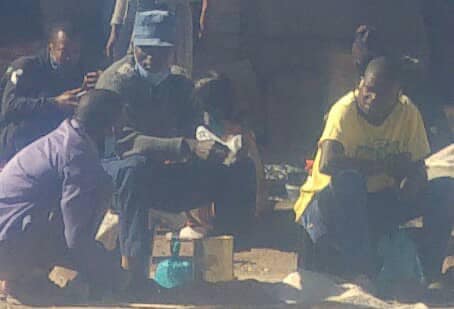 A member of the Zimbabwe Republic Police (ZRP doubles as a street vendor as the economic hardships hit the southern African nation.

Images trending online shows a police officer dressed in work uniform selling fruits and vegetables in Harare streets presumably to supplement the paltry salary they receive from the state.

The lowest paid constabularies in Zimbabwe are paid just over 3,200 dollars (US$49) per month.

One social media analyst said “It was never supposed to get to this tragic and deplorable point for officers in uniform. But they too have families to feed!”

Journalist Hopewell Chin’ono who has been leading calls for political reforms in Zimbabwe and exposing government corruption said “This is a sign of the tough times we are living in under this clueless and corrupt regime.‬A policeman reduced to vending, tragic and a reflection of a broken society!‬It was NEVER supposed to get to this tragic and deplorable point for officers in uniform”.‬

The government of Zimbabwe does not allow police officers to wear uniform when conducting private business. The actors, Samantha ‘Gonyeti’ Kureya and Sharon ‘Maggie’ Chideu, were fined $20 each last year on charges of a criminal nuisance, stemming from a humorous skit in which they play police officers abusing two prisoners. The comedians appeared on set dressed up as police officers.