The pair were expelled from the party in December and February for allegedly supporting a plot against him.

Rugare Gumbo and Didymus Mutasa have filed papers in the High Court of Zimbabwe seeking an order to reinstate them into Zanu-PF.

Mr Gumbo told the BBC that President Mugabe was a “dictator” and that he should step down.

In an unprecedented move, they are seeking that the court also strike down reforms that President Mugabe brought in at the party conference last December.

If successful, the president’s two former stalwarts would call for an extraordinary congress of the party where a new leader could be elected to replace the 91 year old.

Speaking to the BBC’s Brian Hungwe, Mr Gumbo, a former Zanu-PF spokesman, said he might set up his own political party if the court challenge failed.

Even if the pair do win back their places, Mr Gumbo says it would be impossible to work with President Mugabe,

“There is no basis of working with him, he is a dictator. He tells you what to do, if you don’t then he fires you. So how can I work with a man like that?” he told the BBC

The former party spokesman does not believe that President Mugabe is fully in control of his party and that the president’s wife, Grace Mugabe, is now “running the show”.

Last week, Mr Mugabe denied such claims, saying his wife was not the “power behind my throne”. 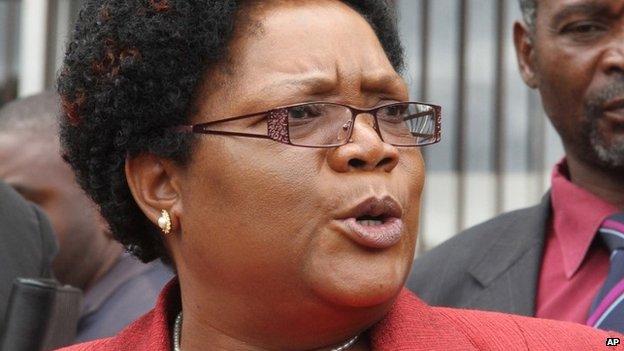 President Mugabe accused Joice Mujuru of plotting to assassinate him.

Mr Gumbo and Mr Mutasa, former party secretary general, were dismissed as part of a cull of senior officials accused of supporting an alleged bid by former Vice-President Joice Mujuru to remove Mr Mugabe from power.

Mrs Mujuru, who had been tipped as Mugabe’s successor, was dismissed for allegedly plotting to assassinate the president and to contest against him at the December congress. She has denied these accusations and has not been charged.