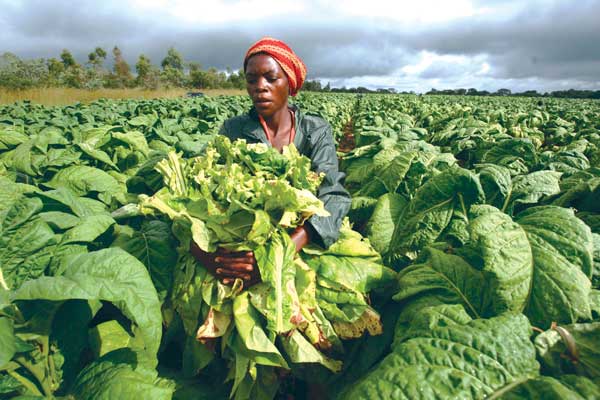 FOLLOWING the introduction of a forex auction system this week on Tuesday by the Reserve Bank of Zimbabwe (RBZ), tobacco farmers are outraged by the prevailing rate, which is below the parallel market and are demanding 100% payment in forex.

Farmers are bitter about the losses they incurred when they sold their crop at US$1: ZW$25 before the central bank introduced the forex auction system on Tuesday which put the rate at US$1:ZW$57.

The Tobacco Farmers Union of Zimbabwe (TFUZ) said the forex auction system rate is lagging far behind the parallel market rates, which are causing the sky rocketing prices of basic commodities.

“The forex auction rate will always be below the parallel market rate, therefore this means continued suffering of tobacco farmers. The government should not auction our US dollars to a market that only the rich have access to and at the end of the day come up with an averaged rate for farmers,” TFUZ said in a statement.

The tobacco farmers’ representative body said the forex auction system is not meant to benefit the poor small-scale tobacco farmers saying it came at a time 80% had already sold their crop.

“Most of the small scale tobacco farmers in communal areas have already sold more than 80% of their tobacco, because they cannot hold it for long due to pressure from contracting companies and the need for money to pay labour, buy food and other necessities as tobacco farming is their only source of income,” TFUZ said in its statement.

TFUZ expressed concern at how tobacco farming is benefitting “vultures” in the market while impoverishing the already poor farmers struggling to keep afloat amid skyrocketing prices of basic goods and runaway inflation.

“These farmers have already lost their gains and profits and these have already been eaten away by vultures in the market. Many can celebrate the claimed increase in the exchange rate, but this will not change our situation as tobacco farmers as basic commodities and farming inputs continue to be charged using the parallel market exchange rate which is trading at US$1- 100 RTGS,” it said.

According to the central bank, farmers are entitled to 50% of earnings in forex and the remainder is indexed using the prevailing exchange rate.
Already the selling season which commenced late due to Covid-19 is at its peak with over 100 million kg having being sold.
Government expects slightly above 200 million kg at the end of the season.

“Tobacco farmers are being exploited and are working for the benefit of the state and tobacco companies. This government has turned its back on tobacco farmers, they are doing nothing to promote the continued production of tobacco,” TFUZ said.

“This situation will worsen the suffering of farmers, dumping them into poverty and hunger, and will see a decrease in tobacco production. Most farmers in communal areas depend on tobacco farming as a source of income and they are disappointed by the payment system which was used this season. This will affect household food security and lead to school drop-outs as most farmers will be left with nothing. We demand 100% forex for our tobacco payments, this forex auction system is not meant to benefit us.”