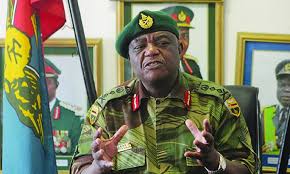 ACTING President Constantino Chiwenga is itching for a showdown with estranged wife, Marry Mubaiwa, in court on Monday and has rejected an out-of-court settlement following a nasty fallout with the former model.

Chiwenga’s lawyer Wellington Pasipanodya told NewsDay yesterday that he was also displeased with the manner in which Marry’s legal team was handling the case, insisting that there were no moves from his client to have an out-of-court settlement.

The two are embroiled in nasty divorce proceedings amid a serious fight over custody of their children, while Chiwenga also accuses his wife of trying to kill him.

There have been accusations and counter accusations from both camps of drug abuse and engaging in rituals, among other issues.

Pasipanodya said he could not comment on the merits of the matter since it was still before the court, but said there was no agreement for an out-of-court settlement.

“The matter is sub judice (before the courts). Contrary to the public media, I have not received any instructions from my client for an out-of-court settlement. I do not know where that is coming from. My client did not concede to anything and the matter will proceed tomorrow (today) as scheduled in court,” Pasipanodya, who is instructing Advocate Lewis Uriri in representing Chiwenga, said.

data-full-width="">
On Friday last week, Marry, who was in the company of her lawyer Advocate Taona Nyamakura, appeared before Justice Christopher Dube-Banda at the High Court and the matter was not deliberated on and the hearing deferred.

However, soon after the deferment of the matter, Nyamakura told journalist that: “The matter has been deferred to Tuesday January 21, for possible argument or confirmation of settlement. We exchanged positions as legal practitioners acting for both sides in the matter and the tentative position is that this is a matter that we both agreed should be settled and not argued.

“It will be in the best interest of the children that the parties find each other and that the law is followed. But it’s a tentative position, if we cannot reach a settlement by Monday, then it means we proceed with oral argument on Tuesday as directed by the judge.”

Pasipanodya’s position, however, is an indication that perhaps the parties failed to find common ground and, as such, the matter will be determined by Justice Dube-Banda.

The acrimony between Chiwenga and Marry came into public domain in December last year when the former filed for divorce soon after coming back from China, where he had been receiving treatment.

Marry was arrested on December 14 last year on charges of externalising foreign currency and attempting to kill the former army boss.

While Marry was in remand prison, Chiwenga took custody of the couple’s children and also took charge of the pair’s Harare matrimonial home, Number 614 Nick Price Drive, Borrowdale, prompting his wife to file for an urgent chamber application seeking the return of the children and access to the house where she had been barred by her husband.

Early last week, Chiwenga openly accused Marry of having caused his illness and also attempted to end his life in a bid to take over his vast wealth.

He also accused her of being a drug addict, who is in the habit of consulting witchdoctors, adding she sprayed his clothes with unknown substances, all in a bid to kill him.

Chiwenga also accused Marry of working in cahoots with his enemies who are based outside Zimbabwe with a view to tarnish his image.

However, in response to the accusations by her husband, the former top model hit back and revealed that the collapse of the couple’s nine-year customary marriage was brought about by Chiwenga’s alleged paranoia, poor health and the influence of “heavy doses of drugs”.

Marry also said her husband harboured an ambition to take over the presidency.

Ironically, in his response to Marry’s urgent application for custody, Chiwenga accused his wife of being a bad parent, which she dismissed, saying she was a better, healthy parent as opposed to the “sickly” Vice-President.

Turning to the issue of the couple’s assets, Marry claimed that Chiwenga had all his assets registered in his relatives’ names in an effort to avoid sanctions that were imposed on him by the United States government.

Marry further dismissed claims that her marriage with Chiwenga was over, saying she was claiming the equivalent of US$40 000 per month as maintenance for her upkeep and a total of US$7 500 per month for her three children, which money she said should be paid at the interbank rate.

Besides the claim of monthly maintenance, Marry also said her husband should be ordered to pay for the family’s holidays, school and medical expenses and casual clothes, all running into thousands of United States