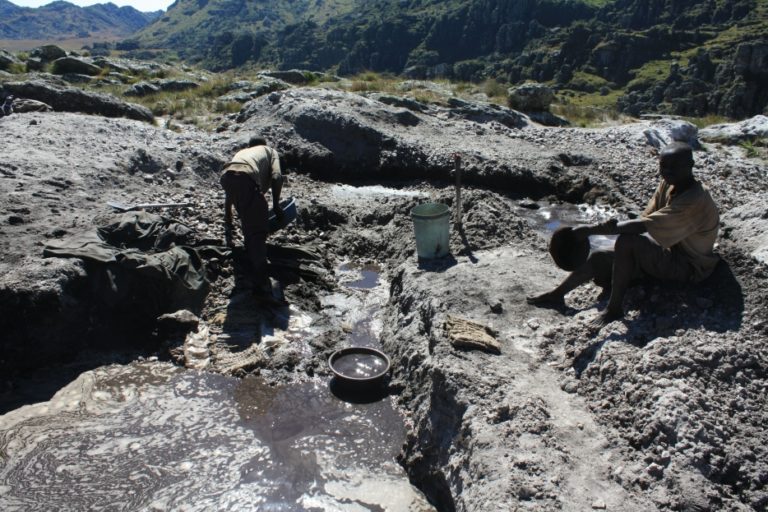 The rickety yellow Toyota van screeched to a stop. The driver, Collen Sibanda, a dreadlocked, soft spoken man in his mid-thirties, announced, “Gentleman and Lady, this is it. My vehicle cannot go beyond the river.”

The expansive Haroni River (translated in Shona as a hiding place) still beckoned to us. This river separates the village town from a mountain range, but there was no bridge in sight. The only hopes for crossing the river were carefully laid boulders in the river-bed. All that we needed was a 4×4 vehicle, gritted teeth and great determination to get to the other side of the river. Except we had no vehicle now.

An aura of despair and hopelessness hung over the place. Sibanda told us that when Cyclone Idai hit the area two years ago, the 50m [50-yards] long suspended Haroni Bridge was swept away by the floods. Not even a single piece of debris of the bridge was found.  Built in the 1960s, the bridge was a link between Chikukwa village, Chimanimani National Park and Chimanimani village town, in the eastern districts of Zimbabwe.

Sibanda prophesized that it might take decades before another bridge is constructed. We had no choice but to walk.

For the next 3 hours, my guide and I trekked over 23 kilometers [14 miles] on a dusty road that snaked through a dense thicket of yellowwood and cedar trees. Finally, a mountain clearing came into view leading us to a base camp for park rangers overlooking a beautiful green valley.

In the months before my visit to this site, the coronavirus lockdown enabled hundreds of illegal gold diggers to swarm into the mountains of Chimanimani to tunnel their way to gold. They vandalized traditional sites held sacred by local people, dug deep into the mountains, and hassled tourists who ventured into the park, despite weapons being wantonly fired by rival digging groups. These marauders turned the river brown with tailings from their gold digging, harming the ecosystem that sustains human life in two countries, Zimbabwe and Mozambique.

Even on the day we visited Chimanimani mountain,  freshly dug exploration pits were visible. The park ranger who accompanied us had no Zimparks uniform but wore a threadbare brown shirt, blue trousers and black boots. We couldn’t help but notice that he was also sporting an AK47 rifle. The only identifiable item on him was his cap, inscribed with the words, Zimbabwe Wildlife and Parks Authority (Zimparks).  He fretted over the sight of freshly dug pits. When we asked him how digging could be happening in the presence of parks security, he seemed reluctant to answer.

Zimbabwe Parks officials have been accused of succumbing to coercion and bribery from powerful politicians and mining cartels, with villagers living nearby the park suggesting parks officials act as the paymasters to the diggers. Although the digging activities are said to have started 14 years ago, they got out of hand during the outbreak of the COVID-19, which began in Zimbabwe in March, 2020, violating the country’s laws.

“We are almost at our last stand,” laments Jane High, Chairperson of Chimanimani Tourism Association (CTA), who I interviewed after returning to the base camp. “The mining is destroying our most accessible “Day Hike places” and they have taken control of the tourism sector by damaging the most visited parts of the park.”

“They are destroying everything,” echoed Sibanda. His homestead was burned and destroyed because he backed the arrests of miners and supported the preservation of mountains in the region. He was forced to flee and live with well-wishers in Chimanimani village town, while fellow local guides have been harassed and harangued now and again by some local park officials, rangers and the illegal miners.

Sibanda, who is the lead guide of Chimanimani tour guides and also a member of CTA, has faced threats for uncovering mining activities in the park. A brief visit with him around Chimanimani village revealed that some of the gold diggers who are still lurking in the town dislike his approach to environmental protection. One remarked in my presence, “When the lockdown returns again, you won’t stop us from getting into mountains.” The lockdown was reinforced in January, 2021, and is still in force.

A formal censure has been issued by the country’s Environmental Management Agency office against park officials over the handling of illegal mining issues.  An area manager in the village town of Chimanimani Prosper Kanyepa told me that parks officials were held responsible; by edict in the month of November 2020, they were to restore the damaged areas in the park in 30 days.

But that did little to pacify community members, environmentalists and conservationists who said their input was necessary to confront the problems in the park and elsewhere as stakeholders. They insisted that public notices be made about the involvement of errant park managers and officials, and that ecological reports should be produced to help with restoration efforts.

For these changes to occur, the stakeholders are pinning their hopes on  Munesushe Munodafawa, the  permanent secretary in the Ministry of Environment, Climate, Tourism and Hospitality Industry. He has pledged to make amendments aligned with their concerns to be added soon to the  Parks and Wildlife Act. The Act compels Zimparks to conserve Zimbabwe’s flora and fauna heritage through an effective, efficient and sustainable use of natural resources.

“The relevant changes are being effected in the Parks and Wildlife Act.” That is all Munodawafa could tell me.

“It is simple politics they play while keeping the mining operations on track.” says tourism official Jane High, who has been instrumental for two decades in organizing a successful cultural and music festival that has attracted thousands of both local and international tourists to Chimanimani village.

Lawyers for conservationists and environmentalists have accused Zimparks of purposely adding mining to Zimbabwe’s 2019-23 strategic plan, which is now being implemented. Many view the mention of mining in the strategic plan as being the cause of the rise of illegal mining in the National Parks areas.

“I am not sure how extensive the problem is in other areas,” says Fiona Lliff, an environmental advocate with the Zimbabwe Lawyers for Human Rights, but she notes that the worst case of mining is taking place in the villages of Hwange, Umfurudzi, and Chimanimani.

She says, “Zimparks needs to remove mining from the strategic plan, and parliament needs to amend the Parks and Wildlife Act as well as the Mines and Minerals Act [that deals specifically with mining] to specifically prohibit mining in parks.”

Lliff charges that mining has a direct negative impact on the natural biodiversity of the park by removing flora and soils, while adding noise, air and water pollution to the region, driving away animals and insects. Miners, she adds, often illegally hunt game for food. Meanwhile, mercury pollution of water from alluvial mining has had a serious impact on citizens and animal health.

Advocates 4Earth, an NGO that advocates for better conservation and preservation of natural resources in the country, argues that conservation authorities should not be involved in mining in national parks.  It is clear from the laws that parks are established mainly to preserve and protect the natural landscape and scenery and to preserve and protect wildlife and plant communities, explains Lenin Chisaira, the director of Advocates 4Earth.

The mining sector is currently riddled with its own challenges, observes Julia Pierini of Birdlife Zimbabwe. Mining in national parks, she says, will only exacerbate the sector’s internal problems of incompetence, lack of transparency and accountability, and inadequate decision making based on poor quality reports. An additional negative influence is that of Chinese mining companies being granted special presidential concessions to mine in the country’s conservation areas.

Riddled with financial fragility due to corruption, a legacy of mismanagement and a high debt load, Zimparks has been facing many challenges that includes illegal wildlife trade and trafficking, sophisticated poaching syndicates, and serious security, economic and political pressure from the ruling elites in the ZANU-PF party led government.

Hwange National Park, Zimbabwe’s biggest game reserve and a habitat of 45 000 elephants and home to endangered rhino species, in November 2020 suffered from a sanctioned special presidential concession allowing the Chinese to dig coal. “This is yet another factor that has spurred illegal mining in the national parks.” Says Chisaira.

Chimanimani National Park, located in the eastern districts part of Zimbabwe, was set up as a protected reserve in 1960. It includes the second highest plateau in Zimbabwe after Mount Nyanga, with peaks reaching 2,440m [1.5 miles] in height, dropping to 320m in deep gorges and river valleys, stretching for fifty kilometers. The mountains are only accessible through a series of footpaths, and although the park provides only basic facilities, the breathtaking beauty and untouched environment of Chimanimani Mountains make this a popular destination for hiking, rock climbing, camping and birding. Recognition of the endemic plants and reptilian fauna was upheld by Zimbabwe’s first president Robert Mugabe and was subsequently left untampered as with other 6 national parks of note in the country.

Travel and tourism in Zimbabwe contribute US $1.5 billion to Zimbabwe’s economy, adding 8 percent to the Gross Domestic Product. According to the Zimbabwe Travel Authority, the United States, the United Kingdom, Germany, Benulax, South Korea and China are the top countries providing tourists to this destination.

The corrective measures outlined above can save the country’s rich biodiversity of more than 5930 vascular plants species (of which 214 are endemic, i.e. only found in the country), over 670 bird species, 270 mammal species, more than 250 known reptiles, and about 151 fish species that have become extinct elsewhere in the world. People like Sibanda hope to see the country return as a prime tourist destination.

Like the situation of the swept-away Haroni Bridge, Sibanda reflects, “You never know when these issues are going to be resolved.”Stephen Tsoroti is a journalist from Harare, Zimbabwe, reporting on health, human rights, environment and other social justice concerns.