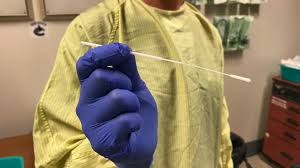 A RUSAPE man died early this week after a swab inserted in his nostrils as part of a Covid-19 test got stuck inside and was rushed to theatre for an operation which saw him fail to regain consciousness.

He is said to have complained of fatigue and chills in his legs and hands leading to a decision to get a Covid-19 test at Rusape General Hospital.

Mapiye’s family is are now demanding justice, accusing the hospital of negligence.

Bezel Rusere, a brother to the deceased, said they never expected Mapiye’s death since his condition was not serious when he went to hospital.

He alleged that clinical negligence may have caused his brother’s death.

“He was a victim of negligence. There is nothing more painful than losing someone young and dear to the heart in this manner. The family is drowned in a torrent of agonising pain.

“My brother just wanted to have a Covid-19 test. His condition was not serious. When they performed a Covid-19 test on him, a swab remained in his nose and a decision was made to perform an operation to remove it with the consent of his wife.

“An anaesthetic injection was administered on him as part of the procedure, and we suspect he passed on during the process.

“The doctor left the patient in the theatre and went out to attend to other errands. He only returned after some nurses had raised alarm. When we tried to engage the doctor on what had happened, he was non-committal.

“He appeared confused. We hold it that Arnold died as a result of his negligence,” said Rusere.

He said an unidentified employee at the hospital posted the sad news in a local WhatsApp group before the deceased’s next of kin had been informed.

“People then started calling to verify the news and it was shocking. I then rushed to the hospital and those who knew me passed their condolences.

“I was shocked and very angry at the same time. It came as a terrible shock and is still hard to grasp. It is unforgivable. The pain is so unbearable and unbelievable,” said Rusere.

Makoni District Medical Officer, Tendai Nyafesa was contacted on the issue and confirmed that something of that nature had transpired at the hospital and that investigations were in progress.

“I can confirm that we had a table death of that nature. I cannot say much since the matter is still under investigation. Those who were handling the patient have been asked to submit reports detailing what really transpired and led to the death of the patient. I should have the full facts by next week.

Dr Nyafesa said their main aim is to make the hospital wards places of healing and caring, where pain and distress can be eased by caring professionals.

He said patients should not shun the hospital as a result of the incident, especially in this era of coronavirus which requires swift medical attention and care.