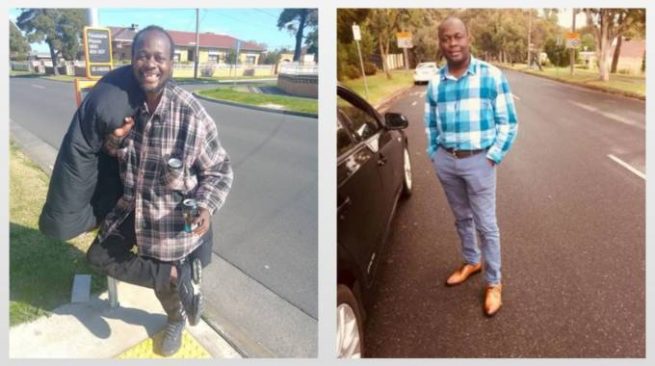 Popularly known as Mukoma Masimba, real name Ridout Simba Chairuka the socialite is now homeless and has turned to commercial sex work for a living.

He was known for flaunting his wealth and living in the fast lane.

Speculation was rife that Sekuru Banda was the architect of his misfortune, a claim he vehemently denied.

This ‘conspiracy theory’ was given rise by the previous public rant that Mukoma Masimba aimed at the traditional healer.

“Many people believed that I was bewitched by Sekuru Banda which was not true and I was a called as someone with mental illness but I was tested all that,” Masimba said.

Masimba is staying in the streets of Melbourne and specialists said his mental health was safe and sound.

In his new commercial sex trade, Masimba has undergone some training to satisfy clients.

In some explicit videos he is being taught how to treat male and female clients.

He lamented neglect by the Australian authorities and called upon the intervention.

“I have been staying in the streets for a year and the authorities here have not helped me to get a proper place to stay.

“And now I have resorted to commercial sex working to make ends meet.

“I am on my way to satisfy a client, it’s not by choice or optional but circumstances beyond my control have forced me to do this.

“I have no other ways of making money since some drug addicts are stealing my medication.

“The authorities here ill-treated me, and I have since made a complainant which I believe should be heard back home.

“Remember last year I went into the streets before the outbreak of Covid-19.

“I am okay but the authorities here exposed my HIV status and no one wants to be associated with me now.

“I was forced to reveal my status after some drug addicts here were stealing my pills and I had to confess so that they could not continue stealing but I put the blame on the authorities here.

“And now I have shifted focus so that I can manage to survive from pr0stitution.

“I am angry with the Australian Government, they have violated my privacy and now most homeless people in Melbourne now knows l am HIV+ because l have been homeless for one year.

“So I am appealing to the authorities back home to take note of my issue. “Australia imposed sanctions on my country and they should remove them, our President is a listening man,” he said.