Company registration in Zimbabwe or applying for requisite licences to carry out business in industries like mining or farming is hardly easy – anyone who’s been through the processes will admit to that. in fact, it’s these same challenges that also push some entrepreneurs into informal trade. The good news, though, is that now you can do it online.

Earlier today we came across an advert promoting the online registration of liquor licences which led us to a State e-services website called ZimConnect. This is a Ministry of ICT online service that was launched this year to provide people with an online alternative for accessing some State services.

The name ZimConnect isn’t new to Zimbabwean technology, though. It was mentioned a lot around 2012 during Nelson Chamisa’s stint as the Minister of ICT when it was crafted and finalised as the country’s e-Government  framework.

It was also referenced recently in the 2016 National Budget Statement addressmade by the Minister of Finance where it was highlighted as a programme that would facilitate the launch of online government services – something that would hopefully reduce red tape and reign in corruption that comes with traditional service provision.

The site, which is fairly simple to use, offers a number of services which include visa applications, company registration, corporate name change, deeds search, the processing of investment and mining licences as well as the licensing for local government services like operating a liquor store. 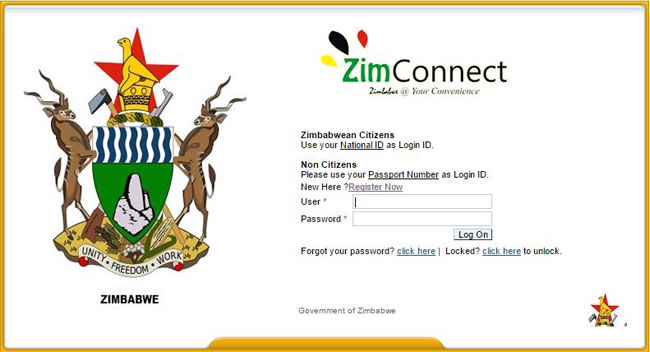 To access these services you need to create an account which will also allow you to view the progress on any of the applications made. The payment for any of the applications can also be made electronically and the site uses Paynow as its aggregator, something that conveniently brings mobile money payments onboard and opens it up to the unbanked.

What we couldn’t determine straight away, though, was how long the processing of any of these applications would take. While there’s a lot of transparency introduced through online processes and transactions, there’s no telling how many hands (or workstations) an application has to pass before it’s completed.

Other than that, ZimConnect appears to be a convenient tool for anyone who doesn’t want to go through the hassles that come with government services applications. More importantly, this tool could if harnessed effectively, actually bring about a faster management of early stage business formalisation for potential investors and local entrepreneurs.

The frustrations that come with those processes might have pushed away people who are keen in setting up a business, but hopefully an easier way of doing things, coupled with an online national tax management system, will help improve the ease of doing business in Zimbabwe.-TechZim