VIOLENT clashes are likely to break out in Harare tomorrow after Zanu PF youth threatened to take to the streets on the same day to counter an MDC Alliance planned demonstration to demand electoral reforms ahead of next month’s polls. 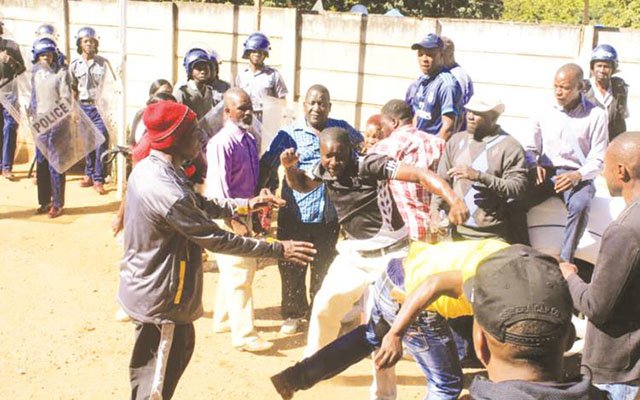 MDC Alliance leader and presidential candidate, Nelson Chamisa announced last Friday that they were going ahead of their planned demonstration after President Emmerson Mnangagwa “rushed” to proclaim election dates before the implementation of the reforms.

In a counter move, Zanu PF Harare youth leader, Godwin Gomwe yesterday said they had mobilised ruling party activists for a solidarity march for Mnangagwa at the same time the opposition would be having theirs.

“All members of the youth league from all levels are invited to attend a march in solidarity with President ED Mnangagwa’s call for peaceful election elections and no to violence. We are the vanguard of the party, so we are 100% behind our President,” a statement read.

“Ours is not a demonstration, we don’t demonstrate we are doing a solidarity march, it was in the pipeline for some time and it’s not meant to clash or cause violence,” Gomwe said.

But MDC-T youth assembly leader, Happymore Chidziva, said they were unmoved by Zanu PF’s counter move, which he said was meant to trigger violent clashes.

“This is an act of desperation by a regime that thrives on violence and inducing fear on the people of Zimbabwe, we are not going to be deterred by people, who have no respect for constitutional rights. We can only hope that these so-called Zanu PF youth won’t be State security agents dressed in civilian clothes bent on causing violence and instability. We will proceed with our march,” he said.

Chidziva said they had lined up a number of demonstrations to make the country ungovernable until the Zimbabwe Electoral Commission (Zec) has reformed the electoral roadmap.

“If Zec and the government fail to allow us reforms, we will make the nation ungovernable.”

Some of the opposition demands include equal access to State media and transparency in the printing and security of voting material.

Chamisa and Mnangagwa are touted, as front runners in the race, although the country has over 130 political, which have registered to contest the polls.-Newsday