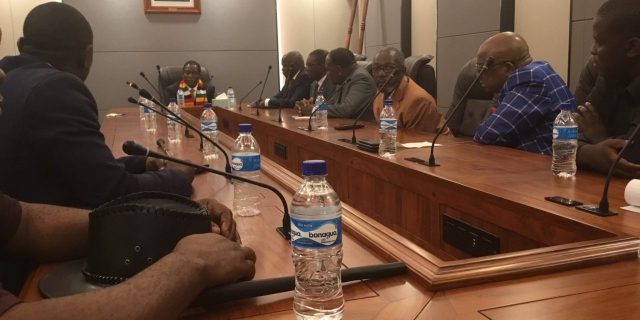 THE remains of former President Robert Mugabe will now be buried in Zvimba tomorrow at the insistence of his family, though Government had started working on the mausoleum it had demanded earlier.

“Yes, it is true, the former President will be buried in Zvimba on Saturday (tomorrow). I will let you know once I have the programme,” said Mr Mugabe

Asked what would happen to the mausoleum, Mr Mugabe said he didn’t know.

Secretary for Information, Publicity and Broadcasting Services Mr Nick Mangwana said Government was committed to respecting the wishes of the deceased’s family.

“The family of the late former President Robert Gabriel Mugabe has expressed its desire to proceed with his burial in Zvimba. In line with Government policy to respect the wishes of families of deceased heroes, Government is cooperating with the Mugabe family in their new position,” he said.

Mr Mangwana said Government will render all the necessary support to give the former President a befitting send-off.

Zanu-PF Mashonaland West Provincial Chairman Cde Ziyambi-Ziyambi said Government had been consistent from the beginning that it would respect the wishes of the family.

“The body of the late Mugabe left Harare for Zvimba, awaiting burial set for Saturday. The family indicated that they are happy with burial at Heroes Acre. We took them to identify the place and we agreed to have the mausoleum constructed. The two children — Chatunga and Robert Jnr — were part of those who went to the site. Today, they indicated that they want to go to Zvimba and Government agreed,” said Cde Ziyambi.

He said the party will be guided by the family programme.

“We await communication from the family on the programme,” said Cde Ziyambi.

However, chiefs from Zvimba yesterday threatened to boycott the burial, insisting the former President will be buried as an ordinary person if buried in Zvimba.

Chief Zvimba – Katiza Gombo – Gibson Jenami said the new arrangement was through the instigation of the family.

“It come as a shock to us. But from the word go there was conflicts between chiefs from Zvimba and his wife, Grace Mugabe,” he said.

It has also been learnt that Mrs Mugabe wanted the remains of her late husband to be interred at their Blue Roof residence but the idea was shot down.