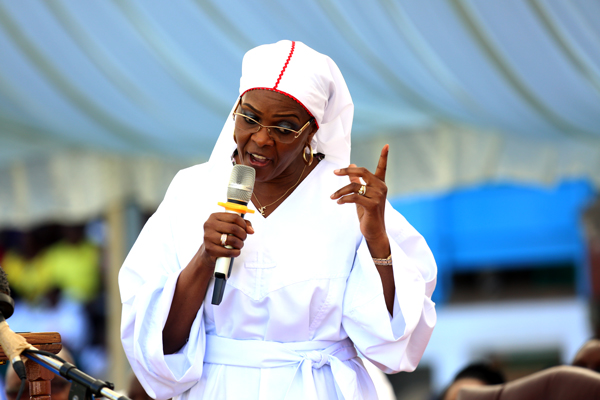 Team Lacoste has decided to go for broke and it is circulating a highly damaging document which seem to portray grace as a woman of disorderly sexual habits… Below is the unedited document: 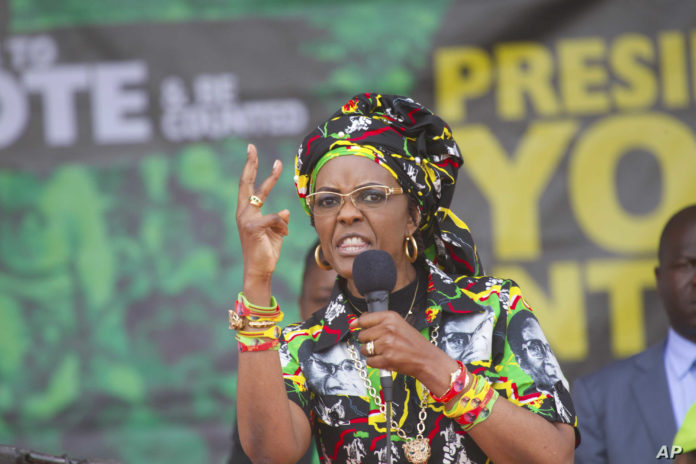 Zimbabwe’s first lady, Grace Mugabe, addresses party supporters at a ZANU PF Rally in Chinhoyi in this Saturday July 29, 2017 photo. Accused of assaulting a woman in a Johannesburg hotel, the wife of Zimbabwean President, Robert Mugabe, is a fiery character with outsized political ambitions who describes herself as the “mother of the nation” and whose scoldings of top figures in her husband’s government earned her the nickname, “Dr Stop It.” (AP Photo/Tsvangirayi Mukwazhi)

Report reproduced as is ”

Reports date back to as far back as 1985 when the then Head of the Presidential security reported that Zim number 2 (meaning Robert Mugabe as he was the prime minister then) was in a relationship with an Air Force official”s wife.

The Head of Presidential security stated that he feared that the husband would eventually know as the wife written name ‘Grace Marufu’ has been going with the Prime Minister on oversees trips and also an incident that happened when she worked late and the Prime Minister had sex with her in the home office a few doors from his wife Sally.

He also wrote that there is need to separate them as even the loyal and respectful Sally might blew the whistle.

In 1986 another security official with a different signature wrote a report about how Grace Marufu had technically moved to her maternal home together with her son whose birth certificate copy named him as Russell Goreraza as he is fighting with her mainly over her neglecting her duties as a wife. In early 1987 she is given a driver who reported to the head of Security that she is seeing a Harare Businessman and how he sometimes sleeps over at her new place.

In August 1987 there is indication that she almost died after aborting a pregnancy that was claimed to have been that of Robert Mugabe that’s according to a debrief of one of her aids at that time.

The written report pointed out that they had gentlemen agreement that he would stay away from her.

The aid reported that Grace went to his house a couple of times soon after the gentlemen agreement.

Mugabe formally get introduced to the family in 1988 and everything is kept hush hush.

Grace fell pregnant with Bona in late 1988 prior to that she made several trips to China and Europe together with the president a source in the close protection team said the President had to be enhanced in order to impregnate the girlfriend.

Mugabe send relatives to pay Lobola with a Matibiri and Sabina leading the delegation, his other brother Donato refused saying he cant betray Sally.

Bona is born in 1989 , Sally heard that the daughter was his husband’s it was the first time she had a row with the husband in front of aids , stormed out of the house and was stopped at the airport by security details wanting to leave for Ghana.

She refuses to go back to the state house and finally went to Zvimba where she was consolled with Donato she stayed for a week and left after she was told that he wanted the kid only and not the wife. Donato gave her a drawn portrait of a monkey that broke the ice she loved monkeys, she returned back to the state house and things were never the same again though Mugabe still showed her affection it wasn’t the same, her medical problems showed she had stress, treated for depression, going through therapy and that she had a kidney problem.

In late 1991 she had an argument with the President whom she accused of not sleeping with her and spending with sick Sally.

In 1992 she accompanied the president on almost every trip while at it a report surface that he was again enhanced or did some artificial insemination and in early 1993 she was visibly pregnant.

Robert jnr was born one of the aids pointed the love that the president have for the boy how he woke up when he cries, he wash him everyday and also stated that Grace seems to be having withdrawal syndrome since the birth of the kids and hardly takes care of him. In that year Russell Goreraza start staying with Grace”s brother Reward Marufu.

The file state that the relation between the Senior Airman and the President is okay.

In 1994 and 1995 she had two abortion which she claimed were miscarriage but there were the kids of Peter Pamire’s.

The president knew about the relationship between the two since late 80s.

Stanley Goreraza got divorced to Grace Mugabe on condition that he lie low, obtain some qualification , upgrade his Airman skills in friendly countries outside Zimbabwe on government scholarships, chose a couple of houses anyway in the world and a handsome yearly pay.

It was the following year 1996 that Grace had another pregnancy of Peter Pamire that he Peter threatened to expose their relationship, the last conversation they had three days before he left for South Africa for a business trip that was tapped in a hotel they were.

Pamire told her that he want her to keep the baby in which Grace argued that all the kids go through DNA and if they don’t match him(President) she is dead and him as well but Pamire said Mugabe wont do anything to him.

Pamire left for South Africa and on his way back the documents state that a covert operation was assigned to a Black Operation Unit to take action.

A short note from a Nathan Shamuyarira Jnr pointed that he was the sweeper (remove or plant evidence) soon after the operation. The file however doesnt states whether Grace kept the baby if she did then Chatunga is Pamire”s son and not Mugabe’s.

1997 two of her bodyguards died one in a car crash and another in a suspected food poison. There had imported 4 buses from the UK and the report state that there had got money from Grace Mugabe as there were reported to be in a relationship with her. Both were asked about it and admitted that on more than five occasion there slept with her but said that it was not their will as she threatened them that if they do not she would report them to her husband for sexual harassment. Besides she was paying them well on top of that.

In 1999 the then head of the first Lady security wanted an all women escort team but was refused again four CIO operative charged with protecting her died in a space of one year having gone through various disciplinary hearings but kept in her close protection team.

The head of security made a plea that maybe the DG should hand over the intelligence to the Minister as now his Security Details are offering to resign than to protect the first lady.

Rather her security team was put on a rotation system and some were even Ndebele’s who would pretend as if they cant speak shona with her again it didn’t work as they requested withdrawal from the detail, it was only in the whole of 2000 that she a couple of Angolans who were as tough as nail that no one in the close protection Unit died.

In 2001 she was at it again this time with James Makamba , four year prior to confirmation of their relationship she had a short relationship with him and source said she helped him sat up his business empire and also Joy TV.

Surveillance reports showed that Makamba would travel first before Grace follows alleged on a different passport to avoid detection.

The Central Intelligence compiled a dossier on her but no one wanted to make a move on her, also her link to Solomon Mujuru on a number of business ventures made it impossible to eliminate him as a number of people in the politburo had interest in his business empire and wouldn’t want him completely out of the way.

The first move on him was on Joy TV and he was told that his business empire will crumble but again he was assured by Rex Nhongo that he will get his protection.

Between 2002 to early 2004 she slept with Makamba more than twenty times some pictures in the file shows her in his blue shirt, some she is combing his beard with a brush.

As late as October 2015 , angry Grace pushed Mugabe to the ground after a misunderstanding  and the Presidential guard team had to interfere.

The rest are memory sticks that have passwords.

92-year-old Mugabe refuses to relinquish power, says until he dies