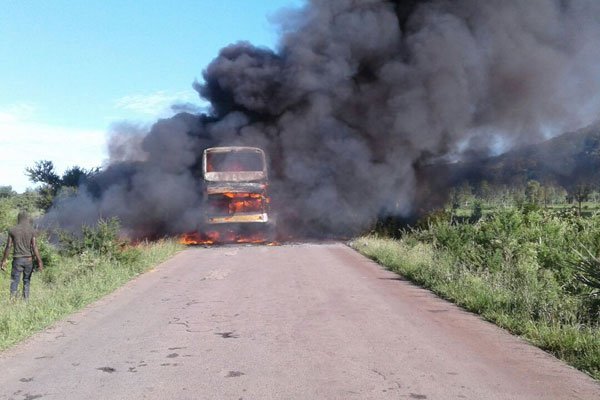 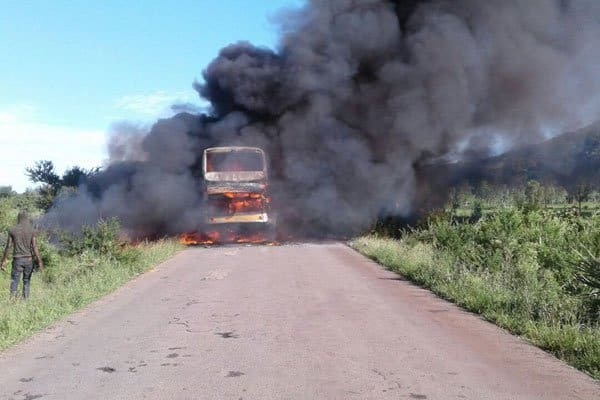 A bus is engulfed in smoke after a suspected gas cylinder burst killed at least 42 people and injured more between the Zimbabwean city of Bulawayo and the South African border on Friday, 16 November 2018 (Photo: ZBC)

At least 42 passengers were killed, Zimbabwe police said Friday, after a suspected gas cylinder exploded on a bus, with pictures showing the burnt-out wreckage of the vehicle.

“At the moment we know that more than 42 people died,” police spokeswoman Charity Charamba told AFP after the accident late on Thursday, with state media reporting that a cooking gas cylinder belonging to a passenger was believed to have exploded igniting a fire.

“Our police officers are at the scene,” Charamba added.

The state-owned Herald newspaper said on its Twitter feed that;

“it is suspected a gas tank belonging to one of the passengers caused the inferno in the bus.

“Dozens have been confirmed dead, and several others injured through burns.”

The Zimbabwe Broadcasting Corporation published photographs showing the destroyed vehicle on a highway between the South African border and the second city Bulawayo.

ZBC reported that injured survivors being treated at Gwanda town hospital alleged that a gas smell engulfed the bus after dark before the conductor switched on the lights and the bus caught fire.

It said about 30 people were injured, adding the vehicle was travelling from Zvishavane to the Beitbridge crossing via the town of Filabusi when the explosion happened.

Last week, 50 people were killed when two buses collided on a road between the capital Harare and the eastern town of Rusape.

President Emmerson Mnangagwa said road safety had to be improved after that crash.

Traffic accidents are common in Zimbabwe, where roads are riddled with potholes due to years of underfunding and neglect, and driving standards can be poor.

In June last year, 43 people were killed in a bus crash in the north, along the highway leading to neighbouring Zambia.