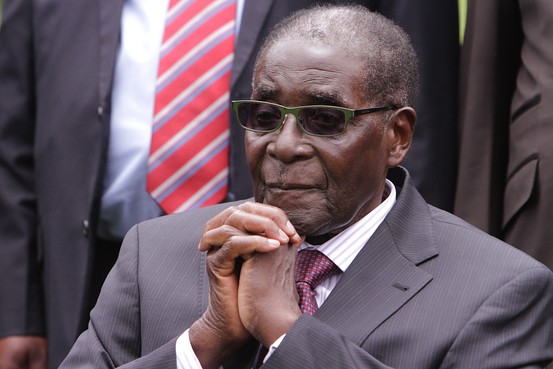 Zimbabwe President Robert Mugabe sits after a swearing-in ceremony at State House in Harare on Dec. 12, 2014.

A Chicago man was sentenced Tuesday to 15 months in prison for his role in a bizarre scheme to get U.S. sanctions on Zimbabwe lifted.

Prosecutors said C. Gregory Turner met multiple times in Africa with Zimbabwean government officials, including President Robert Mugabe and Gideon Gono, governor of Zimbabwe’s reserve bank, both of whom are under U.S. sanctions. He was one of two men charged in 2013 with violating sanctions by providing services to Zimbabwean officials.

U.S. District Judge Elaine Bucklo said, when imposing the sentence, that Mr. Turner acted out of greed, according to a U.S. Department of Justice press release. The judge said she didn’t believe Mr. Turner’s claim that his conduct was aimed at helping the Zimbabwean people, the release said.

Mr. Turner and his co-defendant, Prince Asiel Ben Israel, allegedly boasted of their ties with officials who had connections with then President-Elect Barack Obama when they struck a $3.4 million consulting agreement in November 2008 to lobby state and federal officials to oppose the sanctions, prosecutors said.

U.S. sanctions on Zimbabwe, in place since 2003, do not prohibit travel to the country, or for public officials to meet with those under sanctions to discuss removing them, but individuals are barred from lobbying on the behalf of those named to the blacklist, prosecutors said in 2013 when announcing the charges.

Mr. Turner was convicted in October of violating the International Emergency Economic Powers Act. Mr. Ben Israel pleaded guilty and was sentenced in August to seven months behind bars.

Despite the efforts of Messrs. Ben Israel and Turner, Mr. Obama renewed the sanctions in March 2009, as he has done annually ever since.WSJ