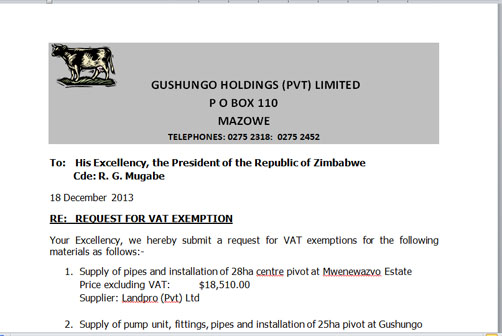 Former First Lady Grace Mugabe avoided paying tax for her companies, homes and toll gates charges during a time when her late national hero Robert was in power, theZimbabwenewslive can reveal.

Grace Marufu and late Robert Mugabe, owners of Gushungo Holdings with interests in dairy, did not pay taxes amounting to over US$1 million between 2011 and 2017.

According to the documents seen by this publication, between 2011  and 2017, letters from Gushungo Holdings Ltd, Grace Mugabe Children’s Home, Mwenewazvo Estate, Chishawasha School, Amai Mugabe Junior School and Borrowdale Residence were sent out by a General Manager only known as  S.Nhari to the then President Robert Mugabe asking for tax exemptions. Mugabe would, in turn, grant permission.

Other letters were sent by Farai Jemwa, an administrator at Grace Mugabe Foundation who sought assistance to remove the vehicle whose details are listed below from Diplomatic to civilian use.

“We also seek your authority to include the same vehicle on toll fees exemption and in the alternative the Mazowe tollgate as it commutes between Harare and Mazowe every day.

Most recently, on 08 OCTOBER 2018 MS L.M Nyanhongo wrote to DR Ray NDHLUKULA , who is the Chief Secretary to ED Mnangagwa requesting for VAT exemption for the Grace Mugabe Children’s Home.

Prior to Mnangagwa takeover, Grace would seek exemptions direct from her husband.

RE: REQUEST FOR VAT EXEMPTION

Your Excellency, we hereby submit a request for VAT exemption for the following materials required at the Grace Mugabe Children’s Home, a charitable foundation established by The Former President of the Republic of Zimbabwe Cde R.G Mugabe and the Former First Lady Dr Grace Mugabe to look after orphans and the underprivileged children in society.

In April 2019, President Mnangagwa’s government stopped funding dozens of pupils attending Grace Mugabe’s private school under the Science, Technology, Engineering and Mathematics (Stem) programme after it emerged that the school controversially benefited from the state-sponsored initiative.

At the time, Government said it was paying fees totalling US$3 800 per term for each of the 18 pupils enrolled at Amai Mugabe High School under the Stem programme.

The Stem programme was meant to benefit pupils attending government, council and mission schools but not elite private schools. A maximum fee the government was required to pay was US$1200 per child per term.

In a year government was paying Amai Mugabe High School a total of US$205 200 for the 18 students for three terms.

Following the withdrawal, the government advised parents to either pay for the fees individually or look for affordable schools for the Zimbabwe Manpower Development Fund (Zimdef) to continue to pay.

There was no comment from Bona Mugabe, who is the Principal of these Companies.

Below is a documentary on Grace Mugabe:

Below is a snapshot of some of the materials they sought exemptions from:

Who was Qasem Soleimani, the Iranian general killed in US airstrike?