Harare – Four Zimbabwe opposition activists were found dead near Harare on Thursday ahead of next week’s presidential election, the opposition Movement for Democratic Change said, blaming the deaths on the ruling party. 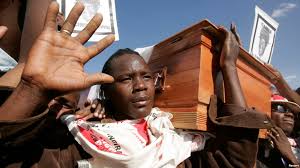 The four MDC youth members were abducted on Tuesday and their bodies were discovered in various locations southeast of Harare, said party spokesman Nelson Chamisa. Chamisa said the MDC suspected they had been beaten to death by Zanu PF youth supporters. “Now it’s about 70 we’ve lost,” Chamisa said, referring to the number of opposition supporters killed since the first round of the election on March 29. Zimbabwe police have also arrested one newly elected opposition lawmaker and placed six others on a wanted list, state media said Thursday, amid signs of a crackdown ahead of next week’s presidential election.

Shuwa Mudiwa, who won his seat for the Movement for Democratic Change IN March elections, was arrested on Wednesday for the alleged kidnapping of a 13-year-old girl earlier this month, the Herald newspaper reported. “He was arrested this afternoon in Harare and is still in custody. He will appear in court soon,” police spokesman Wayne Bvudzijena told the government mouthpiece. The six other newly-elected MPs are wanted on accusations of murder, public violence and malicious damage to property. Meanwhile, 11 suspected MDC activists, aged between 22 and 43 years, were arrested in the northern town of Chinhoyi on Wednesday for allegedly removing and defacing President Robert Mugabe’s campaign posters, the paper said. The MDC has warned of a crackdown ahead of the vote, with its number two leader Tendai Biti facing a treason charge and being held in prison.

Opposition leader Morgan Tsvangirai, who faces Mugabe in the June 27 run-off, has been detained five times as he has sought to campaign. Mugabe blames the opposition for mounting violence before the election and has threatened to arrest the MDC leadership. The UN has said that the president’s supporters were to blame for the bulk of the violence. Tsvangirai has said 66 MDC supporters have been killed in the lead up to the vote in a campaign of intimidation. Mugabe’s ruling party lost its parliamentary majority for the first time since independence in 1980 in the March 29 first round poll.-AFP