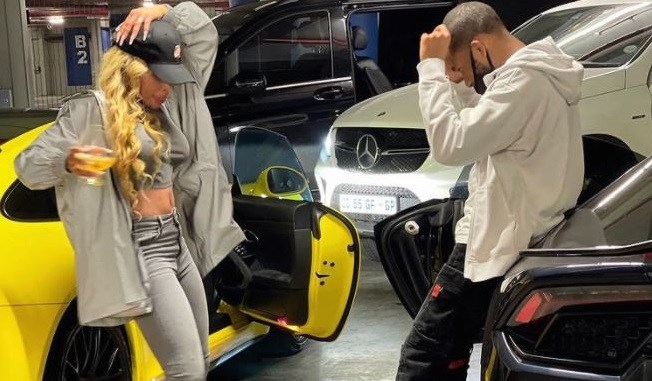 ZIMBABWEAN fugitive business tycoon Kudzai Terrence Mushonga, who is on the ZRP wanted list, has found warm love in the arms and heart of Khanyisile Mbau, a South African actress, television host and artist.

Mushonga said to have business interests in gas, petroleum and property. Also known as “Ndege boy’”, the 28-year-old fugitive has spent years of hiding from the arms of the law in Zimbabwe, only to now resurface on Khanyi Mbau’s social media accounts as the new bae.

He is rumoured to be the youngest African to man to own an airline. Mushonga and accomplices defrauded a Zimbabwean microfinance after borrowing large sums of money using fake company documents, then vanished into thin air.

According to the Sunday World newspaper of South Africa, Mbau quietly split from long-time boyfriend Tebogo Lerole months back.

Sources told the tabloid that the lovebirds have been casually dating for two months, but things became official last month when they decided to be exclusive.

“One source said they have been having a good time including cozy date nights and dining at expensive restaurants.

“Another source said they started off as friends and their relationship grew from there,” reports the Sunday World.

The source further said Khanyi’s friends really like him because they did not see a future for her with Tebogo.

“He takes good care of her and has been spoiling her with expensive gifts.”

According to another source, the couple met through a mutual friend and things became serious quickly.

However, the union lasted three years, and she has been on and off the market since, while Mthembu is now reported broke. But it’s Khanyi Mbau’s expensive tastes which have made many to conclude that Mushonga must be loaded.

Mushonga defrauded a Zimbabwean financial institution in 2016 with friends, then dramatically skipped the border into South Africa where he has business interests in gas, petroleum and real estate.

And the tycoon would not take kindly the accusations that he is a fraud.

“I was never or have never been arrested for those allegations. Please inform me which court date I skipped to label me a fugitive.

“Please show us the amount of bail I paid and to which court to be released 6yrs ago,” Mushonga clapped back at trolls on social media.

“Also note that the Herald article (about his fraud) came out 1.5 years after this happened because I had got into a fight with someone exercising their power on me.

“All these allegations happened when I had long left Zim. Which court docket shows I defrauded anyone money? You might as well publish it.” – Zimbabwe Voice

The case for a Zimbabwean revolution: Mnangagwa’s empty promises and blatant lies