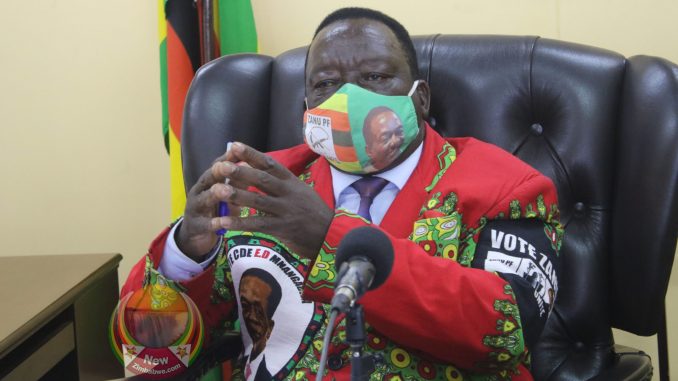 ZANU PF’s most powerful person, next to Emmerson Mnangagwa, the national commissar Victor Matemadanda has been poisoned.

Matemadanda has revealed that he was poisoned during last week’s Provincial Coordinating Committee meeting in Marondera which was also attended by the party leader, Mnangagwa.

Victor Matemadanda on Friday 20th Nov During the function and immediately just after Mnangagwa had flown off in his military helicopter, a suspected assailant whose identity could not be established at the time of writing, walked over to the place where the commissar was sitting down, and released a powder which made Matemafanda instantly dizzy, confused and then eventually seriously ill.

The assailant, who the man says he cannot remember as he, Matemadanda became instantly confused, and lost memory, had pretended to be assisting the commissar, saying “there is something on your cap let me help you.”

“While they ( the assailant) were doing this, a smelly powder was released from their hands, and immediately I became dizzy,” said Cde Matemadanda.

“The powder I inhaled disturbed me until I had to tell people I am now going to the car.

” As I sat inside the car I suddenly became very hungry and began sweating heavily;

” Then I told the boys I was with, let’s to go OK supermarket to buy some food; when we got there I couldn’t eat and wanted to vomit.

“That was on Saturday, and on Sunday I spent the whole day feeling like vomiting, and feeling a certain bitter taste in the mouth; I did not suspect anything at the time.

“In the evening on Sunday, that’s when I began vomiting, in fact Saturday I vomited 3 times in the night, in the afternoon I had vomited 2 times. On Sunday night I spent the whole night vomiting; this happening 5 times.

“My body started reacting and my face started swelling.

“I then approached a doctor who then attended to me.

” I think from the experience I once got in 2016, I then obtained the same treatment I once got back then,” he concluded.

The incident has left questions regarding who could have motives to poison Matemadanda. The attacker could be reacting to their disappointment over their failure during the ongoing district elections, which are happening around the country.

He was asked over the possibility that the man might be suffering from covid-19, to which ZimEye was told, “he was tested and was found to be COVID negative.”

Since independence 1980, every other political commissar has suffered either an assassination, or a humiliating ouster. The list of victims includes:

Engelbert Rugeje – who served after the 2018 coup, and was given a humiliating removal, and a few weeks ago had his house attacked by a 7 armed gang, one of whom found with a ZANU PF card.