The truth is now out.

All my questions have been answered. All along l was doubting that a Council decision could have allocated land belonging to someone else to Zaoga. I knew that there was an underhand influence in this whole Zaoga University Saga.

Minister of Higher Education Professor Jonathan Moyo has just confirmed on twitter that Zaoga DID NOT BUY the land but was actually allocated by the State and not by the Bindura Town Council.

We all know who the ” State ” being referred is. It’s actually Mugabe himself !!! Shockingly Mugabe sought to distance himself by saying “zvakakanganiswa kuti mupihwe land pano” yet it’s his Office that did all this.

This was further confirmed by Dr E Guti in a speech read on behalf of Dr Ezekiel Guti. She said ” Your Excellency Land yamakatipa Iya tavekunzi tibhadhare US $2.3 million “. This is a clear indication that Zaoga approached “Office of the President ” when they wanted land to build the University and not the Bindura Town council as per the Urban Council Act.

Prof Jonathan Moyo had a torrid time on twitter trying to explain to law abiding citizens, on what Constitutional grounds did Mugabe allocate land without the knowledge of the jurisdictionally mandated Council. 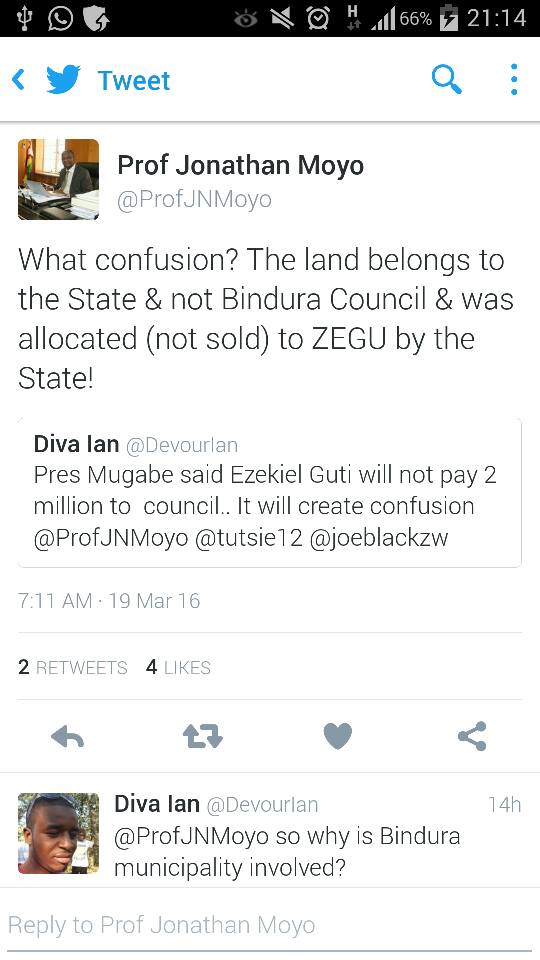 In his quest to defend his Principal, Jonathan Moyo sought to separate the “State ” from ” local government “. In all this he forgot that a state is made up of local, Provincial and state government. President Mugabe has no power to override local council in matters of land. In fact without a “Presidential proclamation ” publicly made, President Mugabe decision to allocate Zaoga land is illegal and unconstitutional.

This is not the first time a church has approached Mugabe to do favours for them. It seems as If churches know that Mugabe has no respect of the laws of the land and he doesn’t respect other arms of government, so they approach him to get what they want, thereby sidelining the relevant Authorities.

Last year Magaya was allocated land by the President’s Office to build his church and it later turned out that the land belonged to someone and the matter is currently before the high Court. This is the problem of ignoring local authorities.

I don’t see this case ending anytime soon. We are likely to see some of these decisions being made by the Presient being questioned once Mugabe is gone. Zaoga should explain why they approached the “President Office ” instead of the constitutionally mandated local Bindura Council. The truth is; it is Mugabe who double allocated land and not Bindura Town council because it was never involved.

Whatever the motive for Mugabe sidelining the Council in his decisions is clearly Political. Mugabe should have directed Zaoga to go back to the Bindura Council and submit their application just like anybody else. I have said this before and l will say this again ” l dont want to live in a society where if l comit a crime, if processes or things are not going in my favour, l approach the President or the Commissioner.

I want to live in a society where if l dont agree with something, the courts should be our last arbiter “. One Nigerian friend of mine once told me that in Nigeria it’s about who do you know and not what the law says. If a Nigerian is arrested by the Police , the first person he thinks of is who does he know in gvt who can rescue him.

Instead of approaching a lawyer to defend him in court, a Nigerian will start calling some Minister, Some Police inspector or even the Commissioner notifying him that he has been arrested can he please do “something “. This is now a cancer in Zimbabwe, why Zaoga keep on approaching the Presiddnt instead of presenting their case to the courts is so selfish. I never thought Zaoga , a Christian institution, would be so ignorant of the law.

To those who are praying for the mine owner to lose his case let’s not forget that the miner paid for the mining rights in the area and Zaoga was unconstitutionally allocated land by the President without knowledge of the relevant authorities (council ) and without any money being paid. Mugabe is not a Chief and he has no power to allocate land to anyone.

Here we are talking of legal facts and not “zvechijambanja or chigandanga chekugovana mapurazi “. I say this loudly Mugabe has no such powers to give land to anyone because he doesn’t own any land. All the land in Zimbabwe is under the jurisdiction of Council. Kana uchida kuvaka bhawa rako paChecheche you go to Chipinge Rural District Council, you don’t go to the President’s Office.

Ukaona wakuti kana uchida kuita a project you call the President Office , ignoring all institutions legally established for that purpose, just know that you are using mafia-style-approach to life and it won’t take you anywhere. Ndipo panotangira lawlessness ipapo.

Investors are reading all these stories of lawlessness. This miner could have been De Beers, Anglo American or even Old Mutual which could have bought the land as an investment property for speculative purposes. All investors want trust in the property laws of the country; you don’t want to invest in a country where whoever is close to the State House will always have his way thereby prejudicing you of your hard earned money.

Strive Masiyiwa spoke about all this “respect of the law and independent Judiciary”. He stated that he was thankful of the Nigerian and Kenyan Judiciary for standing up to his right when they were being trembled upon by the powerful political mafias.

We need to respect our own institutions. If you are the President, when you appoints a Reserve Bank Governor, you ask him to take oath on behalf of the people of Zimbabwe and it’s unconstitutional to then impose decisions on him.

The same applies to Councillors, they are voted by the local people to represent them, again it’s unconstitutional as a President to impose decisions on them for getting that they represent the very same people you swore to serve and protect and local government is actually a Constitutional office, it’s there in the Constitution. It’s Independence is clearly spelt out !!!

Funeral drama – Women take off panties, throw them in grave