In all his 92 years, Zimbabwean President Robert Mugabe has never faced a foe like Evan Mawarire. The 39-year-old Pentecostal pastor made his grand debut last week as the protagonist of massive protestsagainst the government, the largest in ten years, opening the latest act in Zimbabwe’s long-running drama of citizen revolt and government crackdown.

Pastor Evan strode on the national stage this spring, quite literally cloaked in the banner of Zimbabwean patriotism. A home video released on Zimbabwe’s Independence Day captures the moment: Wrapped in the Zimbabwean flag, Mawarire inveighs against the damage wrought upon Zimbabwe by criminally poor governance, putting in poetic form the nagging sense of shame so many in the southern African country share. Mawarire’s #ThisFlag campaign went viral, inspiring last week’s protests and landing him in jail Tuesday night after he drew the government’s ire.But then, almost as quickly as Mawarire was detained, he was released. The New York Times:

The pastor . . . walked out of the Harare Magistrates Court in the evening [Wednesday] as cars honked and hundreds of people holding candles cheered in celebration.

With a Zimbabwean flag draped around his neck, Mr. Mawarire sounded defiant, telling the crowd, “Let’s remain resolute.”The authorities had arrested him the day before and charged him with inciting public violence. But on Wednesday morning, prosecutors tried to charge him with attempting to overthrow a constitutionally elected government, a far more serious charge that would have made it more difficult for Mr. Mawarire to be released on bail.Judge Vakayi Chikwekwe ruled that the move by prosecutors was unconstitutional, explaining that the state “did not inform the accused of the charges he was facing at the time of his arrest.” As Mr. Mawarire was released on a technical matter, he could be arrested again on the same charges. 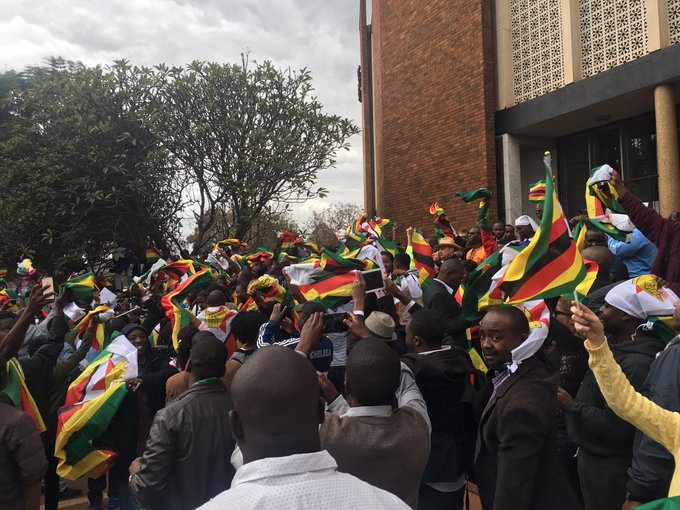 Mawarire’s detention and release point to a few observations particular to Zimbabwe and to one larger phenomenon sweeping across sub-Saharan Africa.First, the particulars. Mugabe remains deeply unpopular in Zimbabwe and while he can be brutal, the opposition still has some space to organize. The judiciary maintains a modicum of independence and is occasionally willing to contravene the executive (although, if new charges are filed, Mawarire could be headed back to jail). Zimbabwe’s sickly institutions, long bedridden due to corruption and poor governance, still show a few signs of life.More broadly, Mawarire’s story fits into a larger narrative: the rising tide of Christianity in sub-Saharan Africa. As Walter Russell Mead has written in these pages before:

The most dramatic change in the last 100 years is Christianity’s global surge.  In 1910, there were about 9 million Christians in sub-Saharan Africa, the Pew surveyreports.  Today there are more than half a billion.  This fact is of interest to geopoliticians as much as to believers: sub-Saharan Africa remains the scene of intense Christian-Muslim competition, a competition that frequently breaks out into violence.  The Christians appear to be winning the “race for Africa” at least for now as more than 60 percent of sub-Saharan Africans look to the Cross rather than to the Crescent.

It’s worth noting that much of that growth isn’t in your grandmother’s garden variety Christianity—instead, it comes from an entirely new strain, cultivated by African pastors and inflected with a distinctively African flavor. Evangelical, Apostolic, Pentecostal—these are the Christianities on the rise in Africa. Exhibit A? Mawarire’s charismatic style:

“In a society that wants to fight corruption, close the gap between rich and poor, and show more compassion toward those in need, Christians can play a constructive role,” WRM has written ofChristianity in China. But the same is true of Christianity in Africa. Expect leaders like Mawarire to keep popping up as leading figures of the opposition in the continent’s authoritarian regimes. Pastors have years of experience in public speaking and mobilizing people, a prominent bully pulpit to call out corruption and injustice, and faithful congregations who will carry on the cause if their preachers are locked up or gunned down.Of course, in the case of Zimbabwe, it’s too soon to hail the triumphant march of Christian soldiers against the ranks of Mugabe’s corrupt old guard. Christians, after all, are by no means immune to corruption (Mugabe himself is a practicing Catholic). And, as we’ve noted before, despite his old age Mugabe should not beunderestimated. The seven-term president has a distinctive knack for disarming threats and coopting rivals.When Joshua Nkomo, Mugabe’s onetime ally in the war against the white-minority Rhodesian regime, appeared to pose a threat in the early 1980s, Mugabe unleashed a North Korea-trained brigade to massacre more than 20,000 of his rival’s civilian supporters in Matabeleland. When so-called “war veterans” called for the seizure of white-owned farms and began to occupy some of them, Mugabe sensed that his base was deserting him, and brought the occupiers into the fold through his disastrous jambanja land reform program. More recently, when Morgan Tsvangirai’s opposition Movement for Democratic Change party challenged Mugabe’s rule, and forced its way into a power-sharing agreement with the government, Mugabe nimbly neutralized the threat posed by the MDC by luring it into shady dealings, which tarred opposition figures with the sticky pitch of corruption they had once sought to clean up. With tenacity and cleverness, Mugabe has outfoxed everyone who has stood in his way. All of his potential successors have watched Mugabe’s maneuvering with admiration and will no doubt attempt to mimic his moves when he is gone.Whether Mawarire overcomes the Mugabe regime or becomes its latest victim (or collaborator) remains to be seen. Rumors are swirling now that Pastor Evan has fled Zimbabwe; apparently “groups of men”have been paying menacing visits to his home and office. In the short term, the dispassionate observer would not bet against Mugabe. The Gordian knot of corruption, vote-rigging, and intimidation that he has so skillfully fastened will take years to unloose, not an instant.Nevertheless, the charismatic pastor and the #ThisFlag movement he has inspired are emblematic of Africa’s future. Christianity has been at the heart of transnational social reform movements from abolition to women’s suffrage to civil rights—and in Africa, Christianity will be at the fore of civil society efforts to expand democracy and human rights. The coming decades might just give richer resonance to the words of one beloved hymn:

When tyrants tremble, sick with fear,
And hear their death-knell ringing,

Until that day comes, even Mugabe can’t keep Pastor Evan and his flock from singing.