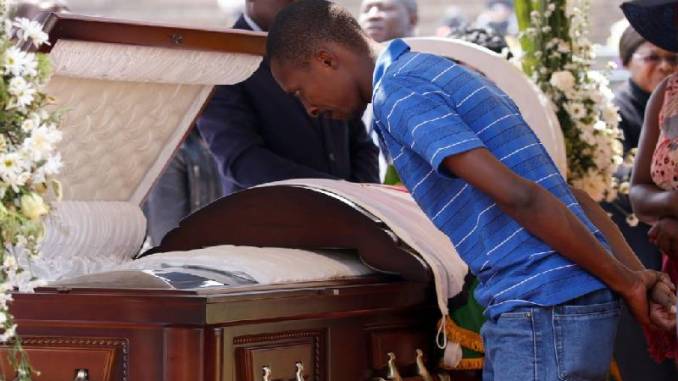 A traditional chief has ordered former Zimbabwean First Lady, Grace Mugabe, to exhume her husband’s remains at the family homestead in Mashonaland West and rebury them as he was laid to rest in a place violating the area’s burial cultural norms.

But the Mugabe family is breathing fire, saying they will defy Chief Zvimba’s order as he has no jurisdiction over the matter.

In a letter written by Chief Zvimba, whose agents delivered it at Mrs. Mugabe’s residence, the chief fined her five cattle and a goat for burying the late former president Robert Mugabe at his homestead instead of the family’s cemetery in Kutama village.

The late president’s nephew, Leo Mugabe, has fired back saying they will fight the case to the bitter end.

“It’s a ruling against a widow and the wido has nothing to do with the burying of her husband … This judgment is irrelevant, if you were to ask me, because in any case, Chief Zvimba does not preside over cases here.”

In an exclusive interview, Mugabe, who is the former president’s nephew, said Chief Zvimba’s order would be taken to the highest court in Zimbabwe if the matter is not resolved at village level.

“There are the ones who were pushing for the Heroes’ Acre and the immediate family was saying ‘no’ we must follow the late president’s wish. They won’t bury him at the Heroes’ Acre against the late president’s wish. That’s where all this originates from. Chief Zvimba did not attend the funeral. So, he wants to be relevant by being seen to be attending to what he has always wanted. It’s not going to happen.

“This case should have gone to the kraal head first. Its like taking a case to the Supreme Court at the first instance and after the Supreme Court it won’t go anywhere. You have to follow the hierarchy of the courts. There should have gone to a kraal head and then to a headman and then Chief Peperere. That could have been the right thing to do. They didn’t do that. Even if it was the chief to go to, his judgment is not final because there is the Magistrates Court, High Court and the Supreme Court. If it is a constitutional matter, which we think it is because he has no jurisdiction to handle the case, we would go to the Constitutional Court. This is far from over. We are ready to take him on.”

He dismissed reports that Mugabe was buried with a mystic scepter, which is wanted by some top government official.

“That’s all rumors, there is nothing like that. These are people that are just speculating that he had a tsvimbo (specter). Who would have given it to him? If he had been given a tsvimbo and they know who gave him, they must go to get another tsvimbo from the same person. This man was a Roman Catholic, was a Christian and did not believe in all these tsvimbos.”

He noted that Mrs. Mugabe is currently undergoing treatment for an undisclosed illness in Singapore where he husband died of cancer.

Information Minister Monica Mutsvangwa did not responded to questions sent by our correspondent regarding this issue. Presidential spokesperson, George Charamba, was also not responding to calls on his mobile phone.

The Zimbabwean government wanted Mugabe to be laid to rest at a special mausoleum at the National Heroes’ Acre but his family refused saying he wanted to be buried near the grave of his late mother, Bona.-VOA