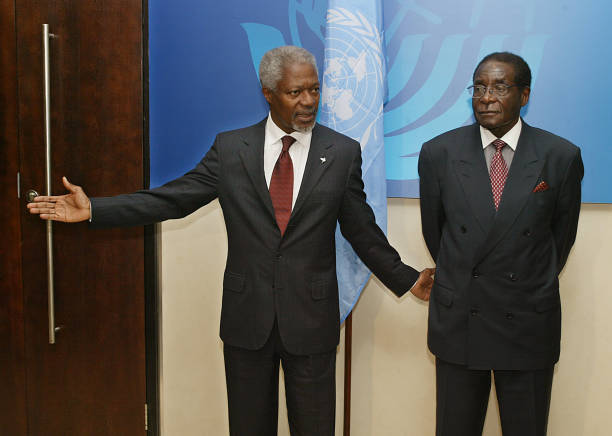 Three years after a top  Ghanaian Legal practitioner Yoni Kulendi has revealed that president Robert Mugabe holds Ghana’s diplomatic passport, a Zanu PF official has revealed that the underfire nonagenarian leader is seriously considering going back to the nation where he taught and met his first wife Sally Hayfron in the 1960s.

According to Kulendi , over the years Ghanaian diplomatic passports have been given to several foreign nationals, including former South African president Nelson Mandela and Zimbabwean president Robert Mugabe because of specific contributions or roles they are playing in the host country.

Mugabe has become a citizen of Ghana in 1950.

Citing examples, the legal practitioner revealed that, “People like Mandela, Mugabe they all once upon a time held Ghanaian passport not because they were refugees but because Ghana was collaborating to advance a certain international policy agenda that we believe in.”

It is not clear what the specific contributions Mugabe made in Ghana.In 1961 Robert Mugabe married Sarah Francesca Heyfron after meeting at Takoradi Teacher Training College where she enrolled for a teaching certificate and Mugabe was teaching in the same country.

Sally then , 30 eventually wedded Mugabe in April 1961 in the the Salisbury city of Rhodesia (now Harare). The couple were blessed with a baby boy in 1963 ,Nhamodzenyika .

Nhamo however passed away in 1966 in Ghana after succumbing to Malaria.According to some documents  available to this paper ,Nhamodzenyika was not Sally’s first Child.In February 1971, Sally had a miscarriage .She was previously married with a daughter.

It was only in 2013 during  an interview with South African journalist Dali Tambo the Zanu PF leader  claims he revealed his affair with Grace to Sally who “accepted the new relationship” before she died of a kidney failure in 1992.

Mugabe was in 2010 quoted in his native tongue Shona, saying , “Tiri vanhu vemeso meso. Chakabaya chikatyokera, tozviita sei?,” which translates into English as, “We are easily tempted by different women. Once it is in and it has stuck right inside, what else can we do? Its an addiction, what can we do about it?”.

Mugabe’s government had not until 2013 allowed dual citizenship. Ordinary Zimbabweans abroad have no voting rights.

Ghana allows its citizens to hold dual nationality, unless they are seeking public office.It is not clear whether the 91 year old president still have the document.